Why is the US rating AAAA+ after they printed trillions of dollars out of thin air, and bailed out the US stock market? [closed]

Ask Question
Asked 10 months ago
Active 9 months ago
Viewed 101 times
-4
$\begingroup$
Closed. This question is opinion-based. It is not currently accepting answers.

When any other country tries to print, there's huge inflation, devalued currency, bad ratings from rating companies (mostly US go figure why?), interest rates increases. But why don't these happen to the USA ?

Update (based on that non-answer from @1muflon1) :

First of all, I wrote the AAAAAAAA++++ in the title on purpose to make the title more flashy. I know AAA is top grade.

Second, printing money is a cause of inflation and if "printing money" does not affect nations ability to meet its debt obligations per se I would like some details there because of course, you can reimburse any debt if you print money, duh.

My question is still valid, and NOT opinion based. Can someone explain how a country can print that much money - without any consequences ? I'm not asking for opinions but asking for economical insight on how this actually works.

money-supply exchange-rates
Share
Improve this question
edited May 7 '20 at 11:29

First of all let's get our facts straight as it is not proper to argue based on incorrect premises.

Now to answer your question why US has high ranking, it's important to understand what rankings are. According to Fitch (and other agencies use very similar definitions):

Credit ratings are used by investors as indications of the likelihood of receiving the money owed to them in accordance with the terms on which they invested.

Inflation, devaluation of currency and "printing money" do not affect nations ability to meet its debt obligations per se. Hence the US ranking is high because that ranking agencies think the probability of default on its debt by US is virtually zero.

Other countries are ranked in the same way. Although inflation has nothing to do with probability of default (in fact inflation helps to avoid default of a country), often countries that mis-manage their economies and run unsustainable debt also run higher inflation, in order to monetize at least part of their debt and slow its growth.

Hence you are confusing causation with correlation. Countries with high inflation don't have low rating because of inflation, they have low rating because of very high probability of default. Because they run huge deficits and have huge debt, they often resort to inflation in order to borrow less, or to get funds for their nominal obligations in their own currencies, when they can't even get people to lend them money.

In Response to your RE:

Inflation has multiple consequences for a country. Inflation dilutes people’s money worth, can harm people who rely on fixed incomes not adjusted for inflation (for example retirees). High levels of inflation create a lot of uncertainty and might lead to lower economic welfare. Moreover, once we get to hyperinflation, the whole monetary system might break down and people may revert to barter. Although here it’s important to note that for last few years US inflation on average was very close to 1-2%, which is considered optimal by economists, since low inflation can bolster the economy (see the picture below). 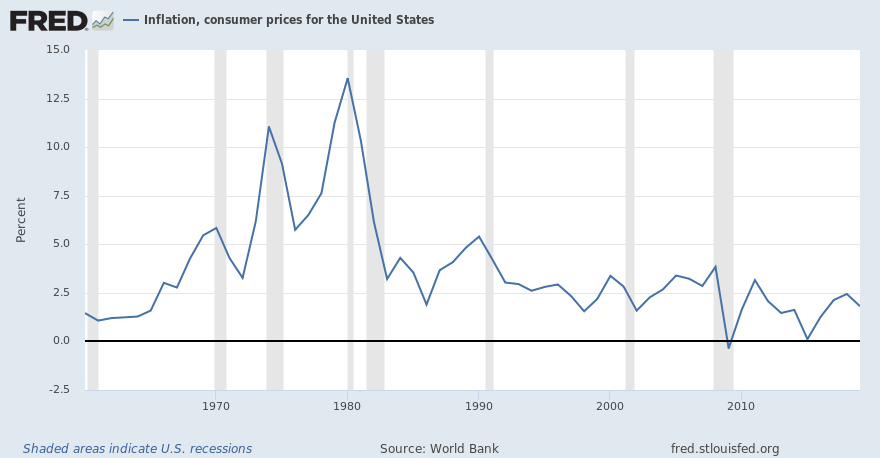 Furthermore, your question was about US credit rating not about economic consequences of inflation.

You have to understand that credit ratings are not marks for good economic policy or anything like that. Technically even countries that organizes its economy inefficiently and badly could get top credit ranking if people trust the country to always pay its debts. Inflation does not harm countries' ability to pay its debts as long as country issues debt in its own currency.

Conversely you can have economy run by the most enlightened policymakers, but if the country is not trusted to pay its debt the debt ranking will be low. For example, in its past it opportunistically defaulted multiple times. Or there is ongoing civil war and nobody knows if the new government will still pay the debt of old one etc.

The debt ranking only solely rank countries on probability of default. If the probability of default is low ranking will be high - this is not my opinion that’s what debt rankings are. They are not some measure of virtue, quality of policy etc other than the ability to pay its debts. A medical analogy would be measuring temperature - you might suffer from serious disease but your temperature might be totally fine. In similar ways your economy might have tons of structural problems (although I don’t claim whether US does or not - just saying this for the sake of analogy) and credit ratings will be still fine, if economy’s ability to pay its debt is good, the same way as thermometer will show normal temperature even if you are terminally ill.

To argue that inflation should decrease the credit ranking of a country, you would have to prove that inflation somehow worsens the country’s ability to pay its debt in its nominal terms. To my best knowledge there is no evidence in economic literature that inflation would do that.

Not the answer you're looking for? Browse other questions tagged money-supply exchange-rates or ask your own question.