Under what BLS line do "people who want a job but haven’t searched in the last 12 months" show up?

I'm trying to understand how this CNN math was derived:

This category — jobless people who “want a job now” but “did not search for work in the previous year” — has hovered around 3 million workers per month for most of the last decade, but it suddenly more than doubled to 6.9 million in April. Because these workers didn’t search for new jobs in the last 12 months, they were not counted in either the unemployment rate or the U6 underemployment rate.

But where are these 6.9 million reported by the BLS? I see BLS says "discouraged workers" are actually included in U6...

So where are these 6.9m "people who want a job but haven’t searched in the last 12 months" reported by the BLS?

That's reported in A-38 under "not in the labor force" but "want a job" and "did not search for work in the previous year". The line/figure doesn't have a U-style indicator. 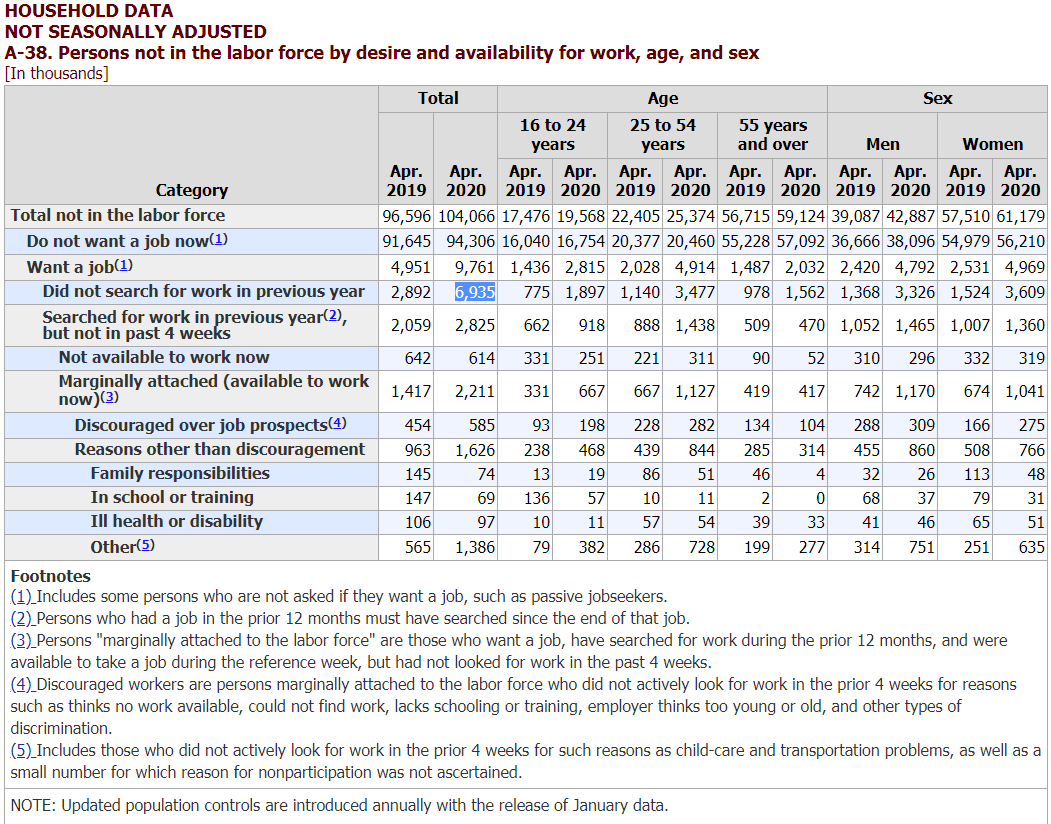 Not the answer you're looking for? Browse other questions tagged labor-economics statistics unemployment united-states or ask your own question.

11
Is 'full employment' synonymous with 'the natural rate of unemployment'?
1
Equilibrium value of $b$ (market tightness) in a search model
6
Why has increased productivity over the last 100 years not affected how much people work?
1
Theoretical/Empirical Arguments for Migrant Workers in the US
1
If someone stays at home because they can't find the type of job they want, are they included in unemployment numbers?
2
Name of phenomenon where migrant workers receive decent wage but absolutely no chance of getting any government benefits
0
What is the probability of an unemployed worker receiving no job offer during a time period?
0
What are the values in brackets under the estimators value representing?