Econometrics - Why does adding a dummy varaible improve my Ramsey RESET test result?

As I understand, the Ramsey RESET test (although called ovtest on Stata), is not actually a general test for omitted variable bias. Rather, it is a test for misspecification. Specifically, if the model is properly specified, "no nonlinear functions of the independent variables should be significant when added to the estimated equation". So now I'm confused because after estimating three models, I get these results.

So according to this, the null of no omitted variables (or no misspecification) will be rejected for the first two but not the last (at 5% sig. level). Yet, the translog is essentially the log-log with higher powers of the independent variable, so I'm confused as to what to conclude from this. I'm inclined to say that the dummy variable was an important omitted variable, but then again RESET is not a general test for OVB.

Perhaps also worth mentioning is that I am assuming I can conduct the ovtest as a test for endogeneity to check the OLS assumptions (because this is the only relevant test we were taught that isn't the 2SLS/Wu-Hausman).

As I understand, the Ramsey RESET test ... is not actually a general test for omitted variable bias. Rather, it is a test for misspecification. Specifically, if the model is properly specified, "no nonlinear functions of the independent variables should be significant when added to the estimated equation"

This is completely correct, the idea of the RESET test is that if you have following some model:

The RESET test will test for correct functional specification by estimating auxiliary regression:

and then testing with an $F$ test whether $\gamma_1$ or $\gamma_2$ are statistically significant. Hence, what the test actually does under the hood is to check whether the squared predicted values and cubed$^1$ predicted values can still explain some variation in $y$ after accounting for all the independent variables.

This can only be the case if the original model did not already explained $y$ fully as the original model is still included in the RESET test and hence the RESET test tells you there is some functional miss-specification. The intuition is that if non-linear combinations of the explanatory variables (through $\hat{y}^2$ and $\hat{y}^3$) have any power in explaining the response variable, the model is misspecified in the sense that the data generating process might be better approximated some non-linear function.

However, the RESET test does not tell you what kind of miss-specification it is. It can be an omitted variable, it can simply be the case that data are highly nonlinear, it can be there is some multiplicative relationship between the variables so log-log regression where everything is log linearized would be more appropriate and so on.

This being said it is fully possible that the miss-specification was the fact that you omitted a dummy variable. Dummies actually help to solve certain kind of non linearity. Having a dummy variable allows regression to have not just 1 intercept but two separate intercepts. For example, if you are examining the regression of wages on education and dummy is female, it allows for all females in the sample to have different intercept than Males (see the picture below I took from Wikipedia). In essence the dummies allow you to control for a non-linearity in data as you can imagine there being two data clusters one around the line with female dummy set to 1 and one around the line where female dummy is set to 0 (i.e. the male line). In fact data where you need to control for some qualitative state like female and male can sometimes even look in a way look like there is quadratic or cubic relationship if you plot them on scatter-plot.

Consequently adding the dummy might have genuinely solved the problem. An important caveat is that a lot of other things can get wrong in statistics so there could be other problems to see that one would have to examine the whole estimation. For example, there might be some outliers in your data that RESET test confuses for nonlinearity. This being said it is entirely possible the dummy variable solved the problem. 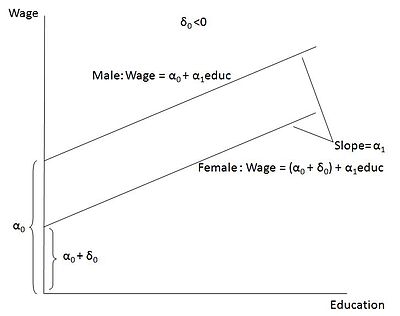 13
Econometrics: Is elasticity meaningful in my, or any, regression?
13
What happens if the "control variables" are also endogenous?
3
Does it make sense to 'deflate' a sectoral price index in a regression analysis?
4
Why does adding a quadratic term to a regression change unrelated coefficients?
3
Interpreting correlation between fixed effect and explanatory variable
2
Johansen test explanation
1
Why does the variable become insignificant after adding mediators?