Why does the aggregate consumer spending decrease due to to lower expected future disposable income instead of MPC?

This illustration is from Krugman's macroeconomics textbook, it's supposed to illustrate following situation (assuming that it happened for many people):

Conversely, suppose you have a good job but learn that the company is planning to downsize your division, raising the possibility that you may lose your job and have to take a lower-paying one somewhere else. Even though your disposable income hasn’t gone down yet, you might well cut back on spending even while still employed, to save for a rainy day.

In other words, the shift allegedly happened due to bad news about expected future disposable income. 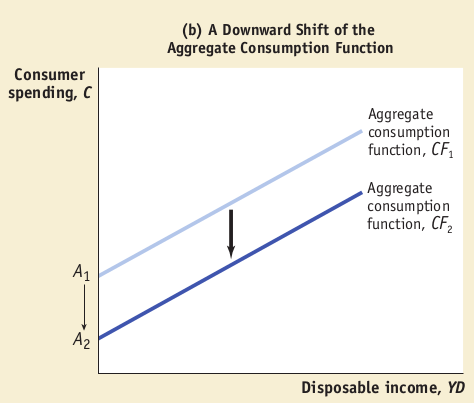 What I imagine will happen instead is that the marginal propensity to consume will decrease, increasing savings of people before the storm arrives, consequently changing the slope of the (aggregate) consumption function.

I understand that it's a textbook, so my reasoning must be wrong and the textbook must be right, but I fail to see mistakes in my reasoning.

This is sort of correct, but not completely. In a narrow sense autonomous spending is a persons spending when her or his income is 0. As you mentioned consequently many textbooks use examples like people always must eat even if they dont earn any money. However, that suggest that autonomous spending is set at a bare subsistence level and that is not true.

It was already recognized by Adam Smith in his magnus opum the Wealth of Nations that what is and what isnt necessity, and thus something that would determine autonomous spending, is context dependent. As Adam Smith writes:

linen shirt … is, strictly speaking, not a necessary of life. Greeks and Romans lived, I suppose, very comfortably though they had no linen. But in the present times, through the greater part of Europe, a creditable day-labourer would be ashamed to appear in public without a linen shirt, the want of which would be supposed to denote that disgraceful degree of poverty which, it is presumed, nobody can well fall into without extreme bad conduct.

Hence, autonomous spending can change and it is dependent on the 'opulence' of society in general as well as of the individual. For example, if you would be a relatively rich commodity trader and you would be fired from your job (hence reducing your income to 0) you would not dis-save just to consume on subsistence level, but dis-save enough to maintain the minimum you would consider necessary for yourself. If you expect that long term you wont be part of the upper status class but will have to become middle class person you can move your autonomous spending to the level consistent with whats necessary for such person to live. Hence changes in expected income can move the whole consumption function up and down.

The slope of the consumption function (or the marginal propensity to consume) changes when person decides to consume smaller or larger fraction of their total income not just when consumption falls. For example, if your income is 1000 and your MPC is 0.6 you consume 600 and save 400. If your income is 500 you would consume 300 and save 200. In such example income changed but MPC remained the same.

MPC can change with income but empirically the poorer people have higher MPC than richer People. I dont have the Krugman's book but many textbooks include examples where the MPC is hold constant by assumption as a thought exercise and only changes to income are considered in similar fashion.

However, I also agree that the Krugman's wording is confusing as he talks about "saving for a rainy day", which can to many readers suggest MPC should decrease.

Not the answer you're looking for? Browse other questions tagged macroeconomics microeconomics consumption or ask your own question.

1
Monetary Policy - How can increasing interest rates cause higher inflation in the short term?
1
Why do we model that higher government involvement increases output?
5
Does savings lead to investment in physical capital?
5
S=I in a closed economy
0
Does diminishing government spending lead to a reduction in trade deficit?
1
Basic question on S=I
2
Does levying a new tax on production increase GDP?
0
why does income of executives level out in the long term after tax increases?