I get that people buy long term government bonds, because of how safe it is, and if there would be a recession the government would just print more money and could pay it back.

But why would anyone buy a bond, that yields a negative return? If i would just keep my money in fiat, it would just depreciate in the 10 years, but after the 10 years it would still be more than investing it in a safe negative rate.

interest-rate government-debt bonds
Share
Improve this question
asked May 21, 2020 at 20:19

Some pictures and text are from Schroders, Marketwatch and other websites, but I don't remember all them.

Of note, Germany first sold negative-yielding bonds in Aug 2019, €2bn worth of 30-year bonds that offer no interest payments at all.

Cash is obviously most liquid, but some central banks like Japan impose negative interest rates on cash deposits, which trickles to the rate banks charge institutional investors.

Then highly liquid but only slightly negative yielding government bond looks better! Because the UK government unlikely will default, bond buyers are just paying a small sum to the government to guard your money, like in a vault!

2. Wagering that there are other “bagholders.”

Investors who buy negative-yielding bonds are betting on the value of the securities to keep rising. Although investors buying bonds with subzero interest rates are paying for the privilege to hold a bond, they can profit way above their cost if the security’s price rises.

When prices fall, most asset classes don't perform well in deflation. An exception are fixed interest government bonds! Because they fixed their coupon and principal, they retain their value and will positive real (inflation-adjusted) return, if inflation $<$ their yield. In other words, a negative yielding bond can positive real return if there is deflation. So you can hedge against deflation with negative-yielding bonds.

Negative yields don’t mean negative income for some bond buyers. Unlike European and Japanese investors, US investors are often paid to hedge against fluctuations of foreign currencies because U.S. interest rates are much higher than in other developed markets like Europe and Japan. Currency hedging can annualized return 3% for U.S. investors, like American fund managers, buying negative-yielding euro-denominated debt like European government bonds, according to Jens Vanbrabant, senior portfolio manager at Wells Fargo Asset Management. 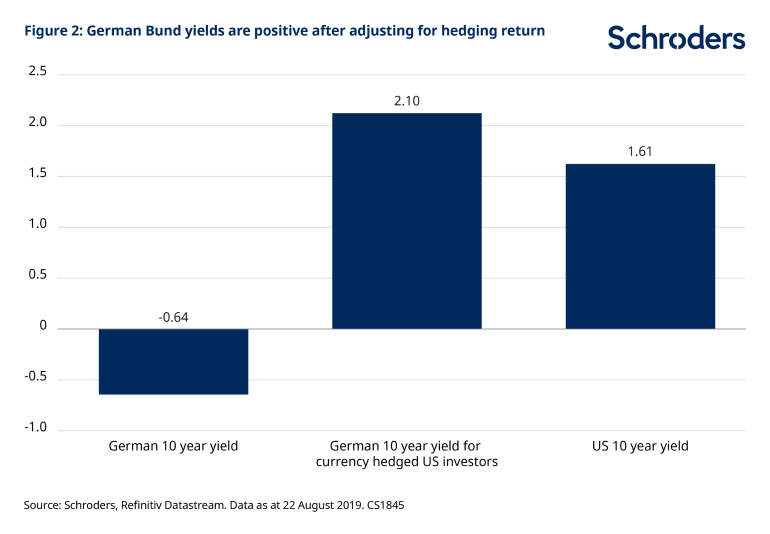 Traders like volatility to a degree, but they try to diversify the risk so their portfolios aren’t fully exposed to the market's unpredictability. So buying notoriously safe bonds is a risk-averse strategy. You'll lose some money for that safety, but that loss can constitute ‘over-performance’ if other asset classes tumble. When risky assets sell off, negative yields on government bonds may be overshadowed by their proven ability to rally during recessions. Even at negative yields, bonds still are important. Figure 3 by Schroders proves the 3-year rolling correlation between German Bunds and the German DAX stock market index. The two strong negative correlated, if you overlook the period between 2014 and 2017 when the European Central Bank’s (ECB) quantitative easing raised higher bond prices (lower bond yields) and higher stock prices. 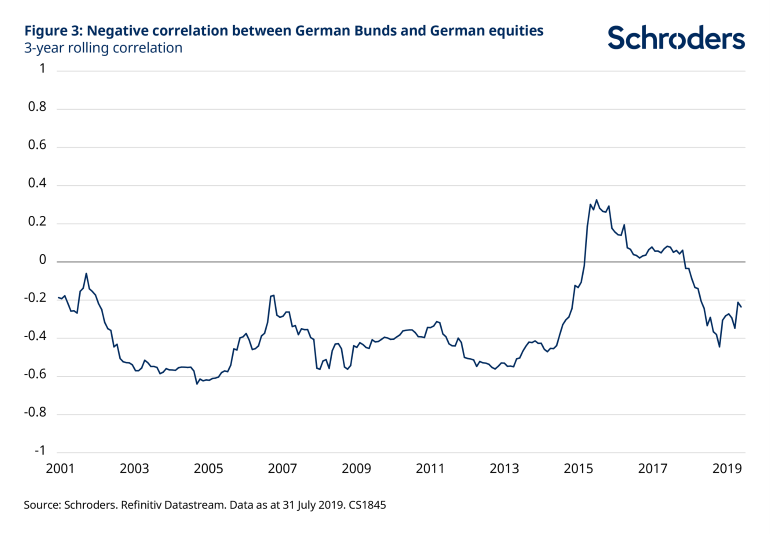 Bonds perform well when equities don't, vice-versa. In times of distress, you must reduce risk like this! If you are running for safety, capital leave stocks to government bonds. Even if negative-yielding bonds lower your return compared to normal conditions, they can still reduce portfolio risk.

6. Roll down the yield curve later.

You're assuming the bondholder is holding it long term, but many don't.

In periods of uncertainty, demand for bonds increases, which makes their price increase. So you can profit from buying and selling government debt. If you think this volatility will last, buy bonds now in the hopes that more investors flock to them later. You don't even need fellow investors to buy them! The central banks may be the ones to buy bonds to try to stimulate the economy.

Bond buyers can take advantage of the yield curve’s slope, which still can be steep even for negative-yielding bond markets in Germany and Japan. For example, a trader can buy a negative-yielding 3-year bond and sell it after a year. Since debt prices inversely correlate with yields, all else being equal, the value of the 3-year bond should be higher than, for example, a 2-year bond.

So long as shorter-term bonds' interest rates are more negative than their longer-dated counterparts, the long-term bond's price should rise closer to maturity. But they can profit from this “rolling down the yield curve” as a short-term strategy, and must sell the bond well before maturity, because the bond will trade only at par when it expires.

7. Some institutions are legally required to buy bonds! Liability matching with negative yields

The other reasons are about speculation or managing risk. But institutions can be legally mandated to buy bonds with negative yields.

Certain institutions must follow rules dictated by the banks, pensions funds or insurance companies who provide the bulk of the capital. Those rules mandate the managers to invest just in certain things like investment-grade bonds. Regulators force some clients to buy certain assets, like banks can only buy liquid assets.

Liability-relative investors, such as insurance companies and pension funds, don't care the absolute return or yields from bonds. They often buy bonds to “match” their liabilities. The present value of these liabilities is calculated in many ways, but factors in government bond yields. For example, in Sep 2009 in the euro area, insurance industry used negative rates up to the 11 year maturity point (Source: EOPIA. See data from 31 July 2019). These liability-driven market participants can buy negative-yielding German Bunds to match a future liability . Their values will move in tandem with each other. If they don't buy negative matching assets, they'll be exposed to significant risks if interest rates fell further.

There are several reasons why it makes still sense.

Under most circumstances, bonds is the most secured asset deposit method.

The pricing power that the government uses to push negative rates comes from its strong resilience to crisis relative to other institutions. The other extreme is also true: if the government is facing insolvency and its bond carries huge risk, then their yield skyrockets.

The reason nobody else has cited: repo collateral.

"Collateral calls mean in some cases using gold as a last resort (which gets dumped immediately) and in others the buying of pristine collateral at any price. Gold is slammed while T-bill prices skyrocket, their yields plummet. For those unlucky enough to have neither option in front of them, fire sales of assets including stocks and other risk credits...

... Given these market fire sale conditions, obvious signs of gross systemic illiquidity, the Fed’s auctions should be bid full up to the limit each and every one. The demand for liquidity, any spare liquidity, is through the roof curiously everywhere except here.

The answer can only be collateral. In order to bid for the Fed’s bank reserves in any of these FRBNY operations, you have to post some of eligible MBS, agency debt, or UST’s. And when you do, whatever collateral you put up becomes encumbered (which means no repledging)."

A debt instrument, even if negative yielding, can still provide fuel for "rehypothecation", esp. in the off-book, unmeasured by monetary aggregates, shadow banking / eurodollar system.

... what you'll almost never hear is the idea that quantitative tightening, or the easing of quantitative easing - which tightened supply in the bond market - might have contributed to overnight repo rates touching 10%. Note that this also impacted the actual IOER, threatening to "uncork" the real overnight interbank rate. This would mean total loss of control by the Fed.

Keep in mind, price is inverse to yield. More supply -> lower price -> higher yield. If you look at the yield of the benchmark US 10 year over the last few years, you'll see it climb into autumn '18, which was the first "blip" in the repo market. It made a double top around 3% with its 2014 high, and has been tanking ever since.

Not the answer you're looking for? Browse other questions tagged interest-rate government-debt bonds or ask your own question.

9
How can nominal interest rates be negative?
7
Why aren't perpetual bonds more common?
1
In quantitative tightening do banks have no choice in refusing to buy bonds from Central Banks (mainly Federal Reserve)
3
Why is national debt bad if the central bank can keep buying bonds?
5
Why don't governments exploit negative interest rates more than they currently do?
0
Why do commercial banks buy government bonds at negative interest rates instead of keeping cash?
1
Dynamic of 10 year UST given supply shock of the bonds that the Fed will buy into
0
How are sovereign bond interest rates determined?