Bananas and oranges in communist countries

This is a question I wanted to ask for a long time. If you check the GDP or East Germany in 1989 and compare it to that of banana-producing countries you can see:

With these numbers, trading something for a banana should have been possible. The East German was better off than an Indian or Chinese, not to mention other banana-producing nations like Ecuador. I know that foreign currency was in hot demand in communist countries to repay debt, so maybe an account-deficit is the reason why the East Germans could not buy tropical fruits (i.e. they lacked the means to trade, foreign currency)? Still, these numbers make me wonder. Deals could be made in the banana-producing nation's currency. Some banana producers were/are communist. Maybe the numbers are incorrect?

EDIT: Here is a relevant quote:

Bananas had been rare in the GDR because the imports, coming mainly from Ecuador, were limited due to lack of convertible currency.

Obviously, I disagree, there is always a way to pay and Ecuador was not the only producer. Note how West German ads made a permanent impression on the East Germans:

Today the consumption of bananas in East Germany is 20 percent higher than in West Germany.

Also, the all-important image from those days: 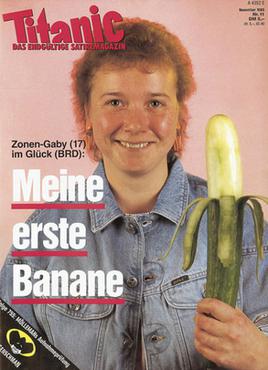 As this article from Financial Times shows, there actually were some bananas in East Germany.

Near the queue, locals were doling out used toys and bananas (the West Germans believed the East Germans didn’t know what bananas were). “But we had bananas from Cuba,” Meinfelder says in exasperation.

So there were bananas in communist countries but there was a shortage of them, and as with other products their availability for you dependent on your contacts and what (political) class you were member of (shopkeepers would often set aside high in demand products for friends). Prominent members of party had access to things ordinary people not in special shops reserved for them and so on.

Because, centrally planned economies are very inefficient when it comes to aggregating the information about what consumers want compared to market economies which aggregate the information using price system. Moreover, price system provides not just information to market participants but also gives them incentives to behave in a way to avoid surpluses and shortages on the market, whereas in the centrally planed economies there are no efficient mechanisms to achieve that.

For example, central planners might decide that the quantity of bananas they want to import should be some $x$ based on their calculation of how much bananas an average person could eat in a year. Afterwards, the central planners decide on price not in a way which they think the supply equates the demand (and in fact central planners are even not able to get such information since market mechanism is absent - so they cant do that even if they would wanted), but in a way they believe it is appropriate by making guesses or following some political/ideological/moral criteria.

But if someone just arbitrarily decides to set price to $\$20$ - maybe the political leadership wants to make bananas affordable to everyone, the demand for bananas at $\$20$ will be $80 = D_b(\$20)$ while the Cubans will only be willing to supply $10$ bananas $S_b(\$10) = 10$. Hence people will want to buy 80 bananas but stores will only have 10 and there will be shortage. During shortages goods are often being allocated through personal favors, or first come first served system, or goods might be reserved for members of 'upper class' (i.e. politburo) and so on. This is why many communist countries experienced long ques shortages and economic malaise in general.

This problem is endemic in Communist countries. I grew up in Cuba in the 1970s and we had the same problems with temperate fruits. Apples and pears, and even strawberries which should grow in Cuba were virtually nonexistent and impossible to buy.

I think the other answers are missing a crucial reason for these shortages. The main reason is what @1muflon1 said about centrally planned economies being inefficient at figuring out what people want, but it goes beyond that. In order for Cuba to import apples or produce strawberries, the central planners would have to identify these as important needs and make sure they could purchase or produce enough to distribute to the whole population. It would not have been acceptable to only sell them to those who could afford them for a price that would justify their expense in procuring them. In addition, acquiring a significant variety of fruits would add a lot of work and greatly complicate the central planning effort. Instead, they would just invest the money on importing basic staples like rice and chicken and growing more local potatoes and yams, so that's all the people would ever see in the government stores, sold at subsidized prices and rationed, and the people never got to experience any little luxuries like apples.

It's one of the many unintended minor tragedies of Communism.

You seem to be a native English speaker, and that implies you probably earn more than I do. (Trust me on this.) Do you want to buy my rocking chair, car or flat? While these are all possible options, that does not mean it is the best use of your limited funds.

Do you have reason to believe that East Germans desperately needed bananas?

P.s. Even the pricing is a bit off, as you are competing with other foreigners for these export goods, not the natives.

Not the answer you're looking for? Browse other questions tagged gdp wealth or ask your own question.

5
Normalizing comparisons of corporations and countries
0
How can two countries of roughly the same size, population and GDP have such big differences in minimum wage?
0
Measuring asymmetry between countries GDP per capita
1
Public debt and GDP in post-socialistic countries
0
What's the difference between equity capital and market capitalization?
2
Is this a valid or legitimate way of comparing countries on traits and characteristics?
1
How is GDP counted between different countries?
2
Why do the GDP baskets of different countries have different percentages?