What does Adam Smith mean when he says wages are determined by: "advancing, stationary, or declining state of the society."

I'm reading the Wealth of Nations. Smith explains in Book One that wages for labor are determined not by how wealthy a nation is but rather by its rate of growth. At the end of chapter seven he introduces the topic with this:

First, I shall endeavour to explain what are the circumstances which naturally determine the rate of wages, and in what manner those circumstances are affected by the riches or poverty, by the advancing, stationary, or declining state of the society.

In chapter 8 he goes into detail on this. Introducing an extensive section of examples of advancing, stagnating, and declining societies and the relative hight, mediocrity, and poverty of wages (respectively), he says:

His picture of the stagnating society looks grim enough, with the average laborer having barely enough to feed his family:

If by digging the ground a whole day he can get what will purchase a small quantity of rice in the evening, he is contented. The condition of artificers is, if possible, still worse. Instead of waiting indolently in their work-houses for the calls of their customers, as in Europe, they are continually running about the streets with the tools of their respective trades, offering their services, and, as it were, begging employment.

His picture of a declining society is hard for a sympathetic person to read:

The lowest class being not only overstocked with its own workmen, but with the overflowings of all the other classes, the competition for employment would be so great in it, as to reduce the wages of labour to the most miserable and scanty subsistence of the labourer. Many would not be able to find employment even upon these hard terms, but would either starve, or be driven to seek a subsistence, either by begging, or by the perpetration perhaps, of the greatest enormities. Want, famine, and mortality, would immediately prevail in that class, and from thence extend themselves to all the superior classes, till the number of inhabitants in the country was reduced to what could easily be maintained by the revenue and stock which remained in it, and which had escaped either the tyranny or calamity which had destroyed the rest.

This observation was made on the basis of him comparing England which was traditionally a backwater - a poor country, with stagnant but 'rich' countries such as Qing dynasty China. But the observation itself was incorrect. At the time no published real GDP statistics existed and so Smith just thought that China is richer due to the fact that in the West China was often mystified and its wealth was exaggerated.

As the Maddison's estimates show (see graph at the bottom), at the time of publishing of the Wealth of Nations the Britain was already much richer than China. However, even at that time it was well known China was stagnant and UK was growing rapidly due to its early industrialization and so Smith conflated those.

Moreover, also in recent history we can see that Euro-area (comprised of mostly Rich developed countries) in last decade experienced very slow growth - that although technically not stagnation comes close to it - has higher real wages than China which experiences rapid growth (between 2011 and 2019 it was always higher than $6\%$), yet real wages are higher in the Euro-zone than in China.

However, wages tend to raise with economic growth. In fact from macroeconomic perspective there is no meaningful distinction between output and income. Moreover, until very recently average wages tracked productivity very closely and even though in US it is no longer true that they do in many places they still continue to do so. Over long periods of time eventually the output and wages will be higher in countries which are 'thriving' in sense they experience economic growth. This can be shown in the same estimates from the Maddison which shows that although all of the countries in the graph were roughly equally poor in 1500, the countries that experienced high economic growth, are the ones that now have relatively high average wages and standards of living.

So to sum up Adam Smith was not wrong in observing that wages tend to be higher in the 'most thriving' countries, but he was not correct when he said the wealth of the country - at least understood as the output of the country or GDP is not accompanied with high wages.

Of course, converse applies as well. A country which experiences negative economic growth will see its real wages and standards of living falling, and stagnant countries will experience stagnation also with respect to real wages. 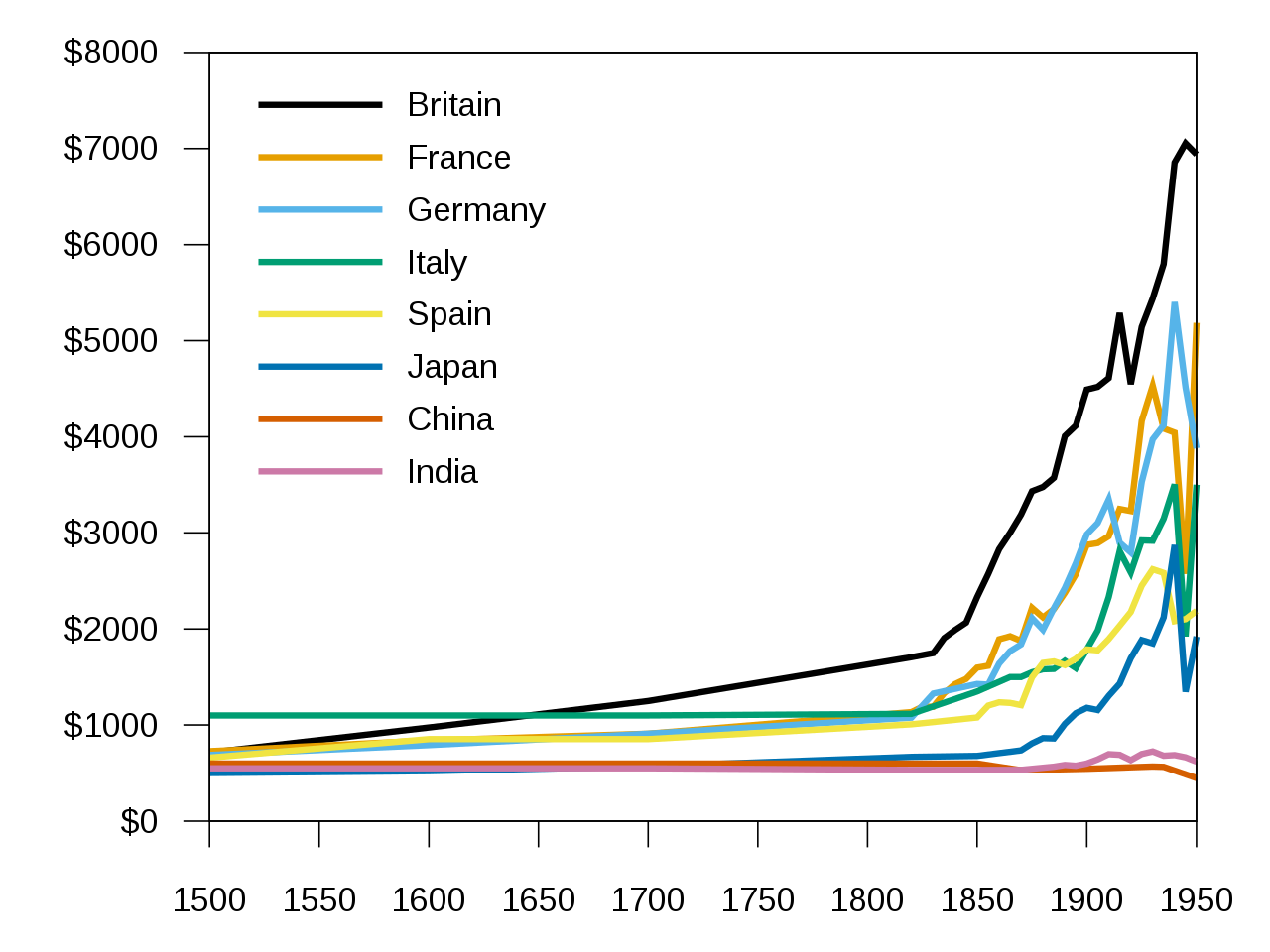 Not the answer you're looking for? Browse other questions tagged wages adam-smith or ask your own question.

1
Where did Adam Smith write the following and in what context?
2
What does Adam Smith mean by equality of condition?
1
What does Smith mean by "price of work" in this context?
1
Why does the prohibition of importing foreign goods mean that the industry should not exceed what it can maintain?