Has it truly been established that the restaurant industry operates on thin margins?

For as long as I can remember I've constantly seen the truism that restaurants operate on "razor sharp margins" repeated endlessly by the media, the restaurant industry, and the average joe. This seems to be something that people take for granted, yet there are and have been so many restaurants, many extraordinarily profitable and consistently so, and so little data ever presented to back up this truism when it is bandied about.

I've never seen any restauranteurs being open with their margins or disclosing how much they are losing or profiting from the business and the reasons for said profit/loss in a validatable & analytical way. Yet I always see this truism used to justify everything from paying employes $2 an hour and offloading their wages to the consumer, to exorbitant meal prices, and frankly its usage in making complaining about literally anything in the restaurant business seem legitimate. But when pressed, nobody ever backs it up with actual data. Does this data even exist or has this been an extremely effective guerrilla marketing ploy?

Why should I accept that the industry operates on thin margins? Why are they famously so much thinner than any other industry (or more loudly thin), and why is this so widely accepted as true? Has this truly been established from a data-based economic standpoint and if so does that data remain relevant year after year? If the answer is "yes" it has indeed been established, I ask for the how, when, where, and why--if only established once and not continually--it is relevant.

TLDR: Interesting question, but difficult to answer. The restaurant industry is made up of so many firms and many are small and self-owned. This makes collecting data difficult. The data I did collect shows restaurants operate with margins that are tight, but not as tight as commonly believed.

A potential hypothesis of the reason behind this is restaurants are often small enterprises run by a family. Those businesses may operate on healthy margins in good times but struggle excessively in bad times. Spending at restaurants is highly variable and falls dramatically during recessions. This triggers a wave of failures across smaller restaurants who do operate on tight margins and are unable to secure financing thus causing them to fail. This occurrence might be a large contributing factor to the commonly held notion that restaurants operate on extremely thin margins.

Forbes wrote a piece on restaurant margins in early 2018. The data they complied showed margins to be 6.5% for the most recent year. That is low but certainly not razor thin. However, 2018 was deep into an economic expansion that restaurants were certainly benefiting from. The numbers from earlier years is much tighter. In 2014 it was 2.3%, 2.3% again in 2015, 2.8% in 2016, and 3.3% in 2017. Those numbers paint a different picture which is much gloomier for restaurants. 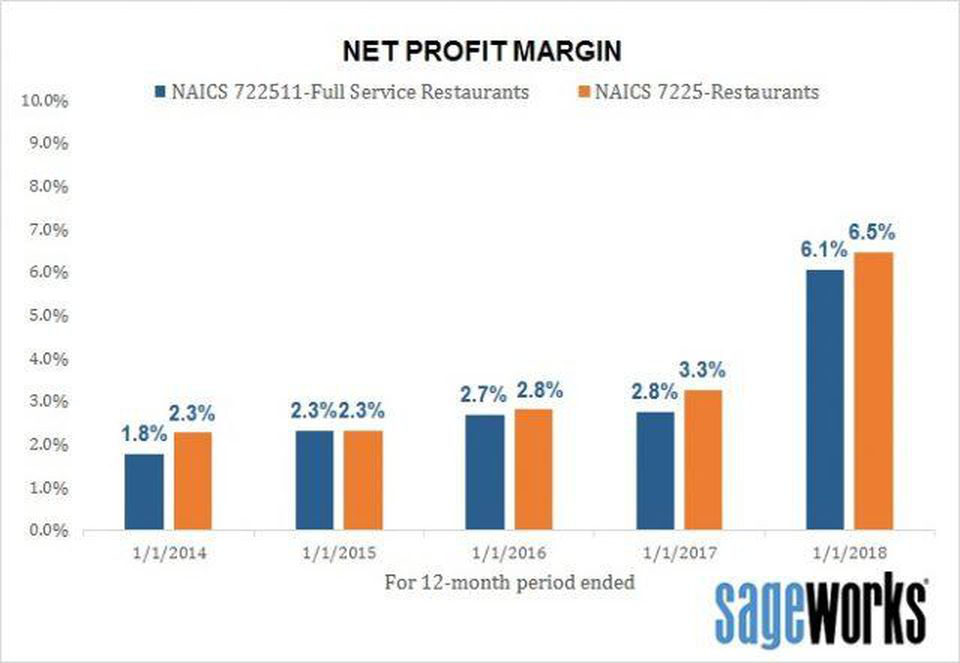 There is an interesting comparison of margins at McDonalds and high-end restaurants over on Quora.

Not the answer you're looking for? Browse other questions tagged competition profits or ask your own question.

3
Does the price level in a competitive market have to be at the intersection of the Average Cost curve and the Marginal Cost curve?
0
How has my profit margin risen?
4
What would you call a real market that is close to perfect competition?
0
Emergence of notion “primitive business” in the era of Industry 4.0 and globalization