What does the Fed mean by “smoothening money market functioning”?

In many recent interviews, Fed Chairman Jerome Powell has repeatedly mentioned that ensuring the smooth functioning of money markets is a key goal of the Fed's recent monetary policy actions. I want to know how exactly do their policy actions achieve this. Money markets are the markets that deal with short-term borrowing and lending in the economy and instruments traded in these markets include short-term treasury bills, commercial paper and mortgage- and asset-backed securities. What I interpret from what he said is that the price mechanism in these markets is not functioning optimally (i.e. some form of market failure) and that government intervention is required to restore proper market functioning. From the policy actions listed in this article, it seems that the most relevant ones would be the lowering of interest rates and the increase in asset purchases. In essence, I would like to know what problems in the money market is the chairman referring to and why the Fed's policy actions would resolve this problem.

Money markets are where financial institutions and corporates access short-term funding. One money market where the Fed has intervened directly is the overnight repo market where overnight loans ("repurchase agreements") are made in exchange for high quality collateral such as Treasuries. It is arguably the most important money market in the world, with volume---the demand of the financial system for overnight cash---up to 1 trillion USD.

The overnight repo rate is determined by supply and demand for overnight cash.

...what [potential] problems in the money market is the chairman referring to...

If the spread between overnight repo rate and the Fed's policy rate (fed funds rate) is too wide, it could be symptomatic of:

Typically, the spread is in single-digits basis points. This slightly higher rate of interest in the repo market is normally sufficient to induce (big) banks to lend out their cash reserves held at the Fed.

As mentioned by @Henry, there was a September 2019 episode where the overnight repo rate shot up to 10%, or about 800 basis points over the then-policy rate. 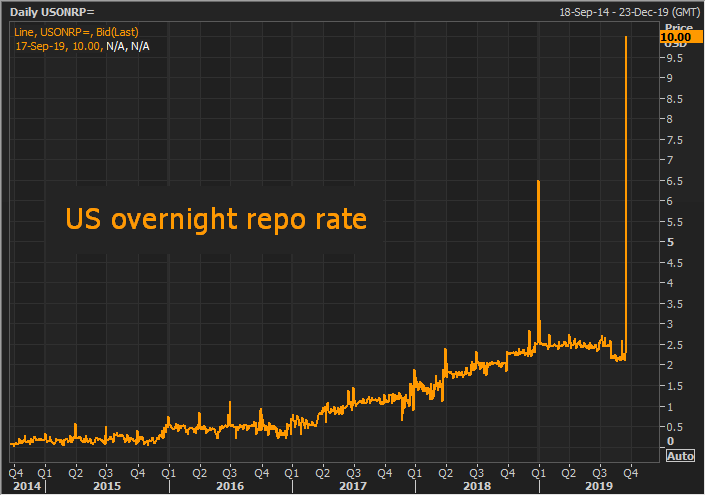 This points to severe imbalance of supply and demand for overnight cash.

...why the Fed's policy actions would resolve this problem...

After the September 2019 spike, the Fed responded by simply flooding the market with cash, increasing supply to meet funding demand. The NY Fed started making overnight loans in the repo market, later expanding into two-week loans, as well as purchasing short-dated Treasuries.

(The fact that such measures were effective indicates that the spike was a liquidity event, rather than credit event. The unwillingness of banks to lend was not due to concerns of counterparty credit-worthiness. There are several possible reasons that bank were unwilling to lend. One is that reserves held at the Fed is allocated to satisfy capital requirements, as mentioned by @Henry. There was also a concurrent unwinding of the Fed's QE balance sheet, which takes cash away from banks.)

The Fed is currently maintaining its repo facilities, By doing so, the Fed signals to the market that it is willing to step in as, to mis-use terminology somewhat, "lender of last resort".

...it seems that the most relevant ones would be the lowering of interest rates and the increase in asset purchases.

I would say those measures constitute a different aspect of monetary policy. (Whether purchasing short-dated securities is the same as QE is a different question.)

The concern is that solvent borrowers cannot issue debt at any price (interest rate) due to excessive fears of lenders within the financial system. This is commonly called a “credit crunch,” and one could do an internet search to find more background using that term.

Not the answer you're looking for? Browse other questions tagged monetary-policy federal-reserve financial-markets or ask your own question.

1
What is the logic the Fed used for paying interest on reserves?
1
Quantitative easing
1
What is it about the money market safeguards that increase volatility?
1
Monetary policy: increasing interest rate
1
How does the Greenspan/Bernanke Put semantically relate to put options?
3
How can the Fed enforce exit criteria if they begin yield curve control?
0
Why is the Fed worried about short term interest rates going negative?