What does 'Health spending as a share of GDP' mean?

I am watching a video essay talking about healthcare spending in different countries and one of the first graphs shown was titled: 'Health spending as a share of GDP'. After doing some reading, I think I understand now. It is saying the graph shows money spent on health as a percentage of GDP, but what is GDP. GDP is gross domestic product, which is the total value of goods or services produced and provided in a country in a year. So in my understanding, the phrase means: health spending as a percentage of the value of the entire nations economy. Is this correct? Also does this mean money spent on healthcare by citizens or by governments?

Healthcare spending as a percentage of GDP is the measure of spending relative to the value of entire nations output at market prices in a given year. I suppose you can call the total output the value of the economy so you could say that although note that economy is a wider concept that would normally include things omitted by GDP which can only measure transactions for which there are market prices (hence economic activity such as housework and other non-market transactions are excluded).

According to the video they take the data from OECD data. OECD has multiple series on healthcare spending. Some series include only government spending and some include also private voluntary spending.

However, the data in the video seem to closely match the total health spending % of GDP, 2013. There are some small discrepancies, for example the video says that the ratio was 11% in the Germany while the data show it was 10.9 - but more or less the data seem to match (these might have occurred due to some later corrections of the data or maybe the video is using different dataset - since they dont provide proper reference for the source its hard to know). See below: 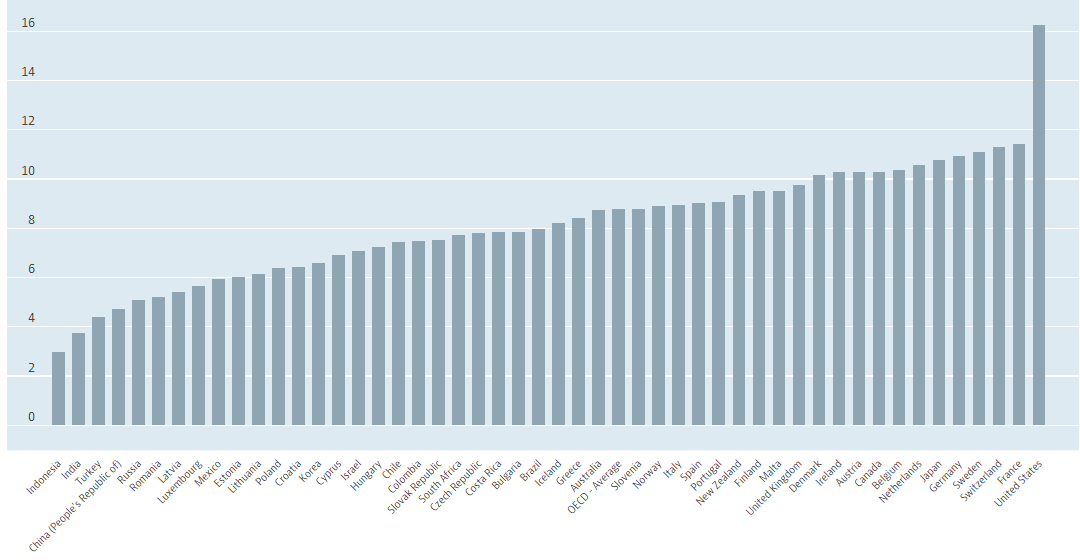 Assuming its indeed the series above, according to the OECD the measure is defined as:

Health spending measures the final consumption of health care goods and services (i.e. current health expenditure) including personal health care (curative care, rehabilitative care, long-term care, ancillary services and medical goods) and collective services (prevention and public health services as well as health administration), but excluding spending on investments. Health care is financed through a mix of financing arrangements including government spending and compulsory health insurance (“Government/compulsory”) as well as voluntary health insurance and private funds such as households’ out-of-pocket payments, NGOs and private corporations (“Voluntary”). This indicator is presented as a total and by type of financing (“Government/compulsory”, “Voluntary”, “Out-of-pocket”) and is measured as a share of GDP, as a share of total health spending and in USD per capita (using economy-wide PPPs).

So it would include both money spent by citizens as well as governments and all private organizations.

Not the answer you're looking for? Browse other questions tagged gdp political-economy health-economics or ask your own question.

1
Why do wars increase the public debts?
3
Correlation and Causality: Data comparison of educational spending and GDP growth
0
Predicting GDP contribution from market share
2
How does government spending on imported goods affect GDP?
2
What does it mean when R&D is “3% of GDP”?
0
What does poorest country by population mean?
1
What does it mean when we talk about “same basket” exactly for both GDP and CPI?
1
What does annualised GDP shrinkage of 75% and growth of 54.6% mean?
1
What is the public spending / government expenditure share of GDP in Europe?