Why GDP series always has an unit root problem?

In one of the lecture slides of class that I am currently taking our professor mentioned that when it comes to the GDP is it safe to always assume it has unit root and testing for it is just superfluous. However, why is this the case? Is that just an empirical regularity or is there some reason why GDP will always have unit root?

I suppose this could be due to the economic growth, but we did also learn about trend stationary series. I also understand that the reason why any series has unit root is that the shocks to the series never die out, but why wouldn't that hold for GDP? In our macroeconomics class we were always taught that business cycle shocks are transitory and ultimately GDP grows around its balanced growth path.

In short there is no apriori reason per se why GDP should always contain unit root, although many macroeconomists would argue it does. First, you have to make a distinction between real and nominal GDP, I will focus more on the former as common in economics.

As you correctly pointed out in a unit root series "the shocks to the series never die out". So the question whether GDP should or should not have unit root boils down to whether you can say that GDP is path dependent or not.

Traditionally in past the prevailing view in macroeconomcis was that when it comes to GDP all shocks are transitory (as you mention being taught at school), because as argued recession should not change the path of GDP. However, arguments can be made that real GDP should be path dependent. For example, recent Great Recession is often considered as an evidence for GDP being path dependent. According to Davidson, Meenagh, Minford & Wickens (2010)

The recent Great Recession is an example of the latter that is fresh in all our minds: in it the OECD economies suffered a severe drop in activity that was impossible to forecast and may also not be reversed, in the sense that output seems set to resume its previous growth rate but not recover to its previous trend level. This description has the hallmarks of non-stationarity where random changes in GDP growth lead to permanent changes in the level of GDP.

Indeed if you just casually examine the US real GDP series it seems that Great Recession lead to permanent change in the GDP level as you can see on the picture below I took from CBO: 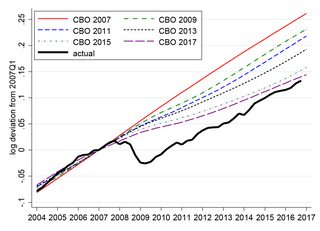 If GDP would be stationary you would expect that even after sudden shock it would eventually revert to its mean along the growing trend, but the crisis seem to have a permanent effect on GDP and this is consistent with assuming that GDP is non-stationary. However, this being said just the picture above is not an evidence enough to decisively say GDP contains unit root as it could be an example of just on-off structural break (also @Michael has nice explanation on how the views on this depend on RBC or New Keynesian point of view).

To argue that unit roots are present in GDP some serious econometric analysis is required. And actually the whole debate on whether macroeconomic aggregates have or not have unit root started with an econometric analysis of the Nelson and Plosser. In their paper they showed that actually empirically most macroeconomic aggregates including both real and nominal GNP (which are closely related to GDP - they track national product instead of domestic product) contain unit roots. This sparked a lot of follow up research on this topic.

Many papers since provide also evidence for unit roots but there are also some notable exceptions. For example, Fleissig and Strauss provide evidence that in a panel of OECD countries the GDP seems to be stationary. However, it is also worth while noting that such results do not imply that all series in the panel are stationary. Generally, I would say evidence when it comes to the GDP points towards unit roots. However, unit root testing in general has a lot of methodological issues - for example it might be incredibly difficult to distinguish between near unit root process where series is still stationary but has high autocorrelation, from genuine stationarity. Due to that this question will probably remain unsettled for some time.

Whether GDP has a unit root depends on whom you ask, and what they believe about the nature of business cycle.

The seminal paper that first applied a unit root test (the ADF test) to macroeconomic time series and extracted economic implication is Nelson-Plosser (1982). They were unable to reject the unit root null hypothesis for GDP and other standard macro series. They offered the following conclusion:

"...macroeconomic models that focus on monetary disturbances as a source of purely transitory fluctuations may never be successful in explaining a large fraction of output variation and that stochastic variation due to real factors is an essential element of any model of macroeconomic fluctuations."

These are fighting words in the debate of Real vs. New Keynesian Business Cycles. They interpret their finding as evidence against the latter. Or at least that variation in output is more attributable to permanent real shocks rather than transient shocks to aggregate demand ("monetary disturbances").

Later, however, in a subsequent milestone result Perron (1989) found that a trend-stationary series with a break in its deterministic trend may be mistaken as unit root. In particular, he overturned Nelson-Plosser's non-rejection result for GDP (and other series), after taking into account the 1929 crash and 1973 oil price shock.

Another possible example of such trend-stationary series with structural break is the CBO GDP data series covering the Great Recession shown in answer by @1muflon1.

Today, the suggestion that, say, US GDP of the last 20 years has a unit root would probably not be too controversial. In general, the answer you get depends on the data, the unit root test being applied (there are many), and whether the economist has a strong RBC or New Keynesian bias.

(For example, Nelson and Plosser were already RBC advocates before publishing their finding.)

Not the answer you're looking for? Browse other questions tagged macroeconomics gdp applied-econometrics or ask your own question.