How is the defintion of the mean preserving spread (MPS) not too general?

The mean preserving spread is defined as follows:

Consider two lotteries g and h. Let $x_g$ und $x_h$ denote the corresponding random variables. Then h is a mean preserving spread (MPS) of g, if: $x_h = x_g + z$ for some random variable z with $E[z|x_g] = 0\ \forall\ x_g$. (This definition is supposed to be complete and exhaustive and I have found it in multiple sources)

An example for an MPS is the following: 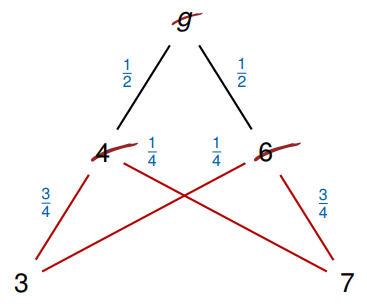 Lottery g is replaced with a new lottery (lets call it h) by adding some noise, which makes the payoffs more extreme but preserves the mean.

My problem is: As far as I understand it, g (the old lottery) is also a mean preserving spread of h (the new lottery). At least the definition from the beginning allows for this: If I set z in a manner that the first outcome becomes larger and the second one smaller, I can still have $E[z|x_g] = 0\ \forall\ x_g$, but the total risk is now smaller. I have basically spread the lottery negatively. Just that MPS is now an entirely useless concept, since it does not allow for judgements with regards to the value of utility for an individual with concave utility functions (or any other shape for that matter.

I realized my mistake whilst writing this, so I will just share the answer as well.

Not the answer you're looking for? Browse other questions tagged microeconomics utility definition decision-theory expected-utility or ask your own question.

5
Question about the Ellsberg Paradox in Expected Utility Theory
7
Why should the statistical value of life exist?
1
Change in optimal savings due to increased risk
1
How do economists model VNM-rationality violation?
1
How to check whether the production function below is neoclassical or not
6
Is there a general name for the setup in which payoffs are not known exactly but players try to influence each other's perception of the payoffs?
0
How to find change in the optimal choice with a utility function in general form?
0
Help understanding definition of expected utility function