A staple of intro economics textbooks is the circular flow diagram. Example from Frank et al. (2019, Principles of Economics)

What is the significance of the above diagram?

One thing it can illustrate is that Production = Consumption = Income. But it seems to me that this point could be stated separately without resort to some diagram such as the above.

Is there anything else the above diagram can usefully illustrate?

Thoughts: It seems to me that these circular flow diagrams are just some cutesy device that some textbook writer long ago first came up with, and which other textbook writers have simply and mindlessly stuck with.

These diagrams seem "cool" because they're analogous to similar diagrams in the natural sciences (e.g. the water cycle). But they have not anywhere near as much significance (or indeed any significance at all). Of course, I could very well be wrong--hence this question.

As you pointed out the diagram is used to illustrate that Production (or more appropriately output) = Income. In this case it equates it to consumption but that is not generally true of all circular flow diagrams. However, besides that it has many other uses as well as it is an easy way of provide a bird’s eye view of all important flows in the economy.

Also you cant judge a tool only based on its most simplified version. A more involved versions of circular flow diagram as for example the one taken from Krugman's macro textbook that you can find below the text also include financial markets (where people can save), government, international sector and so on.

The point of these is to provide birds eye view of the economy, to show students that in economics everything is interconnected (and you would be amazed by how many people do not realize that), and also it also highlights the specific interactions that occur between different sectors of an economy. The circular flow also is a good and easy way how to introduce 101 econ students to the idea that in macroeconomics income is endogenous, I seen it also be used as illustration of how money multiplier works.

Thoughts: It seems to me that these circular flow diagrams are just some cutesy device that some textbook writer long ago first came up with, and which other textbook writers have simply and mindlessly stuck with.

In a sense yes (except for the mindless part) because circular flow is just a didactic tool - you compare it to a water cycle and thats actually a good comparison. You can also describe water cycle in terms of physical processes in a mathematical model and you can do the same with circular flow which is ultimately based on the national income identity and related macro general equilibrium models but that might be too intimidating for highschool/undergraduate 101 students. The tool does not get included in textbook because professors mindlessly copy it but because its genuinely useful classroom device.

Arguably the circular flow does not have much use outside classroom or self-study, but that does not mean that it is not a useful or significant tool as it helps students who's math skills might not be yet ready for mathematical presentation understand important concepts in macroeconomics. In most fields you will find that there are tools that outside classroom have no much use yet I would argue thats enough significance in itself. I would also not say it has any less significance than water cycle which is again mostly just teaching/visualization tool. You can compare it to other tools, for example when I was studying math and we were covering topology our professor would bring us examples of Klein bottle, 3D printed tesseract and other 'cutsy toys' - ultimately they were literary just cool looking paperweights but I found them useful when learning topology and I am sure other students did as well. The circular flow just serves similar purposes and makes teaching as well as learning easier. 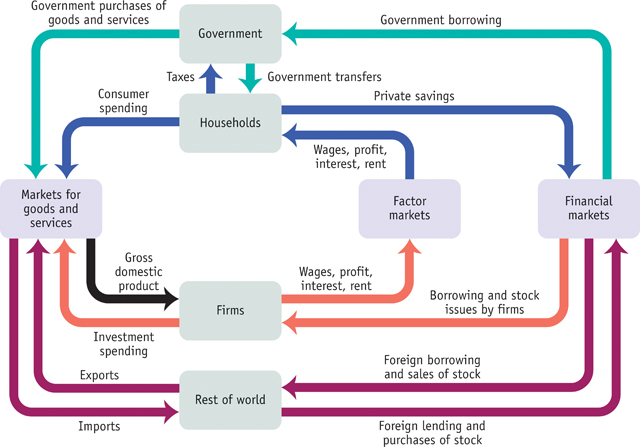 My field of interest is the government bond markets. Based on a couple of decades of experience, I would argue that it is safe to say that people do not intuitively grasp the circular flow of income in the economy. Instead, they ask where the money to buy government bonds will come from?

This understanding could be picked up by looking at systems of equations, but it appears most people do not want to do that, or cannot develop an intuition for the concept. Circular flow diagrams are a way to develop that intuition.

I cannot vouch as to how effective they are as a teaching tool, but some tool is needed.

This diagram actually communicates simply what economists do when thinking about General Equilibrium Theory. Though The image dosen't embody all details of whats going on the picture is captured.

I think its a great teaching tool, then again I am yet to teach introductory microeconomics and macroeconomics.