Which countries have the comparative advantage in Ricardo's example?

I am a complete beginner here trying to learn through Khan Academy. I found some data that correspond to Ricardo's explanation of comparative advantage. According to Wikipedia "England has a comparative advantage in producing cloth due to lower opportunity cost." Yet, when I work through it I get the opposite, where am I going wrong? 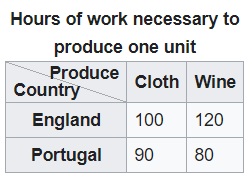 Consequently, in this case wikipedia is correct in stating that "England has a comparative advantage in producing cloth due to lower opportunity cost" given the numbers they assume. So England should produce cloth after all. You have to read problem very carefully - dont just assume that you know what the table presents.

Not the answer you're looking for? Browse other questions tagged international-trade self-study comparative-advantage or ask your own question.