How exactly does QE affect the value of the USD?

A lot of people on the Internet refer to quantitative easing (QE) as a form of "legal money printing" when it is actually not. As such, many of these folks would thus erroneously say that QE leads to devaluation of the currency as a result of the increase in the supply of physical money. This is clearly not correct as QE increases electronic credit (in the form of their reserves) in commercial banks (as banks provide treasury bills and mortgage-backed securities in exchange), which they can then lend out to borrowers who require these funds.

QE actually can increase money supply in the economy. We have different measures of money supply ranging from $M0-M4$. QE is not physical printing of banknotes so it does not expand $M0$ but it can expand wider money supply.

Following, the St. Louis Fed definition the QE is defined as:

To the extent that these securities are bought with newly created bank reserves (which you even in your question assume) they will actually increase money supply measures beside the most narrow one which only includes physical notes and coins. In addition QE is supposed to also encourage banks to lend more which also further expands money supply.

In fact increase in the money supply is what is supposed to bring interest rates down as interest rates are determined at money market as you can see on the graph below taken from Blanchard et al. Macroeconomics an European Perspective. 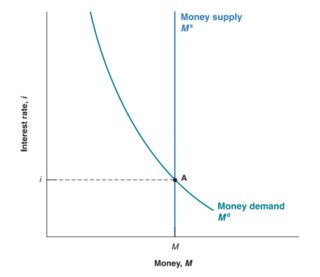 The value of currency on foreign exchange depends on both money supply and interest rate. A simple basic classroom monetary model of exchange rate can be expressed as:

Where $S$ is the exchange rate $m$ is the log of money supply, $y$ log of real output, $i$ interest rate and $f$ denotes foreign country. So QE can lead to depreciation through both its direct effect on money supply and through its effect on interest rates, however whether dollar depreciates or appreciates depends also on what the other economy, relative to which we value dollar, does.

Not the answer you're looking for? Browse other questions tagged monetary-policy currency quantitative-easing or ask your own question.

3
Why does a stronger currency have a tightening effect on economic conditions?
4
Why doesn't the government create money, spend it for free without interest, and recollect it with taxes?
2
What does the Fed mean by "smoothening money market functioning"?
1
Why doesn't QE cause the federal funds rate to continue decreasing?
0
Quantitative easing and interest rate parity
3
Are quantitative easing and helicopter cash really different tactics? And how does QE relate to Modern Monetary Theory?
3
Do open market operations permanently increase the money supply?
0
During QE what prevents the banks from selling government debt to invest in the stock market instead of lending out the money?