I understand how the concept of the mixed NE (mathematically) works. But I don’t understand how we can expect players to behave in a way that would arrive at such an equilibrium. Consider the following example in which the four axioms of expected utility are met: Two players play a coordination game of the following form: 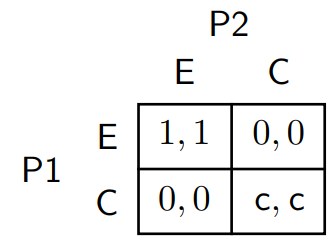 (I believe the game is commonly called “meeting in New York”) This game has a NE in mixed strategies, in which both players play E with a probability of $\frac{c}{1+c}$. This means that the higher the potential payoff of playing C is the lower the likelihood that a player will elect to go with this strategy. We arrive at this paradox, because a player always mixes in a way that makes her opponents indifferent.

But in my opinion, this is not how I would expect a rational, utility maximizing player to behave. In this example, a truly rational player (how knows that her opponents are also rational) should become more and more likely to play C the higher c is.

I have seen various examples of the mixed NE being useful in for example Binmore, but I don't understand why this concept is seen as generally useful? Could somebody help me out?

There is a series of papers that address precisely this question. The most famous ones are probably Walker and Wooders (2001) and Chiappori, Levitt, and Groseclose (2002) that deal with penalty kicks and tennis serves. Both papers conclude that the behavior of professional athletes is consistent with them playing g a mixed strategy equilibrium. A more recent working paper by Gauriot, Page, and Wooders (2016) shows that highly ranked tennis players are closer to playing optimal mixed strategies.

One caveat of those papers is that they deal with zero-sum games. As fas as I know, most of the empirical evidence that supports the use of Nash equilibrium over other solution concepts comes from zero-sum games.

People have also tried to justify the predictive power of Nash equilibrium using theoretical arguments. The results for games without pre-play communication are mixed. For a long time, people believed that Nash equilibrium could be deduced from the rationality of the players. It turns out that this is not the case (e.g., Brandenburger, 1992). People also hopped that behavior over time would converge to Nash equilibrium as the players acquire experience. There are some positive results for some specific settings, but not in general (see Nachbar, 2005). In many settings in which behavior converges, it converges to things that are not Nash equilibria (such as rationalizable strategies, or correlated equilibria).

The game that you describe is one of the hardest games to make accurate predictions. I personally do not see why we should expect people playing Meeting in NY to follow pure or mixed Nash equilibria (unless people talk to each other beforehand and agree where to meet).

I don't understand why this concept is seen as generally useful?

If for no other reason, Nash equilibrium and its refinements are the most important solution concept because they are by far the solution concept most commonly used, at least in the social sciences.

The reason why Nash equilibrium is used so much could be accidental. People often attribute the following quote to Roger Myerson:

If there is intelligent life on other planets, in a majority of them, they would have discovered correlated equilibrium before Nash equilibrium.

It is difficult to justify the concept of Nash equilibrium as "the best" solution concept for general games without communication.

No one would predict players to play the mixed NE in this game. In general, any sensible prediction of the choices of rational and experienced players must be a NE, but not the other way round. In this game the mixed NE is unstable under every payoff monotonic learning dynamics. In my opinion the more interesting question is why it is so hard to rule out the payoff-inferior pure NE.

Not the answer you're looking for? Browse other questions tagged microeconomics game-theory nash-equilibrium decision-theory or ask your own question.