Why would China's FX reserves stay flat as the Fed ramps up its balance sheet?

As seen in the chart, China's FX reserves have remained flat lately despite the massive balance sheet expansion of the Fed. Though out of the temporal domain of this chart, if it were extended back to 2008 we would see the ensuing years saw a large increase in China's FX reserves. 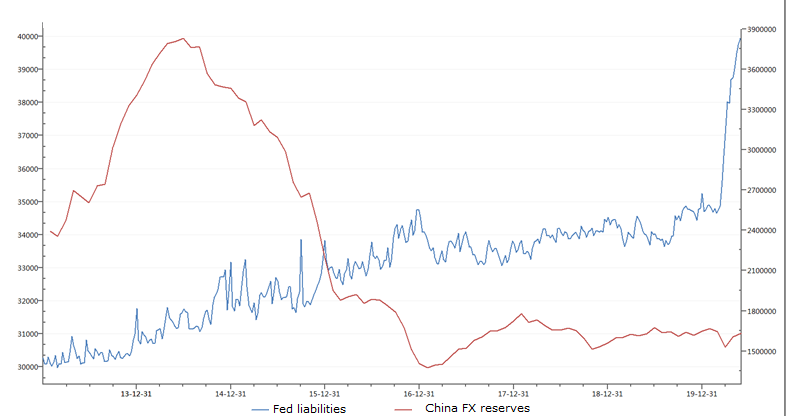 I can think of a few possible explanations ranging from political tension to dollar liquidity needs, but I don't think I can take my explanations beyond conjecture.

What is a logical explanation for the recent divergence between Fed liabilities and China's FX reserves?

There is no necessary relationship. Canada is a major trading partner of the United States, and the Fed can increase its balance sheet without Canada increasing its official reserve holdings. Why should China be different?

Not the answer you're looking for? Browse other questions tagged macroeconomics monetary-policy currency or ask your own question.

2
What will happen to the reserves at the Fed?
3
Why would Switzerland, with its export-driven economy, worry about weakening against the dollar?
1
What is the logic the Fed used for paying interest on reserves?
2
Wouldn't reducing Fed Balance Sheet lead to Inverted Yield Curve?
0
The Fed has a $4.5 trillion balance sheet: where did they get that money?
1
Commercial bank balance sheet after Fed purchases $10 million in Treasury Bonds
0
Why does a loose Fed policy reduce the downward pressure on the currencies of emerging markets?