BMO recently conducted an analysis on US monetary policy and noted that quantitative easing has had diminishing effects on M1 growth. Daniel Krieter wrote:

QE has fed through to the real economy in a slower manner than previous QE campaigns and for each dollar the Fed's balance sheet has grown, M1 money supply has increased about 32 cents, compared to 96 cents and 74 cents in QE1 and QE2.

Here is a diagram I quickly drew up to approximate the issue in pareto terms, assuming: 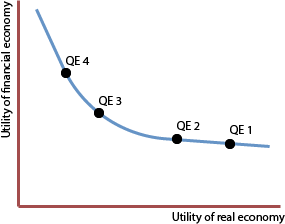 Taking the Federal Reserve at their word: "steadfast commitment to stable employment and prices," it would appear that it's policy objective is becoming harder to achieve as measured by QE's penetration into M1 (point of sale of goods/services). Clearly, there are some disruptions to the world economy recently, but I wonder if that is enough to dismiss BMO's broader point.

One explanation could be that the "diminishing returns" effect we see above is the result of reaching a saturation point. Perhaps QE can only redistribute a limited amount of future consumption to spur consumption today.

Is there anything in the literature that contradicts these findings and/or the notion that there is a limit to the amount of future consumption that can be pulled into the current period? I would consider either empirical or theoretical evidence.

Note: Answers building off of the pareto framework above are preferred, but not obligatory.