Why does an economic slowdown lead to deflation?

Usually economists say that in recession there is deflation, so increasing the money supply does not lead to a high level of inflation.

According to the Quantity theory of money, the price level is defined as such:

Which implies that if the economy slows down, the V (velocity of money in circulation) goes down as well, leading to lower price level, hence lower inflation.

But what I don't understand, that at the same time the Y (Real GDP) goes down as well, cause of the recession, which should lead to a higher price level, hence higher inflation.

First, let me address some incorrect premises in your question

Usually economists say that in recession there is deflation, so increasing the money supply does not lead to high level of inflation.

This statement is not really correct. First, I dont know many economists who would say that usually recessions are deflationary. For example, according to Romer's Advanced Macroeconomics 4th ed, the macroeconomic aggregates in 11 recessions between 1947:1 and 2009:3 can be summarized as follows: 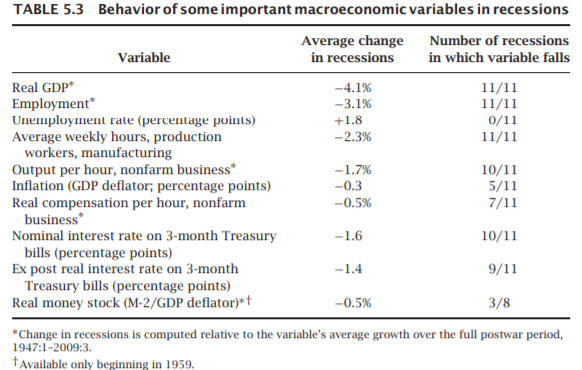 So out of 11 recessions during the time period under considerations only 5 were characterized by deflation, and average change in inflation over all 11 recessions was only $-0.3\%$ which indicates that the recessions with deflation had on average slightly higher effect than the recession with inflation, but the datapoint is so close to zero that it would most likely be statistically insignificant. So the statement you say about most economists saying recessions are deflationary is simply not factually correct. Or at least if there are economists saying that they definitely cannot be in majority and assuming that statement was correctly representing their views they would not be factually correct.

Second, the two effects are not mutually exclusive with each other. For example, it can be that velocity of money drops by $10\%$ while real output drops only by $8\%$ leading to deflation. If output would drop by more than velocity you would get inflation. Money supply also matters as it definitely does not stay constant during recession. For example, Fed with its dual mandate usually tries to expands money supply, directly or indirectly, during recessions to stimulate the economy. In addition as disused by Krugman (1998), what matters is not just the actual change in money supply or other quantities but what are peoples expectations about changes in money supply and so on. An increase of money supply that is not credible to be permanent and expected to be quickly reversed will have no effect on inflation as if it would never even happen.

One important thing to note here is that when nominal interest rates are at zero lower bound (ZLB) it is correct to say that even large monetary expansion wont necessary be inflationary. The reason for that is that if you would want to go significantly below ZLB the peoples will strictly prefer to hold cash and any increase in money supply will be completely offset by drop in velocity of money. In such cases indeed increasing money supply wont lead to higher level of inflation but that certainly does not apply to any or as data above show even most of the recessions.

Suppose the above three Assumptions hold. Then the price level $P$ must also grow at $2\%$.

Your reasoning is incorrect because the Some Reason that caused $Y$ to fall (and Assumption #1 to fail) will probably also have some effect on $V$ and $M$ (and so cause Assumptions #2 and #3 to fail).

Your error is in assuming that all else is equal (the behavior of $V$ and $M$ does not change). But that is probably false during a recession.

(This is one reason why trying to use the above simple version of the QTM to predict $P$ from mere movements in $Y$ will usually not work. Cf. Brian Romanchuk's comment above.)

In my informal, colloquial understanding, the thinking behind your assertion is that during a downturn, the populous has less money to spend, thus, less product is sold. In order to attempt to sell product, vendors reduce prices as much as they can. This is classic supply and demand, where the supply exceeds demand.

Inflation is only really measured by some people wandering around stores making notes of the prices being asked for a range of products (yeah, it's a little more complicated than that, but you get the idea). If those prices get collectively discounted enough then you have deflation. The "basket" of goods that are price checked are usually picked to be broad across the economy, yet be things that "most people buy".

The basket method of inflation/deflation measurement means that for deflation to become truly likely, then the downturn needs to affect pretty much all sectors of the economy - and actually, analysis of most downturns shows that some sectors are hit harder than others. As a result, official deflation doesn't actually happen nearly as often as the simple assertion you make would suggest - even though vast swathes of people may be close to destitution, others may be working in fairly stable circumstances.

By way of example, during Covid lockdowns, many people have found themselves without work to do (leaving some unpaid or on government support), yet others have been employed as normal, or possibly be even busier than normal. Thus, whatever longer term downturns may occur as a result of it, we may not see official deflation because some sectors of the economy are (for the time being) still working roughly normally. The fact that many people have dramatically less disposable income, and so are consuming dramatically less is somewhat hidden by a single number describing the state of the economy (ie. the inflation figure) - arguably a case of over-simplification of a complex system.

It is always easier to go back to the basics so first think of it in terms of plain old supply and demand. Most recessions are triggered by some sort of demand shock (war ends, Fed raises interest rates, pandemics). So demand contracts rapidly and supply stays roughly the same. That causes price and aggregate demand to fall. Price falling is deflation and aggregate demand falling is a recession. (Side note: notice how if it is a recession caused by a supply shock this is not true) 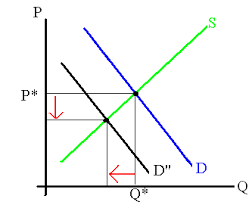 4
Could debt cause inflation instead of deflation?
3
Can holding interest rates at zero (ZIRP) for a very long time cause the deflation it is trying to prevent?
2
Does an increase in the money supply increase or decrease interest rates?
1
Fisher Effect vs Quantity Theory of Money and how an increase in the money supply lowers interest rates?
1
The fisher effect
2
What is the effect of expansionary fiscal policy in case liquidity trap situation?
2
LM curve: How interest rate is changing without OMOs by the central bank?
1
Why may printing trillions of dollars not lead to inflation?
0
Puzzled by proposed inflation mechanisms