Is the money market model based on assumption of no interest rate targeting on the part of the central bank?

This is quote from Gregory Mankiw's macroeconomics text about mechanism of formation of the interest rate in the money market model:

I also noticed that the money supply curve is strictly vertical.

I remember making myself the same question when studying those models in Mankiw's book. The answer I arrived is that from the point of view of the model, the Central Bank's policy is reflected in the money supply variable, and the interest rate variable is an abstraction that represents the main interests rates in an economy that are given by the equilibrium.

Think about this, in the model when there's an increase in money supply, what happens with the equilibrium interest rate ceteris paribus? It goes down. And the opposite is also true. But, who controls the money supply variable? The Central Bank.

So if you look at what happens in reality is somehow like that, the Central Bank cuts rates so the money supply decreases. Obviously the mechanism by which this happens in reality is different compared to the model, even they're like the 'opposite', but remember that models simplify reality in order for it to be more understandable, and in this case the CB intervention is modeled this way.

First, you have to be careful and realize that interest rate is price for money and change in prices on a market do not shift demand, demand can change as we move along demand curve but for a shift in demand the demand would have to change at all possible prices. So, ceteris paribus when central bank targets interest rate demand for money is fixed.

Now have a look at the visualization below: 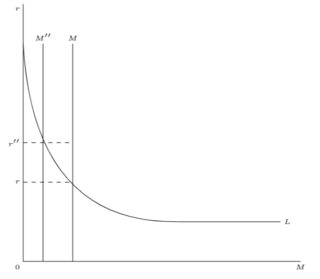 Let us suppose that we originally had equilibrium interest rate $r$ at a point where original money supply $M$ intersected money demand $L$. Next let us suppose that central bank decides to target higher interest $r''$ as it want to pursue contractionary monetary policy.

Now higher interest rate does not shift demand curve for money, it does reduce demand for money but that is movement along the demand curve not shift in demand curve. Consequently if central bank sets $r''$ but $M$ does not move there would be disequilibrium at money market and there would be excess supply of money. In order to prevent this from happening money supply has to be contracted to the point where $M$ shifts to $M''$ and equilibrium on the money market is restored. If central bank would not let money supply contract it would purposefully just distort money market which is exactly the opposite of what good central bank should do. Of course, it goes without saying that in the case it pursues expansionary monetary policy exactly the opposite will happen - even if central bank just sets low interest rate it has to follow up with increase in money supply or there would shortage of money in money market.

This works even in endogenous model of money supply where money supply is not vertical but upward sloping (since in the endogenous model even if the narrow money is fully controlled by central bank, broad money can be additionally supplied by private entities). Again, the same thing happens, if central bank increases interest rates supply for money has to shift to the left otherwise there would be surplus of money on the money market. There is simply no other way of restoring equilibrium at money market (under the strict ceteris paribus assumption of course). 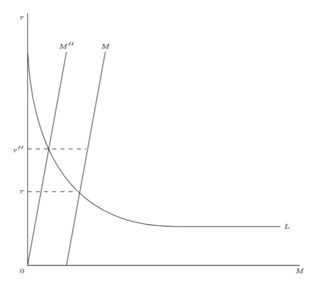 3
Money supply control vs. interest rate control
1
Elucidation needed on textbook's description of the effect of increased Interest rates on the money supply curve?
5
How can the bond market be overvalued when the value of a bond is a function of interest rates?
2
LM curve: How interest rate is changing without OMOs by the central bank?
1
Is there inverse relationship betweet prices of interest-bearing assets and the interest rate?
1
Why Increase in Money Supply Reduces Interest Rate in Money Market?