Its because resource depletion causes recession

If it's not then answer

The usual definition of recession can be simplified to be a drop in production across the economy (although various criteria are used by different bodies to determine recession dates).

Coal production is part of GDP. Hence, it is unsurprising that it falls in a recession.

In 1929 coal production peaked and then declined because all production did as pointed by @BrianRomanchuk in his +1 answer. A coal is an intermediate good that has, for most part, value only insofar as it can be used as an energy source for other production. A Great Depression has by now relatively well established origins in stock market crash that was related to radio technology. That was the original spark and as documented by Milton Friedman and Anna Schwartz in their book A Monetary History of the United States this recession was aggravated and turned into Great Depression by misguided action of the Federal Reserve which let money supply to collapse as response to recession instead of expanding it.

This is not the only reason for why Great Depression occurred but its the major accepted one. In fact it is so accepted that former chairman of Fed Ben Bernanke even officially acknowledged that the Great Depression had monetary origins.

In 2009 coal decline was inevitable. This is not due to depletion. In fact US coal reserves are so incredibly massive that according to US energy information administration:

As of January 1, 2019, the demonstrated reserve base (DRB) was estimated to contain 474 billion short tons. In the United States, coal resources are larger than remaining natural gas and oil resources, based on total British thermal units (Btu). Annually, EIA reports remaining tons of coal in the DRB, which is comprised of coal resources that have been identified to specified levels of accuracy.

Rather coals decline is inevitable as it is an industrial resource of bygone era. This is because as this brookings article explain, $90\%$ of coal production is devoted to later producing energy and in this aspect coal faces too much competition from the cheap oil, natural gas and to some extent renewable sources. In fact if coal production would not be heavily subsidized by government the industry would most likely already collapsed due to lack of demand.

The Great Recession has well established origins in a housing market boom, financial collateralization and rise of shadow banking (See Eichengreen's book Hall of Mirrors) and it had nothing to do with energy production per se. Production most likely again declined as a result of shock and fall in demand.

Furthermore, an idea that there exist any definitive link between production and resource depletion is absurd. In $1000$AD coal production was abysmal relative to the coal production in modern age. According to your logic that would imply that Middle Ages were a time of great coal depletion. Clearly the problem for our ancestor was not lack of coal but lack of demand for coal as there was no large scale use for it. As technology changes some resources become obsolete while other gain in prominence.

In fact as the statistics from Statista show that as time progresses our coal reserves increase as we find more and more sources of coal. Of course, amount of coal is not infinite but there is no indication that we will deplete all coal in our lifetime, maybe never as it is likely that coal industry will die before we even consume all coal there is on this planet. 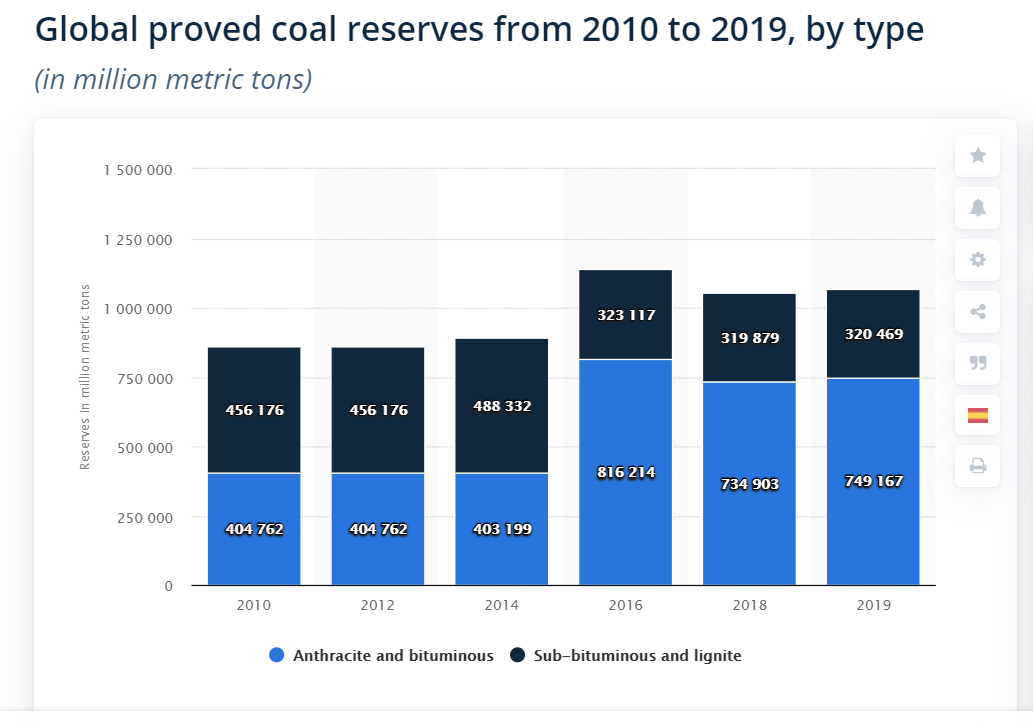 Furthermore, as the data show the 2008 recession already started in 2008Q1 while the peak coal production occurred in 2008Q4, hence with almost a year lag.

One generally cannot draw causal conclusions and inferences from graph itself but data do not show anything resembling causation going from coal production to the general output rather the data point to the exact opposite.

Furthermore, for a resource depletion to be a cause of anything it first must occur. As the above shown data and sources show both US and entire World has enough coal for decades to come. Hence, the premise itself is wrong to begin with and if you argue from incorrect premises your conclusions will most likely be incorrect as well.

3
Macroeconomics: Aggregate Demand, Equilibrium Dynamics and Expenditure Multipliers
61
Why do economists disagree so much?
8
Why is it good to create jobs?
1
Why is price dispersion from Inflation called relative price “distortion”?
2
Is my reasoning about economic growth and environmental sustainability correct?
0
Why do we say that trade and specialization according to comparative advantage lead to one-time increase in PPF of given country?
0
Why would overemployment mean that labor is used inefficiently?