Does the concept of Capitalism increase the net wealth?

I am currently going through a video by Peter Schiff from the occupy Wallstreet period where he is talking with the protestors at the time. I'm pretty early in the video and Mr. Schiff makes the following statement

"The way a capitalist gets rich is by enriching everybody else" - Schiff (4:21)

I take the above to mean that "Capitalism increases the net wealth of everyone. This is something that I have personally heard before, but never looked into. So, I tried to google the following

Does capitalism cause a net increase in wealth

What I was looking for was essentially an Econ101 level explanation of possibly the argument for and against this but the different links that appeared were:

So I ultimately want to pose the question here in two points. Firstly, did I interpret Schiff's own quote properly? Secondly, what is the basic Econ 101 explanation for the above-bolded statement?

An important thing to understand about the word "Capitalism" as used by Schiff is that he views economics from the framework of the so-called "Austrian School". They reject the validity of a lot of mainstream concepts ("rational actors", "utility functions", and basically all mathematical/statistical tools such as GDP) in favor of "praxeology". In short, they start from the axiom that at any given time, humans engage in purposeful behavior to satisfy their most important wants. With this starting point in mind, Austrian economists try to explain economic phenomena such as the emergence of trade, interest rates, money and the generation of wealth by logical deduction and by analyzing people's different preferences.

For example, Schiff would likely agree with the following description of "Capitalism":

Suppose that you, I and Schiff were stranded on a deserted island. Since "being alive" is valued very highly by all of us, we are forced to catch fish with our bare hands for sustenance. One day, you are lucky and catch enough fish to sustain you for a whole week. Instead of simply relaxing on the beach, you decide to spend the day constructing a fishing rod that will allow you to catch even more fish in the future. One might say that you have "invested" in "capital equipment" that has "grown the economy" by making it easier to satisfy an important want.

You may catch so many fish that you don't value eating the 50 most recent ones very highly compared to other things you could do with them. If Schiff happens to be good at building huts, but finds himself stuck catching very little food with his hands, it might be beneficial for the two of you to "trade". You trade 50 fish to him in exchange for the labor he expends building a hut for you. Maybe Schiff can obtain a steady supply of fish by exchanging more and more elaborate huts, comfortable furniture etc. for them. Perhaps you offer him 50 fish now so he can build a fishing rod of his own, while requiring that he gives you 60 fish at some later date. More useful equipment that enhances production is built and thus our standard of living is raised.

This process of saving up resources for investment and voluntary exchange of goods and services would be what Schiff thinks of when he says "Capitalism". We can be certain that these exchanges are viewed as beneficial for both of you; if you did not think they would be beneficial, why would you engage in them voluntarily?

Now suppose that I coercively intervene in the aforementioned process. Maybe I am alarmed by the gross wealth disparity between the owners and non-owners of fishing rods. This can happen very directly by robbery or more indirectly. For instance I might promise to "protect" Schiff from being "exploitatively" paid less than 100 fish per day in exchange for hut-building labor, meaning that he never gets hired to do this job in the first place. If I artificailly force you to direct your resources away from whatever use you think is most important, I am getting my needs met at the expense of your needs. When force is involved, one person wins while the other one loses. It also becomes more difficult for you to save up enough to invest in whatever project you deem most necessary, hampering the process of investment and wealth generation.

Schiff and Austrian economists in general believe that it is inaccurate to use the word "Capitalism" for the economic system prevalent in the West today. In their view, given that the amount of economic regulation, taxes, unionization of industries, redistribution schemes via public services, monetary expansion by central banks, government subsidies (corporate welfare), etc. has only increased since the ultra-liberal Victorian era, it is more likely "Interventionism" that is to blame. For example in the Austrian view, the 2008 financial crisis that motivated the Occupy protests shown in your clip was a direct result of Congressional involvement in issuing mortgages to people who could not afford them as well as credit expansion by the publicly chartered Federal reserve.

Here is a graph of labor productivity per hour for the United States since WWII. 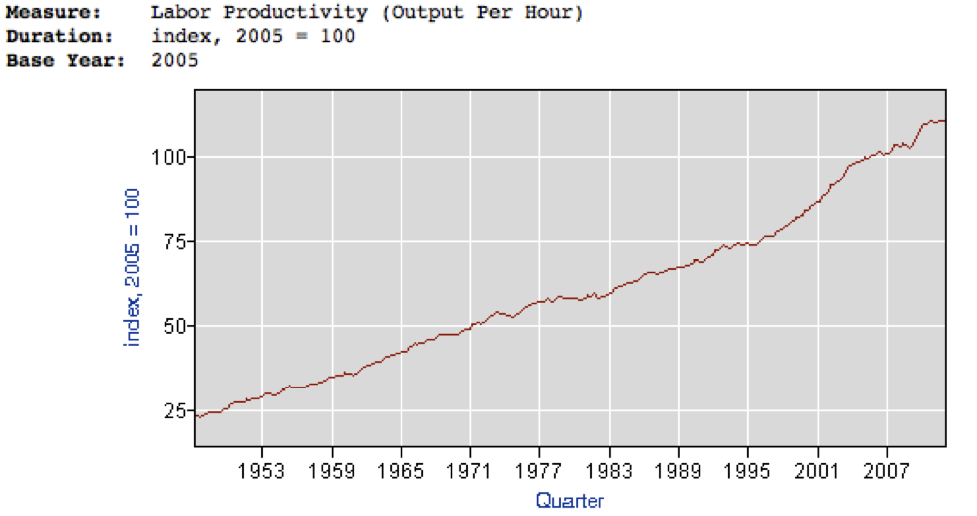 This is fairly typical of capitalist economies. Even Karl Marx and revolutionary socialists recognize that increasing labor productivity is a general characteristic of capitalism. So yes, the pie keeps getting bigger and bigger as a result of this in combination with population growth.

The question of inequality is a somewhat separate one. If the whole pie is growing big enough, the absolute size of my slice can grown even if my relative share as a percentage of the whole is getting smaller. In other words, the total wealth of society keeps increasing, and so in absolute terms, even the poorest see some benefit. In relative terms, that gets more complicated.

Not the answer you're looking for? Browse other questions tagged macroeconomics wealth capitalism or ask your own question.

2
Is worsening wealth inequality intrinsic to Capitalism?
2
Why does competition work for capitalism?
2
Wealth Creation: Where does the money come from?
5
Did capitalism exist before the 18th century?
0
Why do the gross return of wealth and wealth move in opposite direction?
0
Income/Wealth Inequality; Why does it matter?
4
How does John Stuart Mill distinguish between “wealth” and “riches”?