How are recessions even possible if its impossible for banks to lose money? [closed]

Ask Question
Asked 5 months ago
Active 5 months ago
Viewed 47 times
-2
$\begingroup$
Closed. This question is opinion-based. It is not currently accepting answers.

Therefore, is a recession only possible if there is a divide between "smart" and "dumb" banks? Is it the case that, in any recession caused by bad loans, there must always be at least one smart bank somewhere that is profiting and solvent? Since the money has to go somewhere it seems there always has to be at least one bank that is least dumb and ends up with all of the money from others. In fact, the only reason m2 would fall at all is a composition effect whereby the dumb banks are more leveraged and fail.

Recessions are defined as fall in output (usually measured as a consecutive two quarters of negative GDP growth) not loss of money. Output (GDP) might very well fall even when firms are on average more profitable and people earn more money.

For example, in the 2020Q2 the median wage in US actually increased according to U.S. Bureau of Labor Statistics, yet US experiences unprecedented $32.9\%$ GDP decline as reported by Bureau of Economic Analysis.

How can that be? Well it is because the lowest paying people are more likely to get unemployed. In the same way, most of the time you will see the least profitable firms stop producing during recessions not the most profitable ones. Hence even when output of economy declines those who remain employed and economic active might actually earn more so the idea that recession is caused by firms or banks loosing/retaining money per se is simply fundamentally wrong. Its not the loss of money, but loss of output that matters. 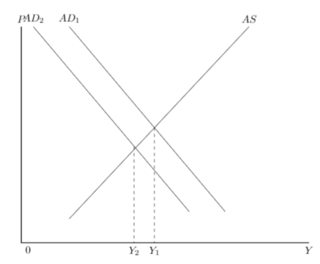 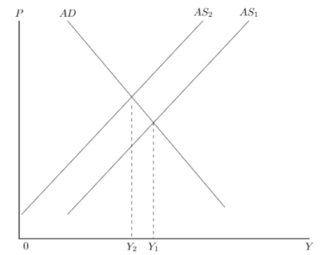 Aggregate demand changes for example in response to changing incomes, wealth, inflation expectation or interest rates and aggregate supply in response to technology shocks, changes in firm costs etc. These are just an examples, you can find more exhaustive discussion in macro textbooks for example Blanchard et al. Macroeconomics: an European Perspective is an excellent resource.

Most recessions do not even originate within the banking system. Rather banking system can be thought of as an economic highway through which macroeconomic shocks propagate to the rest of the economy. For example, it is generally accepted that Great Recession was caused by collapse of housing bubble not with banks themselves. Rather the banks played role in propagation of the recession. Furthermore, banks can also exacerbate recessions due to the role they play in money creation as fall of money supply can make recession worse while expansion of money supply can help alleviate them but exploring this is beyond scope of this answer as your question is about how recessions occur (these issues are discussed in most macroeconomic textbooks you can again have a look at the above mentioned Blanchard's textbook).

This premise is incorrect, but it depends upon what is meant by “losing money.”

The usual English usage of “lose money” is not being profitable. All that needs to happen for a bank to lose money is a customer being unable repay a loan. As happened in the Great Depression and during more recent financial crises, there can be rolling defaults in the non-bank sector, which will eventually put most banks under stress. Loan underwriting standards are never stringent enough to cover extreme contractions in nominal incomes.

However, the question seems to refer to the circular flow of bank transfers. Unless something has gone horribly wrong in the payments system, yes bank balance transfers preserve total balances. However, the size of deposits can be reduced by loan repayments, or customers withdrawing banknotes (a feature of old school bank runs). In any event, since transferring money does not generate a profit for banks (beyond transaction fees), the conservation of bank balances has no implications for the possibility of a recession.

Recessions are contractions in real economic activity. The usual mechanism is that fixed investment falls. This can often be the result of the financial sector being unable or unwilling to finance fixed investment, and/or non-financial entities changing their outlook for the future. That said, almost anything can trigger recessions, such as policy changes, or as recently seen, reaction to a pandemic.

I think the Austrian Theory of the Business Cycle (or perhaps more accurately, the "Credit Cycle") can help shed some light on how recession, banking and money can be connected.

Let's imagine a country with vast farmlands. A number of entrepreneurs open warehouses that offers 2 services. A farmer can deposit his excess grain for a small fee in case he wants it later. He gets a receipt stating how much grain he has deposited. This receipt can be traded for good and services. Other warehouses may collect it and demand that the specified amount of grain is transferred to them. Alternatively the farmer can authorize the warehouse to loan out, say, 1 ton of grain on the condition that the recipient will give 1.1 tons back at a later date.

"Fractional Reserve Banking" Now let us imagine that one of the warehouses decides to pull a clever trick. If its customers have deposited 100 tons of grain, the warehouse could secretly take 50 tons and loan them out. The warehouse collects the storage fee and whatever interest they earn on the loan. As long as there aren't too many people showing up at the same time to withdraw grain, the trick will be a success.

The problem is that the "money supply" has now increased. The farmers have claims to 100 tons of grain, while the loan recipient has a claim to 50 tons (even though in reality, only 100 tons are available - not 150!). The farmers and the recipient will start projects under the faulty assumption that 150 tons of grain are available to pay construction crews, architects etc. These projects will be to numerous or too elaborate to be completed since there simply aren't enough real resources to go around.

At some point, individuals or other warehouses, that have obtained the duplicated receipts will start to demand the real grain from the first warehouse. Since they can't all be paid, work will seize and the half-finished projects will plummet in value. Whatever businesses were started to contribute to these projects must close and sold to the highest bidder. A recession has occurred!

To answer your question, you are correct that recession should not occur in a world with a fixed money supply. However, the process described above where deposits are turned into loans is perfectly legal and an integrated part of the modern banking world. Part of the reason is the belief that expanding the money supply stimulates growth (jobs are certainly created, but whether they are actually productive/sustainable can be debated). If one adds the ability of central banks to physically or electronically issue more fiat money, it is easy to see why the idealized , but understandable assumption underlying your question is not actually valid.

I can recommend the following link for a more detailed treatment: https://mises.org/library/case-against-fed-0/html

6
Who regulates the balancing of the books for commercial banks? How? Is it public information?
3
Is money lent by central banks to private banks counted in MB or M1?
1
Why is GDP growth so important that central banks are trying to impose negative interest rate?
4
Why doesn't the government create money, spend it for free without interest, and recollect it with taxes?
2
How printed money gets to the commercial banks?
2
How important are capital requirements for controlling broad money supply?
35
Why do we need to “get the economy moving again”?