Did real incomes drop significantly since the 1950s?

From what I heard, in 1950s America, you didn't have to go to college to support a large family and a stay-at-home wife. People could buy houses easily, drove giant cars and didn't worry about gas prices. 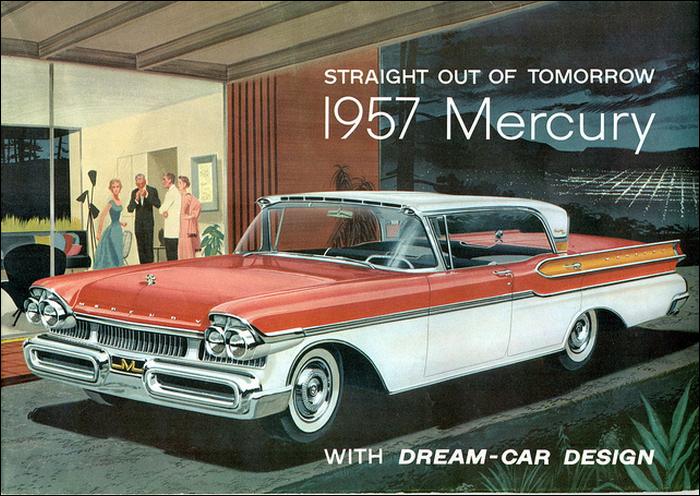 Did real incomes drop significantly since then? What was the cause?

(My college history professor had this pet theory that America gobbled up almost all the world's gold reserves during WW2, and that was what caused its post-war economic boom. Not sure if that is true, but perhaps this effect went away?)

Most of the US real earnings data which go only as far as mid 60s. According to the statista data presented in this article by world economic forum the evolution of real hourly earnings in the US for production and non-supervisory workers looked like this: 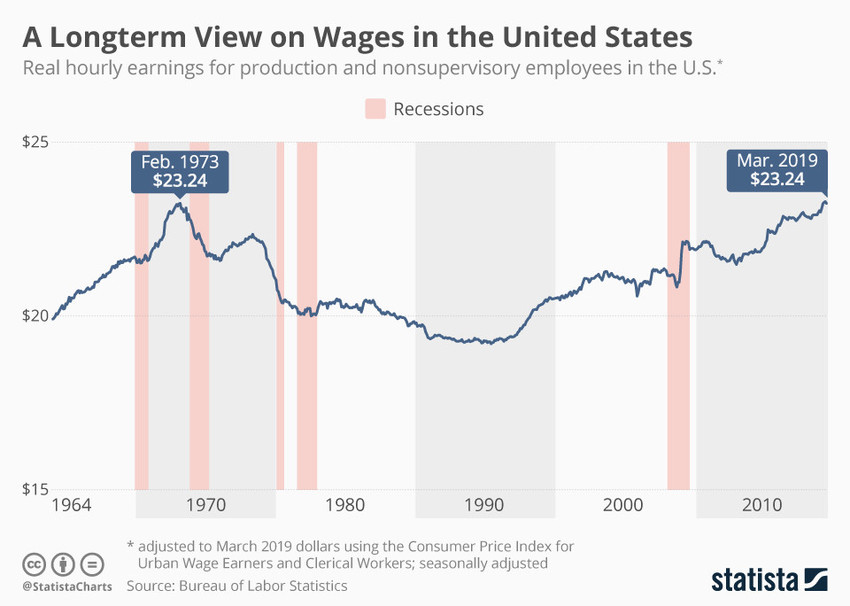 If we extrapolate to 50s then the real earnings are now higher overall. However, this being said the real wages first peaked in the 70s at $\\\$23.24$ then fallen to about $\\\$20$ and recently in 2019 they finally again reached the previous peak from the 70s. Hence, we cannot really say they dropped significantly but rather they tended to stagnate.

There is no single agreed upon explanation for this. Some authors argue this is due to technological change and decline in demand for low skill workers (see Fernandez 2001), other arguments include declining union membership (see David, Katz, and Kearney. 2006), or international competition (see here). Others argue that CPI overstates inflation and that this can be also due to increase in non-monetary benefits such as health insurance (see here). A good explainer is also provided by this brookings article.

Average standard of living is massively higher today compared to the 1950s, primarly due to technological progress.

Even a cheap low end car today is much better than the big cars of the 1950s, it is orders of magnitude safer, much more comfortable and has a whole bunch of new features that didn't exist back then.

Houses as such haven't changed that much, also afaik the average square footage of a house is much higher today. If you think about the amenities the difference is just as stark. Even an upper class household in the 1950s did not have a microwave or a dish washer and maybe had a small black and white TV which probably cost more than a month worth of wages. Anything electronic in your household either didn't exist back then or was much worse and much more expensive than it is today.

The standard of living an average single non-college educated worker can afford for his/her family today is much higher than what a similar job gave you in the 1950s.

The book “The Two Income Trap” (2003) by Elizabeth Warren (recent Democratic presidential candidate) and Amelia Warren Tyagi discussed this. They looked at spending breakdowns in the 1970s and when they were writing.

One thing to keep in mind is that the mix of spending has changed, as well as the characteristics of products. E.g., modern cars appear to be more expensive, but have longer average lives, which roughly cancels out.

The big difference in spending shares was housing. This is not very well captured in consumer price inflation measures, since the housing mix was changing. This effect can explain what you observed, which is not captured by real wage measures.

No. One can claim that growth has been disappointing or that inequality has increased. It is however absurd to claim that real incomes have dropped significantly since the 1950s. 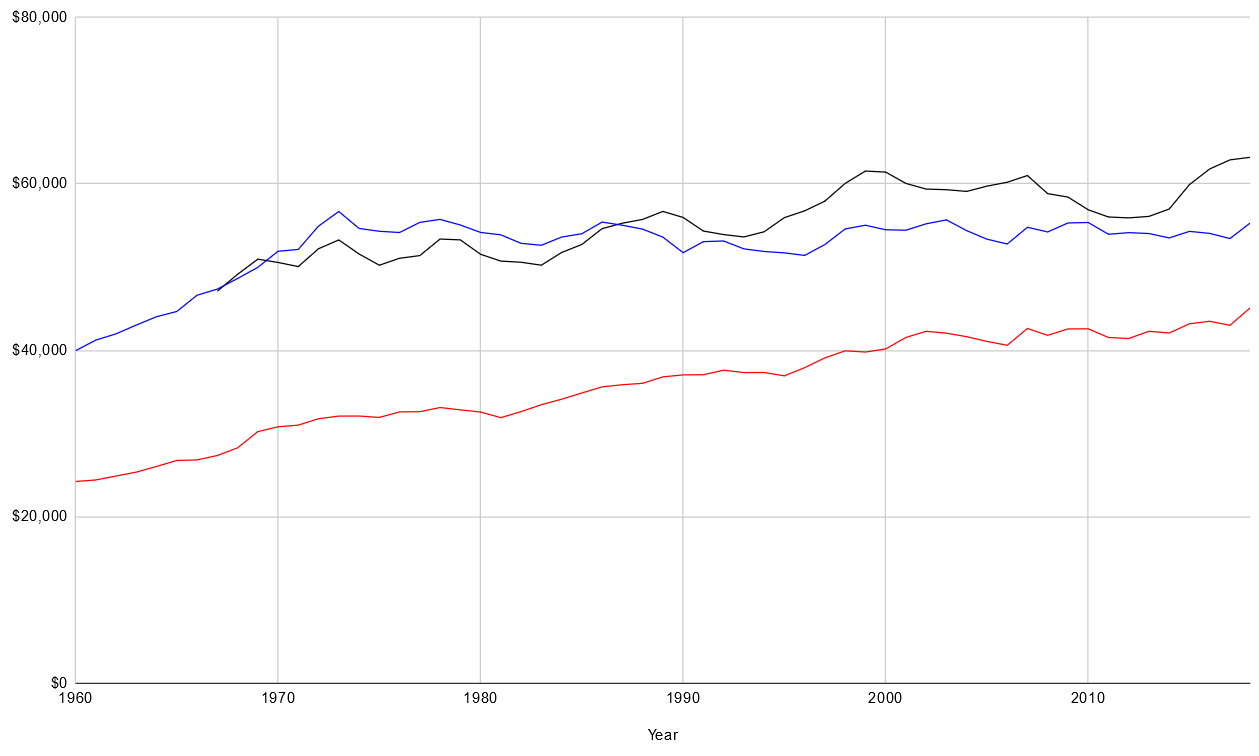 P.S. The above data and graph do not take into account an important issue: Inflation may have been consistently overstated over many decades, in which case growth in incomes over the long term will be greatly understated. See e.g.

While other answers and comments point out that the standard of living has risen, despite the inflation adjusted real incomes staying the same, I don't see anyone mentioning that this standard of living is nowadays usually achieved by a two person income instead of one.

I saw a comment that women in 1950ies still frequently(?) earned money, however, the fact that women participation in workforce has approximately doubled in almost every age group (from ~30% in 1950 to over ~65% in 1998) seems to indicate that for a lot of jobs a single earner household has over time become insufficient.

Not the answer you're looking for? Browse other questions tagged inflation nonexpert wages united-states history or ask your own question.

8
What causes the "imperialism of economics" and how did it start?
19
Why are real median household incomes stagnant?
16
Productivity vs real earnings in the US -- what happened ca 1974?
5
Has US real median personal/household income been stagnant since the late 1970's/early 1980's?
4
Empirical explanation on divergence between productivity and wages since the 70s
6
Did capitalism exist before the 18th century?
5
How could real house prices tend to rise in the long-term?
10
What are the causes of negative real interest rates?