In my textbook, the shutdown point is defined as the intersection between the average variable costs curve and the marginal costs curve. Suppose Company A has total costs function $TC(q_A)=\frac{1}{2}q_A^2 + 6q_A + 10$. Then its marginal cost is $q_A + 6$ and its average variable cost is $\frac{1}{2}q_A + 6$. Setting those equal I only get zero, does that mean there is no shutdown point? This is part of a bigger exercise where the author says to pay attention to the shutdown points so I imagine it's not zero. What gives?

The first possibility is that indeed shut down point is simply zero. The shut down point is the point at which average variable cost ($AVC$) reaches its minimum - the minimum point can be either found by calculus (by minimizing the $AVC$ function) or indeed by equating $AVC$ to marginal costs MC $AVC=MC$.

The intuition for this is that normally the average cost curve will always decline when $AVC>MC$ and starts increasing only when $AVC<MC$ because marginal cost is the cost for the last product and intuitively if the last added variable to the sample is higher than average of sample then addition of that new variable increases the whole average and vice versa. As a consequence the minimum of average cost curve will be reached when $MC=AVC$ See the example below from Mankiw principles of economics: 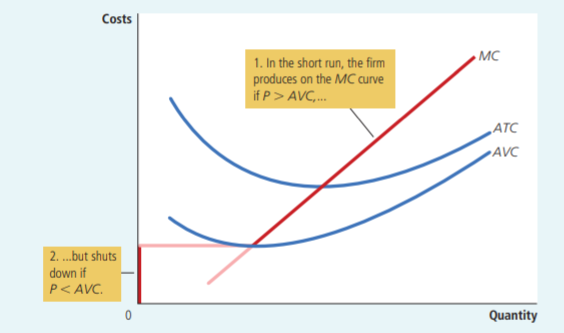 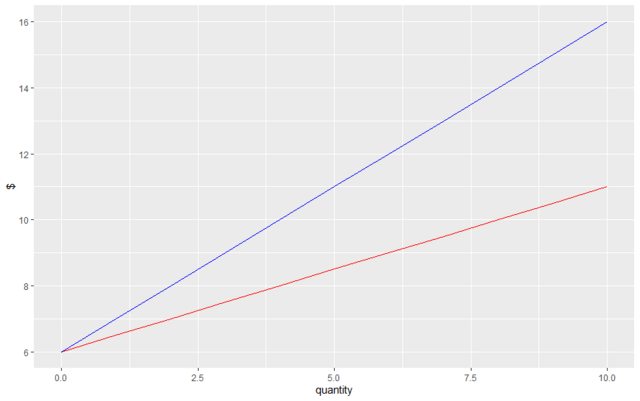 As you can see in your case the marginal cost (blue line) is always above average variable costs (red line) except for when $q=0$.

It is not uncommon for teachers to call exit from the market long-run shut down (see one example here from Texas tech university lecture notes). In the case your teacher meant exit as a long-run shut down then long run shut down point would be given at an intersection of average total cost and marginal costs (see below example from Mankiw's principles of economics). 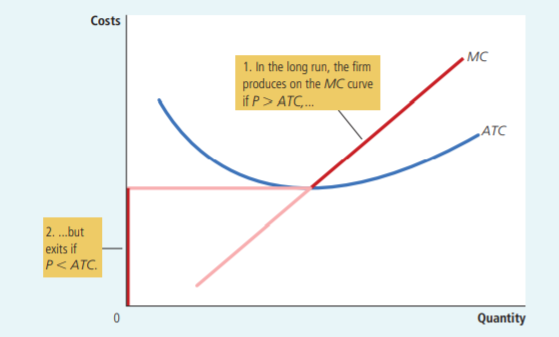 3. The above only gives you $q$ coordinate of shut down or exit point

Note that in both examples provided above for firm to actually shut down or exit the price needs to be below the minimum AVC (shut down) or ATC (exit) respectively. The shut down quantity $q_{\text{shut down}}$ only tells you the $x$ coordinate at which AVC reaches its minimum. To see how firm will actually behave you need to always check whether the price (which will be on $y$ axis) that correspond to the shut down coordinate is actually lower than either minimum point on AVC (in case of shut down) or ATC (in case of exit) as shown in the pictures from the Mankiw's textbook.

8
Why don't Burgers cost 5 cents?
1
Monopoly/Monopolistic Competition Productively Efficient or Inefficient?
0
Monopsony diagram curves
2
Supply curve when the marginal cost is zero
2
Fixed costs in the long run
1
Why are break-even and shut down points based on average cost?
3
Convenient S-shaped production function (i.e. with IRS and DRS) to derive a discontinuous demand for labor
1
Question about the Law of Supply
1
Do points inside the PPF curve always mean productive inefficiency?