In demand and supply chart, why is it assumed that import will only happen if domestic suppliers are unable to supply?

First Review What I do understand,

The demand and supply chart shows once imports are allowed... 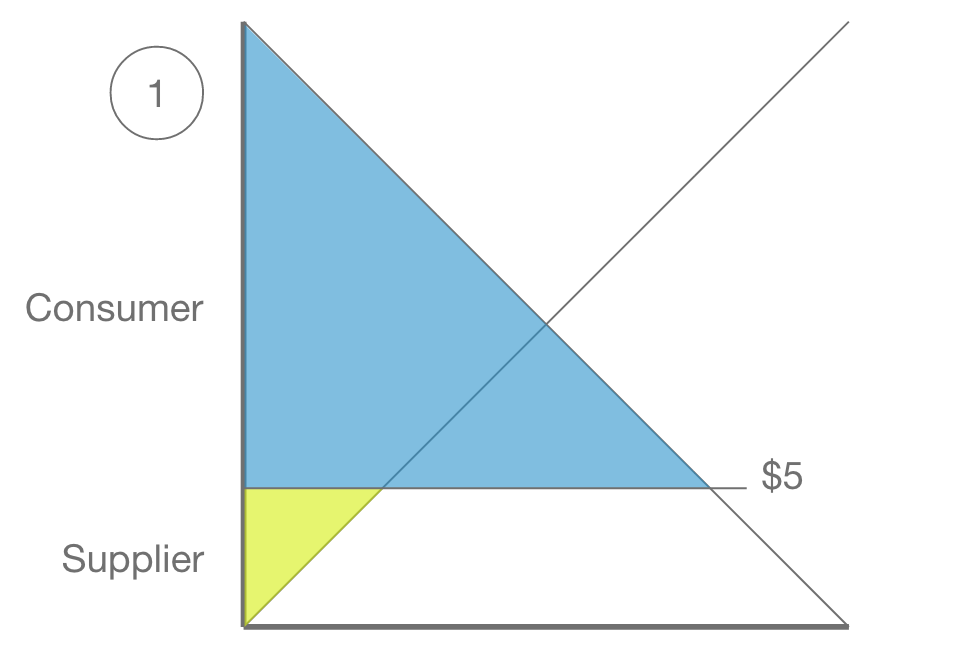 Tariff is added on imports resulting in loss of consumer surplus and increase in supplier surplus. 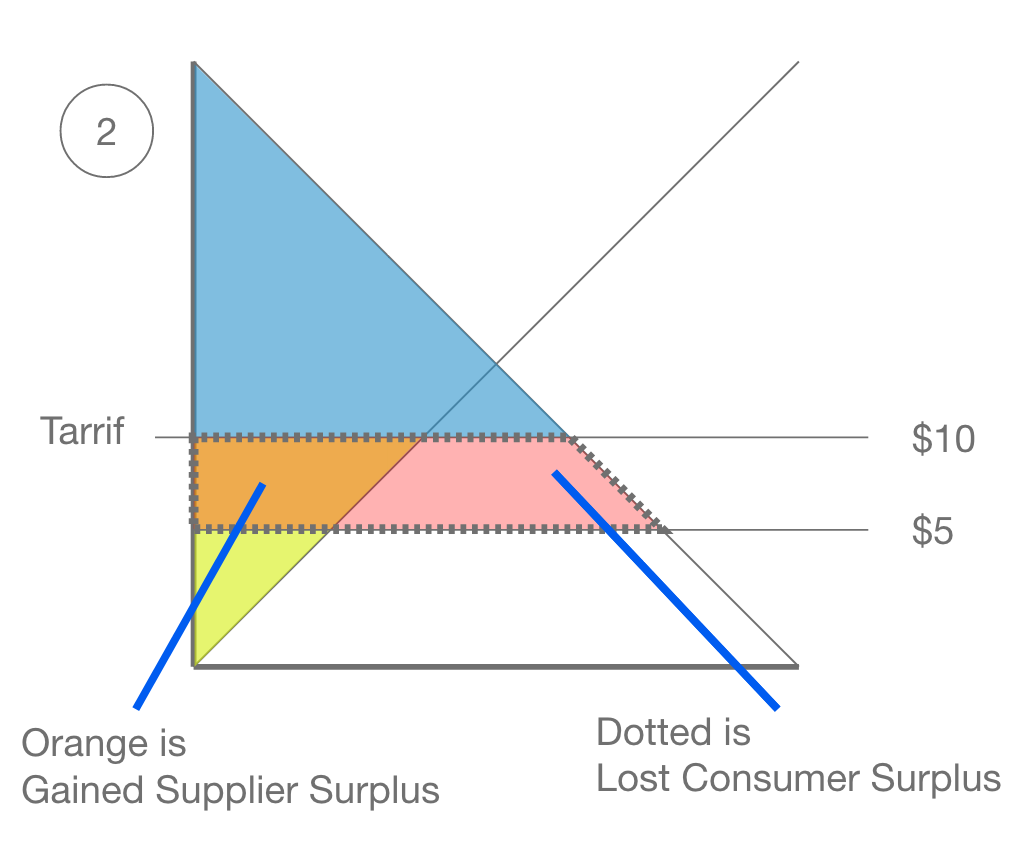 I get everything up until to this point. However... 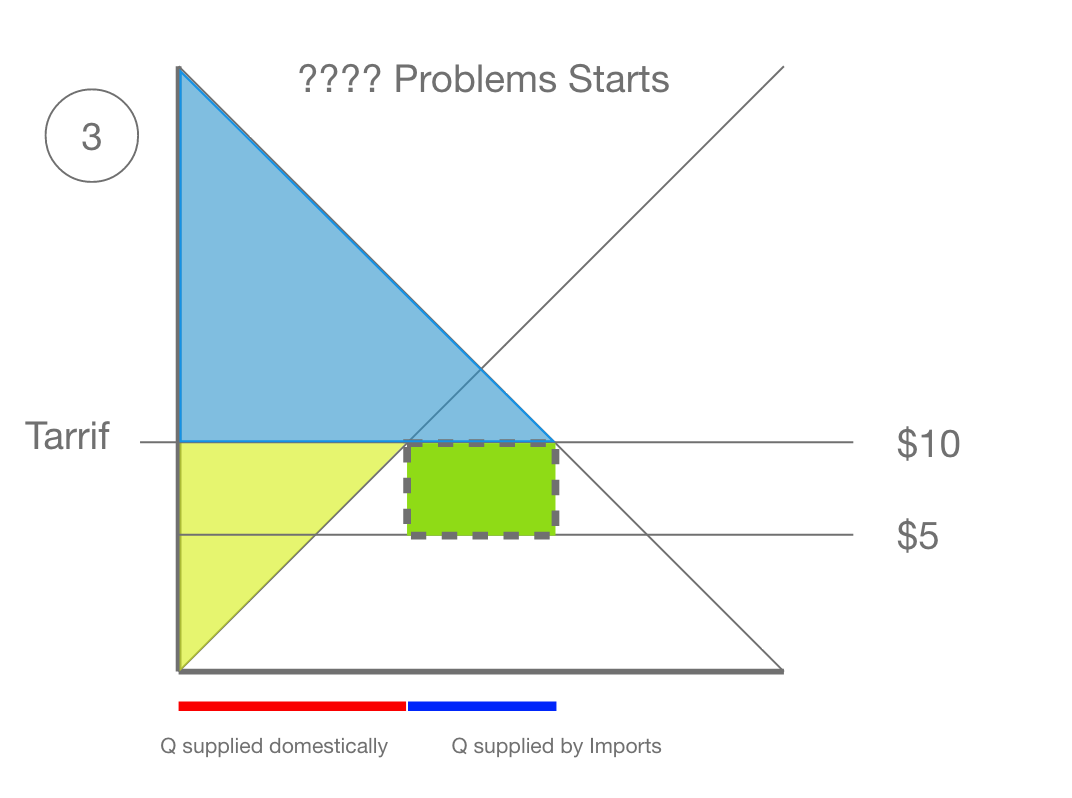 Is this wrong? But this traditional textbook version. Green represents both, width represents imported quantity and area represents govt surplus. This is not what happens in real life. If there are two products both priced $10, I'd buy either one all things being equal regardless of what company or country it was made in. For most products I'm not going to care whether they were imported or domestically made. YET, this graph very clearly assumes import will stop where local suppliers are able to provide. 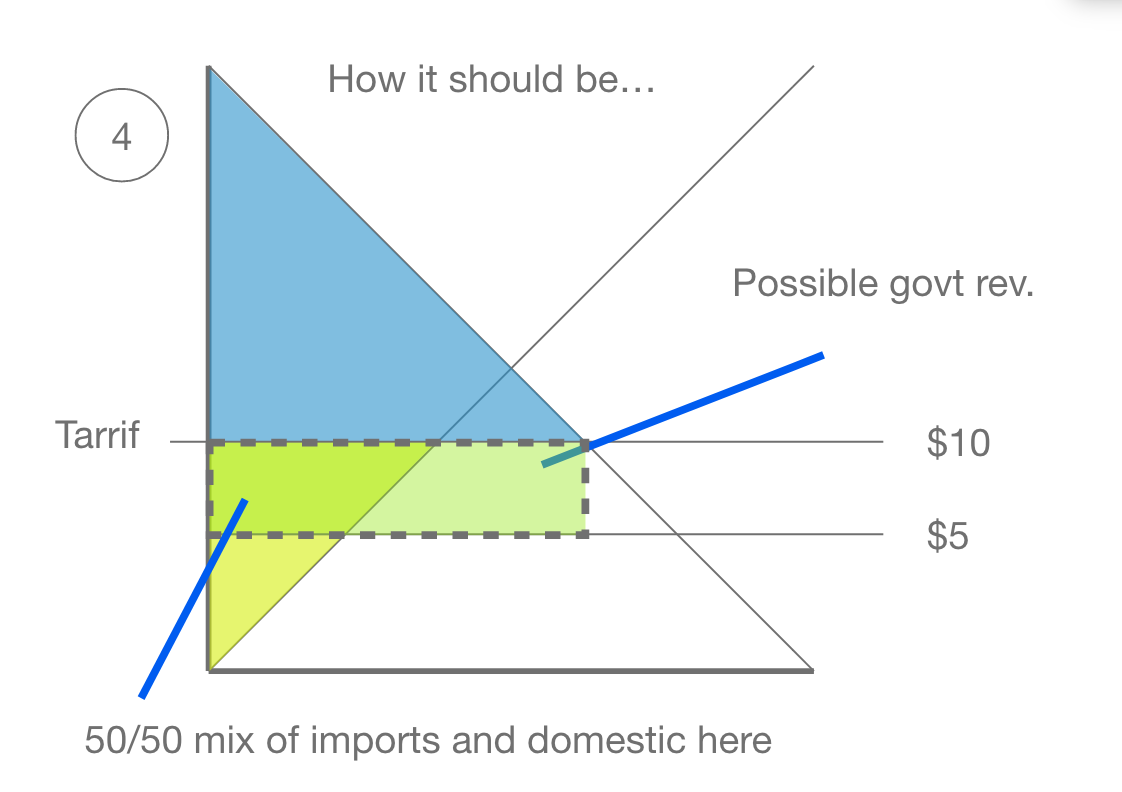 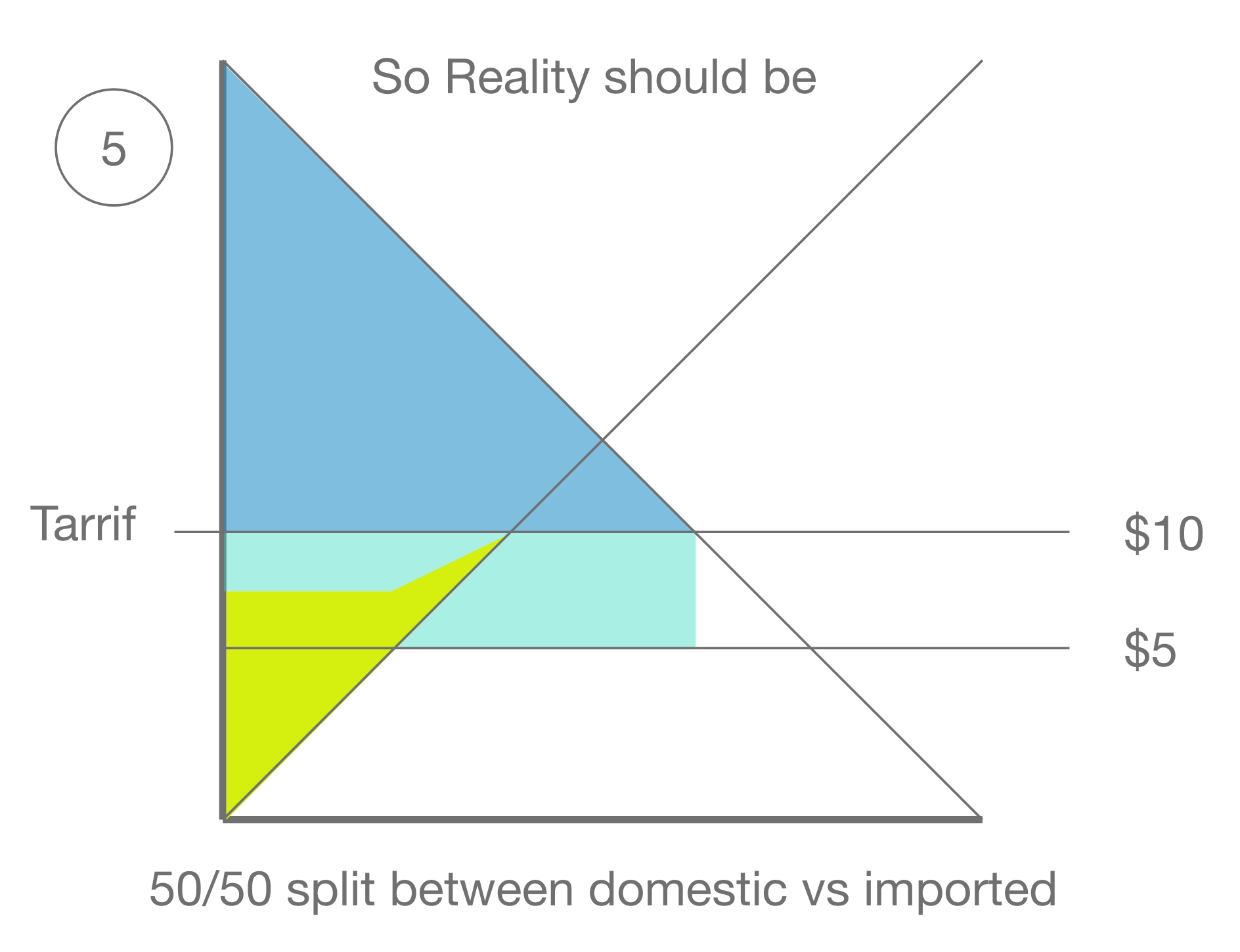 The standard supply and demand model is a model. Models by definition are distorted version of reality not reality by themselves. The model also ignores transportation costs and other real life issues as well.

However, think about the main message of the model that tariffs decrease overall welfare. Assuming that consumers randomly decide to either consume imported product or domestic product would indeed affect possible size of government tax revenue but not in any way change the main outcome that overall welfare has decreased as when you calculate area of all losses even in corner case where everything is imported taking into account higher government revenue there would still be net welfare loss. Hence adding this bit of 'realism' (I am using '' as randomly picking product is still not realistic either) would complicate math, make your exams more difficult and would not teach you much more. The point of every model is to be as simple as possible in order to be general but still complex enough to allow us to analyze the issue of interest in a way that exposes the underlying economic mechanism.

Of course, different people can disagree about where the dividing line between being too simple to be useful is - that’s an opinion based question, but it’s common for undergraduate models to be oversimplification. In undergraduate physics you will be constantly assuming perfect vacuum, massless points, zero friction etc. all of which is unrealistic in order to gain enough knowledge to understand more nuanced models. All fields use this method of ‘teaching beginners by oversimplified models’ for better or worse.

Later in your academic carrier at PhD or Master level you will encounter far more complex and also more realistic trade models. If you want to see them before you get there you can read Advanced International Trade by Feenstra or Applied International Trade by Bowen, Hollander or Viaene. Or published papers on these topics. Some of those models deal with geography, monopolistic competition and other issues that address international trade in more nuanced way than a Econ 101 could. For the sort of question you are asking here some industrial organization (IO) model with explicitly modeled competition would be more appropriate than assuming 50/50 split for example.

PS: Your last picture is actually not correct. The Government revenue, in this model, will always be a rectangle since it is by definition $Q_{import}*t$. A correct way of visualizing government revenue if you assume half of the quantity would be imported no matter what would be this: 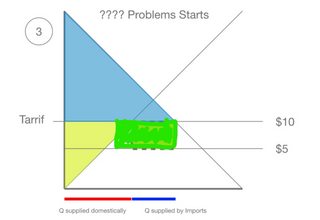 In this graph, the line going up, next to the green area, shows how many domestic suppliers are willing to produce the good for a certain price.

The line going down, next to the blue area, shows how many domestic consumers are willing to consume the good for a certain price.

The part of the domestic consumption which isn't produced domestically is imported. Because where else would those goods come from?

Also remember this graph is comparing different price levels. The "tariff" line is how much it costs to import the good, including the tariff. No imports will happen below that line, because they'd lose money.

In this model, it's assumed that the international economy is much bigger than the domestic one under consideration. Hence, importing the good does not noticeably affect the import price.

Not the answer you're looking for? Browse other questions tagged microeconomics supply-and-demand tariffs or ask your own question.

3
When Does a Shift to the Right Happen in the Demand and Supply Curves Simultaneously?
1
Are supply and demand always (with arbitrary dimensions but still) linear?
5
Why, in supply and demand curves, does price go on the y-axis?
3
What is the general rule for classifying factor that only shift one supply/demand curve or two supply/demand curve?
1
Why are the formulas for price elasticity of supply and demand the same in intro microeconomics?
0
Why unemployment quantity can be larger than the market employment based on this price ceiling supply/demand chart?
2
Supply and Demand: Why should lower costs lead to a rise in supply?
1
Why are demand and supply curves shown as concave up?
2
Why does supply (and demand) shift left and right as opposed to up and down?
1
Why does supply equal demand? Problem if large increase of price, decreases demand only by a bit