We normally assume that a lower interest rate will induce less saving as the returns on saving are lower. However, if a central bank committed itself to a low or even negative interest rate for a long period of time, could citizens come to anticipate that they will need to save more for their future/retirement as they won't be able to rely on interest payments anymore? Before 2007, when interest rates in the UK for example were often around 5%, people with a pension large enough would have been able to live off of the interest they earnt. Today, however, interest rates are closer to 0% so retirees would only be able to fund themselves by withdrawing their savings or risking their funds in investments elsewhere, something which many people either lack the knowledge to do or are too risk-averse to consider. Anticipating this, a rational person would likely save a great deal more, knowing that they'll be without any significant interest earnings during their retirement. So, could low interest rates lead to more savings in the long run?

Adair Turner briefly mentions this phenomenon in Chapter 8 of his book Between Debt and the Devil, describing how it occurred during the rapid growth periods in Japan, Korea and Taiwan where the governments followed policies of financial repression to increase loans to businesses and thus investment, with funds provided by households saving more.

tl;dr Yes it is possible, in fact it is possible even under the most basic macroeconomic consumption models (see chapter 8 in Romer's Advanced Macroeconomics textbook). This is because price change at any market (and interest rate is just price for savings) will always cause two effects. A substitution effect and income effect.

Lower interest rate creates an intertemporal substitution effect which diverts consumption from future to present causing people to save less.

The intuition mentioned above can be seen from any standard consumption model. For example, consider simple two period model with bond market. In first period consumer budget constraint is given as:

where $C_1$, $S_1$ and $Y_1$ are consumption, savings and income respectively in period 1. Saving is done by purchasing a simple bond that carriers real interest $r$. Consequently in second period we will have budget constraint given by:

The equation 3 already showcases the income effect since if we can see that if interest rate decreases the right hand side of an equation 3 $Y_1 + \frac{Y_2}{1-r} $ which is the person's lifetime wealth also becomes lower.

Next the person will try to maximize their lifetime utility $U(C_1,C_2)$ and hence we have the following problem:

Now I will skip some derivation steps but we can solve the above problem with Lagrangian where from FOCs we will be able to find that marginal rate of substitution between future and present consumption is equal to:

And hence the marginal rate of substitution depends on interest rate $r$ where higher $r$ leads us to consume more in the future. Since saving $S_1=Y_1-C_1$, lower consumption today means we save more.

Now the optimum consumption will be found at the point where marginal rate of substitution is tangent to the budget constraint. Now in this can be seen from figure 8.2 in Romer's macroeconomics posted below where

In Panel (b), $C_1$ is initially less than $Y_1$, and thus saving is positive. In this case the increase in r has a positive income effect—the individual can now afford strictly more than his or her initial bundle. The income effect acts to decrease saving, whereas the substitution effect acts to increase it. The overall effect is ambiguous; in the case shown in the figure, saving does not change.

Finally, in Panel (c) the individual is initially borrowing. In this case both the substitution and income effects reduce first-period consumption, and so saving necessarily rises. 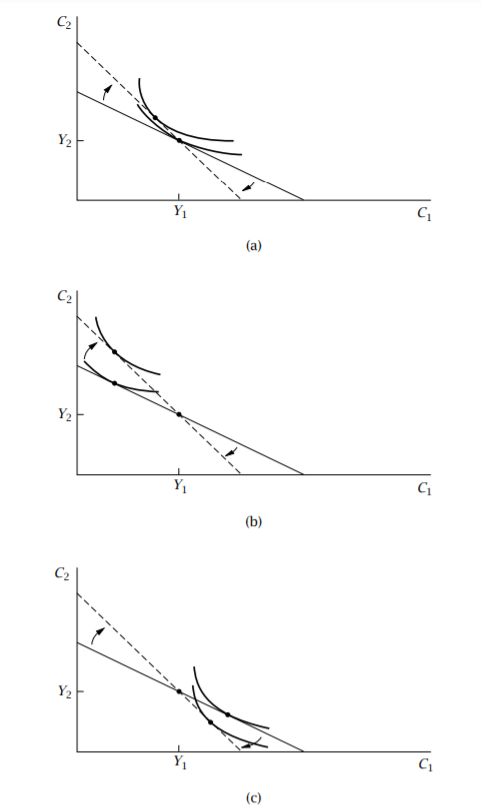 Consequently it is theoretically possible that decrease in real interest will reduce the amount of saving provided that person is a net lender in their first period and provided that income effect dominates the substitution effect. The case (b) is also the most relevant one since on net the wealth in any real life economy is positive so people must be on average savers rather than lenders, however even despite of that empirically substitution effect usually dominates the income effect on savings market. This why its very hard to find any evidence for lower interest rates leading to more savings with Japan, Korea and Taiwan perhaps being exceptions as argued in the source you provided.

Not the answer you're looking for? Browse other questions tagged microeconomics monetary-policy or ask your own question.

8
Consequences to lending and value of national currency from a negative interest rate and 140-year mortgages in Sweden
1
Monetary Policy - How can increasing interest rates cause higher inflation in the short term?
2
What stops a government in partnership with its central bank from lowering interest rates and then borrowing at this lower rate to fund investments?
2
Does an increase in the money supply increase or decrease interest rates?
4
The Fed pays 1.50% interest on reserves; so why are interest rates so low?
0
How low can interest rates go? How deeply negative?
0
Seemingly contradictory relationship between bond yields and economic growth?
0
During QE what prevents the banks from selling government debt to invest in the stock market instead of lending out the money?
0
When interest rates are high, where does the money that banks pay to depositors come from?