Were there any contemporary economists (or other observers) who considered the 1920s a "New Era" of greater growth and stability?

In the 1920s it was said that the world had entered a “New Era” of economic stability with the establishment of the Federal Reserve System and independent central banks in other countries. ...

The 1920s were known as the “New Era,” capturing the idea that the country had entered a new age not only of faster productivity growth but also of greater economic and financial stability. Shades of the “Great Moderation,” the supposed diminution of the business cycle in the lead-up to the 2008–09 crisis.

I had never heard of this "New Era" notion before. I know of Irving Fisher's infamous "permanently high plateau" quote, but I do not know of anything similar to the triumphalist "Great Moderation" messages sent out by (some) economists before 2008.

(I wonder if Eichengreen is perhaps exaggerating this in order to craft stronger parallels between the Great Depression and Great Recession.)

So, were there any contemporary economists (or other observers) who considered the 1920s a "New Era" of greater growth and stability?

There are several other economists/observers that share view that this was time of growth and relative stability. For example, according to Smiley writing for the Economic History Association

1920s are a period of vigorous, vital economic growth.

Smiley is drawing upon quite wide list of research on economic history that generally shares that view. I mean in this case you could say that data speak for themselves. As you can see from the figure produced by Smiley, shown below, based on Romer (1988) estimates of the real GNP, we can see that real national output increased significantly during the 20s (excluding Great Depression of course). 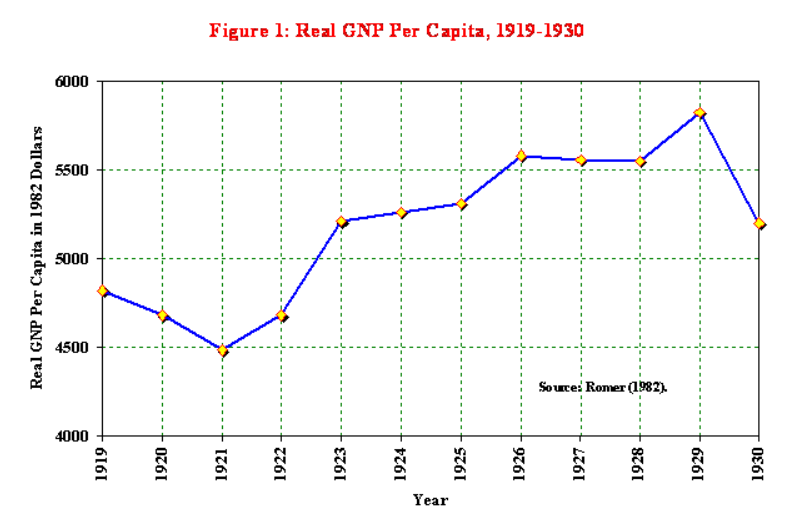 More recently, Gordon (2016) in his The Rise and Fall of American Growth considers this period to be a period of significant economic growth and prosperity/stability.

This being said, I think Eichengreen was just referring to how historians call 20's rather than how economists call them. According to The American Yawp A Massively Collaborative Open U.S. History Textbook by Sandford University Press [emphasis mine]:

The 1920s, of course, would be anything but “normal.” The decade so reshaped American life that it came to be called by many names: the New Era, the Jazz Age, the Age of the Flapper, the Prosperity Decade, and, most commonly, the Roaring Twenties.

The use of quotation marks seems to indicate that Eichengreen was just referring to the commonly used historic term for that period in American history. The way how I read the passage is that Eichengreen is saying this was 'the New Era' - a pun/reference to the historic term, and then just saying that it was a period of economic growth and stability - which is supported by data and, as mentioned above, also argued by multiple other economists/observers.

10
Was the Concorde project an example of the sunk-cost fallacy?
13
What have been the main developments in macroeconomics and financial economics since the 2008 financial crisis?
3
Is there any evidence that socialist systems are/ were constrained by capitalism and this is the main cause for its demise?