Question about the Law of Supply

I have a contention with the Law of Supply's dictum "if the price of a good falls, then the quantity supplied of that good falls, ceteris paribus."

Imagine a market for widgets produced by multiple factories with colossal machinery; the average cost differs among the factories.

If the price of the good decreases, then, according to the Law of Supply, quantity supplied decreases. The explanation I'm supposed to give in examinations goes along the lines of "the profit margin decreases, hence producers are incentivized to produce less".
Yet I would argue that, provided the drop in price is not drastic, every factory should produce the same amount as before, even those for which the price has dropped below the average cost, as this scenario would leave their owners better off compared to paying the fixed costs without revenue. Thus, the same quantity of widgets would be produced after the price drop.

The holes in my contention that are obvious to me are:

I also think that my argument is only valid in the short run: then, the marginal costs of individual firms would be more or less constant, and negligible changes in it would probably be brought about by small-scale laying off of employees. In the long run, owners could sell machinery and buildings and the marginal cost would be more variable.

So, taking account of all assumptions so far, i.e. the decrease in price is not drastic, the machinery is not good for anything other than producing widgets, and we are only considering the short run, then decreases in price should effect only slight changes in the quantity produced: this would be represented by a very inelastic supply curve. But, if interpreted as a marginal cost curve, this curve also says that for tiny nudges in the quantity produced, the marginal cost varies significantly, which is contrary to my earlier understanding that the marginal cost is approximately constant because factories cannot dump machinery easily in the short run.

What am I missing?

The law of supply holds under fairly general conditions. Essentially, it states that "quantities respond in the same direction as price changes." Formally, $$(p-p')(q-q')\geq 0,$$ where $p$ is price, $q$ is quantity and primed and unprimed reflect two different states. You see that the inequality is weak such that a constant range is not excluded. However, a decreasing supply curve would violate the law of supply.

Moreover, your argument appears to be a bit fuzzy. Sure enough, it implies that for a given price-quantity pair $(p,q)$ that $S(p) = S(p-\epsilon)=q$, when $\epsilon$ price changes are not drastic. However, then consider price-quantity pair $(p-\epsilon,q)$ and another non-drastic price drop. Your argument appears to imply $S(p-\epsilon)=S(p-2\epsilon)=q$ and so on culminating in a constant demand function, which --it seems-- you do not want to apply. It seems more reasonable to suggest that a marginal price drop also has a marginal effect on supply such that $S(p)=q$ and $S(p-\epsilon) = q - \varepsilon$, where both $\epsilon$ and $\varepsilon$ are tiny such that a "non-drastic price drop" implies a "non-drastic quantity reduction."

The law of supply is only valid for continuous and strictly monotonically increasing supply function. It does not apply to any arbitrary supply function. For example, consider trivial example of perfectly inelastic supply. 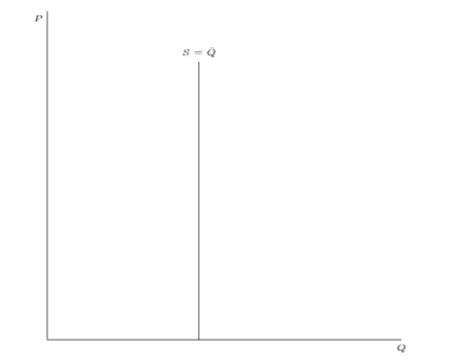 As you can clearly see with this perfectly inelastic supply no matter what the price is the supply will be some fixed quantity $\bar{Q}$. You can also derive other examples of supply functions where law of supply would be violated (e.g. backward bending supply).

There also exist 'step-like' supply curves such as: 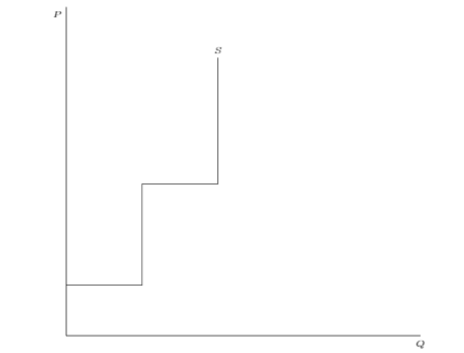 However, the reasoning you provide is not generally valid.

Not the answer you're looking for? Browse other questions tagged macroeconomics microeconomics supply-and-demand or ask your own question.

2
Effect of a good's inputs on elasticity of supply
2
The Law of Supply
1
Questions on supply curve
2
Why does marginal private cost increase with quantity?
0
Understanding the law of supply
1
Why is the law of diminishing marginal returns justified?
3
Basic question about why supply/demand should move to the equilibrium price?