Can individual consumers ever be price-makers, and can they thereby have major effects on welfare?

Suppose there's a big demand shock on some good X. As long as X has fairly standard supply and demand curves, that'll raise the price. And all of the buyers who would have bought at the lower price will be slightly harmed - they all have to pay a bit more for the good. And the producers are benefited - they make a greater profit. And the new buyers would presumably benefit from buying the good as well.

In \$ terms, this should balance out to be slightly positive. But, in welfare terms, it seems like it might not be. The buyers could all be a lot poorer than the producers, so an extra \$1 in profit might be far less valuable to the producers than it was to the buyers, so the demand shock could overall be a bad thing - it's effectively a transfer from the poor to the rich. Or it might be other way around, with producers poorer than buyers, in which case the demand shock would be a great thing - it's a transfer from the rich to the poor. Is that right?

But here's the actual question: do individual consumers ever trigger price changes like this? If I choose to go to the supermarket and buy an apple (rather than not do so), is there any probability at all that that very slight increase in the demand for apples will trigger a price rise on all apples, even for a short time? Or if I choose to buy and consume a bit more gas, which is much more divisible than apples, could I potentially raise the price of gas by $0.01, whether the price rise just happens at my local gas station or the world over?

I realise that, even if it's possible that this could happen, it'd be extremely unlikely. That's okay. I'm curious about whether I could have even a 1 in a billion chance of having this sort of effect. After all, raising the price of, say, rice or wheat by even \$0.01 across the entire world could have enormous welfare impacts. For at least some of the extreme poor, a \$0.01 price difference may mean that they go hungry for the day, or that they can't afford other essential goods, like medicine. So, is there any probability at all of individual consumers having this effect?

Answer to the Question on Welfare

The welfare analysis is not as simple as that. First, let us set aside for a second any inequality considerations (we can add them on later but there are some misconceptions about welfare analysis that have to be corrected first). 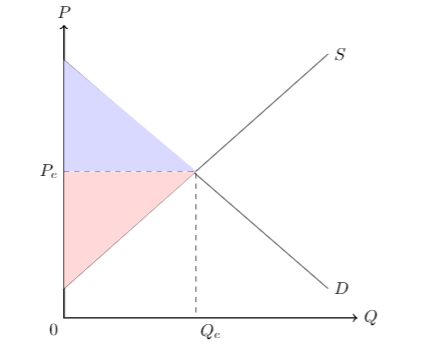 Given this the expansion of demand can very well lead to increase of not just overall welfare but consumer welfare as well, even if price increases. Consider a trivial example:

As clearly demonstrated by the simple stylized example above increase in demand even when it leads to increase in price can very well leave consumers better off even measured in just consumer welfare terms. Note the above is just example, the size of both consumer and producer surpluses crucially depend on shape of supply and demand, so in some situation consumers could be worse off. The point is that already from the start the assertions made about consumer welfare from shocks to demand are simply invalid.

Next, if we would want to start discussing inequality and similar issues then yes the above welfare analysis would change. If we would for example denote all producers poor and all consumers rich (or vice versa), assume that interpersonal welfare comparisons are possible etc., we would additionally have to scale the consumer and producer surplus accordingly to reflect that. Nonetheless, this does not necessarily change outcome of the above welfare analysis, the inequality would have to be severe enough so that scaled CS/PS would be lower in the new equilibrium.

However, the simple partial equilibrium generic supply-demand graph/model is not suited for analysis of inequality. For example, the stylized supply-demand model above does not explicitly model factor prices (e.g. wages, capital etc). The reason why supply is upward sloping is that the more producers produce the more factors they need to employ (e.g. more workers) which puts upward pressure on wages. Just because factory owner is rich that does not mean workers are so in more involved analysis we would try to model also supply demand changes on labor markets or some alternative partial equilibrium analysis that focuses specifically on people's incomes/wealth whether they are consumers or producers etc. Since this heterogeneity is not captured by simple stylized supply and demand you simply cannot do any serious welfare analysis that takes into account inequality simply from supply and demand shifts on a given goods market. You need more complex model for that (see discussion in any public economics textbook for example Stiglitz, Economics of the Public Sector, 3rd ed. is good place to start).

Answer to the Question on Individual Consumers Changing Prices

Yes individual consumer demand can change market price unless we have special situations (e.g. situation where supply is completely elastic so increase in demand wont affect equilibrium price). I mean this is on some level trivial. The demand function is nothing more than an aggregation of individual demands, hence if demand and supply function are such that increase in demand leads to change in price, then individual consumers can affect the market price.

You can of course have special situations such as 'step-like' supply because it might be simply too costly for suppliers to adjust prices just because one extra person demands one extra good (your example of shopper in general store). An exaggerated case of such situation is plotted below.

In the case as shown below the demand will affect price only if it shifts sufficiently to point where supply is elastic. The probability of some individual consumer being the proverbial 'last straw' will depend upon parameters of the model. For example, if we assume that quantity demanded must increase by $100$ to create change in price, and if we assume this increase in demand is caused by $100$ individual consumers each raising their demand exactly by 1, then the probability of any single randomly selected consumer being the one that caused the price change would be $\frac{1}{100}=1\%$. This is of course oversimplified because in reality one consumer my increase their demand by 10 another just by 1, this would make the probability calculation more complex but not impossible in principle.

This being said, I do not know of any research that would try to calculate the above. Normally when it comes to demand researchers do not have data on individual demand of every single customer. Even the demand curve has to be estimated as only equilibrium demand can be observed, but this is doable and can be done with reasonable precision. So I would be surprised if there would be some situation where there is enough data to realistically calculate this. However, we know that demand as a whole affects prices - there is whole literature on estimation of supply-demand systems (see MacKay & Miller; 2019 for review and sources cited therein for particular examples) which shows that changes in demand change the prices and since demand is just an aggregation of individual demands individuals have an effect on this. Since demand curve can shift only when individual demands shifts there will always be someone on the margin responsible for triggering price change. 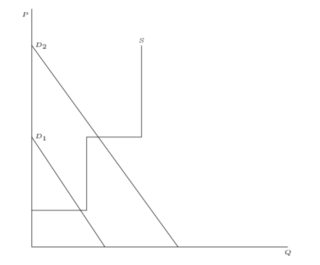 Not the answer you're looking for? Browse other questions tagged microeconomics supply-and-demand international-trade demand consumer-surplus or ask your own question.

2
Why does marginal private cost increase with quantity?
2
What's the term for elastic pricing?
7
Can a monopoly INCREASE the market surplus compared with a competitive market?
3
Basic question about why supply/demand should move to the equilibrium price?
2
International emissions trading
6
Does consumer surplus over-weigh the interests of high-income consumers?
0
Increase in the price of skateboard wheels cause a decrease/no change in the demand of skateboards? (2 separate markets w/ 2 separate buyers)
1
Examples of bounded, positive, inverse demand curves