Why does a rise in the savings rate result in an increase in the capital stock intuitively?

I understand mathematically how it works. But what is the actual process intuitively.

The story in the other answer is not fundamentally wrong but incomplete and bit inaccurate.

Saving does actually affect capital stock through investment in Solow model (assuming based on the Solow tag that is the model you want intuition for), but there is more complexity to it.

Investment is actually equal not just to private saving but both private and public saving since saving is actually defined as (following Blanchard et al Macroeconomics: a European Perspective pp 51):

Combining this definition with output identity for closed economy $Y\equiv C+I+G$ gives us:

However, it is often convenient in Solow model to just ignore government by assuming $G=T$, in which case $S+I$.

Next the way how savings rate affects capital accumulation is depicted in the picture I took from Romer Advanced Macroeconomics 4th ed pp 19. 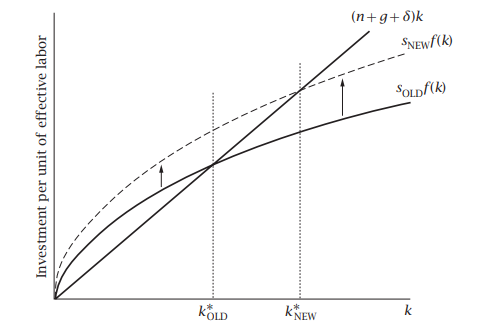 This is why the evolution of capital accumulation (per unit of effective worker) is given by:

where actually $sf(k(t)) = sY = S =I$, so it is through increased investment. The $n$ and $g$ would be population and technological growth respectively and $\delta$ the rate of depreciation (although these are not important for intuition about raising level of capital).

Does this push capital beyond steady state?

Now this is surprisingly common misconception. Increase in savings rate can increase the level of capital stock - it just cannot increase the growth rate at which new capital per effective worker accumulates.

According to Romer Advanced Macroeconomics [emphasis mine]:

However, this is quite common misconception because of the confusing terminology. Increase in level in macroeconomic. Consider for example the visualization from Romer Advanced Macroeconomics pp 20: 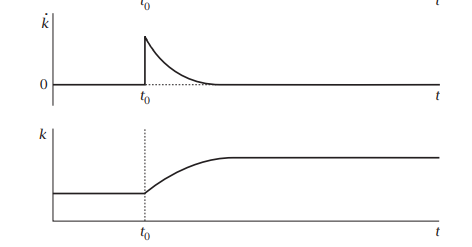 The upper graph shows you the growth rate of capital per effective worker. Indeed here savings rate has only one-of impact that quickly dies out (in fact this is just level increase in disguise as growth).

However, on the bottom panel you can clearly see that the level of capital per effective worker is now higher thanks to higher savings rate.

Savings in macro are equal to investment $(S=I)$. Investment is how you get new capital stock. When people save more they also by definition invest more and when they invest more there is more capital.

Not the answer you're looking for? Browse other questions tagged macroeconomics saving solow or ask your own question.

11
Why does savings equal investment (scenario)?
3
Capital stock depreciation rate, how to calculate?
2
What is the actual paradox in the Paradox of Thrift?
2
How is the Solow residual measured?
5
Does savings lead to investment in physical capital?
0
Why does capital flight cause inflation?
1
Why does the bond market induce efficient allocation of capital?
3
"If markets are competitive, the rate of return on capital equals its marginal product, $f'(k)$ minus depreciation $\delta$"?
2
In an intertemporal (2-period) consumption model, why is the investment rate independent of discount factor?
1
Solow model and a change in the savings rate