How to find US total debt?

Sorry i'm not really an economist but I don't know where else to ask.

where it's about 350% of GDP in 2008, but when i can't seem to find source for total debt, only federal debt which seems to only be around 68% at the time

i'd like to find other countries total debt to GDP ratios too if possible. how do i go about this?

The figure provided by that author is widely inaccurate according to the official statistics.

According to the OECD the general government debt to GDP ratio ratio in 2008 was just $102\%$. Moreover, here is comparison to other countries: 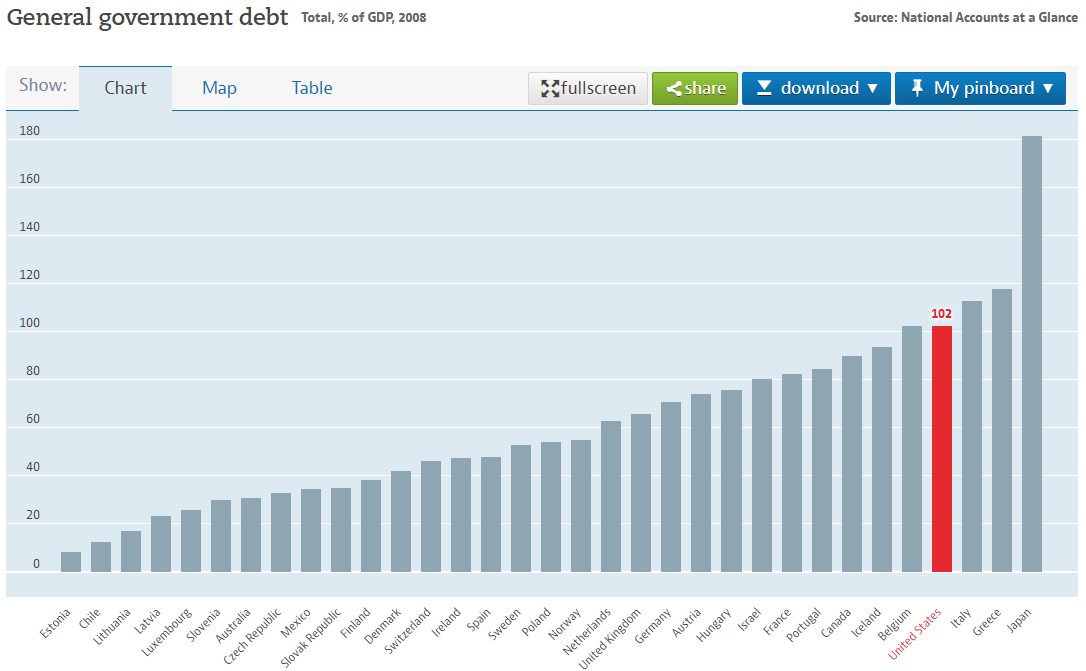 So it does include central, state and local government and even non-profits that are mainly financed by public funds.

Hence either there are some caveats that you are not mentioning in your question (perhaps it does not include just government debt but also some private debts or present value of unfunded future liabilities) or the author of the book made a mistake.

The World Bank's "World Development Indicators (WDI)" data bank is important and authentic source to get answers for your question.

It includes different series of data (Current & Historical) for countries around the world. Include of course what your are asking about: debt % of GDP.

You can also extract and download the data you selected in different types (Tables, maps, charts) and formats (Excel, CSV)

Not the answer you're looking for? Browse other questions tagged gdp debt or ask your own question.

3
Why does nation's total debt matter and not NIIP?
1
Public debt and GDP in post-socialistic countries
0
Public Debt as Percent of GDP
1
Debt bearing capacity
2
How can countries be in so much debt?
0
Debt Held By The Public
2
How can a sovereign debt ratio be high, but debt-servicing ratio be low?
1
How can increasing debt boost potential returns?
1
How could DTI(debt-to-income ratio) go well above 1?