If protectionist policies hinder economic growth, why do we need border taxes at all?

I understand that free movement of labour and goods are a net positive for economic growth, and protectionist policies, which would make exports and imports harder would not be.

But if this is the case, why do we need any border tax?

Like in the European Economic Area, where there is a free flow of labour and goods, there is no tax to bring something form one country to another, but if it comes from e.g. Russian there is. Would it make sense to get rid of that tax too, if every single country in the world would do it too?

From pure trade theory perspective there are cases where tariffs can improve welfare of a country provided it is big economy (economy that can affect international prices). And there can be also other arguments made in favor of some protectionism such as infant industry argument (protecting new industry until it is competitive), national security (you don't want to sell arms to your enemy - it would be foolish if US would let its firm sell intercontinental ballistic missiles to Iran), and tariffs can be useful for countries with week central governments which might have easier time to collect taxes on borders (see Krugman et at International Trade: Theory and Policy for overview of these arguments and others).

However, the above being said most economists believe that there should be free trade. Krugman (Nobel Prize winner for his work area of international economics) put this best when he written in his 1987 paper "Is Free Trade Passe?":

If there were an Economist's Creed, it would surely contain the affirmations "I understand the Principle of Comparative Advantage" and "I advocate Free Trade."

The reason why this is so is that even if tariffs can be sometimes improve welfare of a country, these results are contingent on other countries not retaliating (so you don't have trade war), or would be very hard to implement politically (often infant industry argument is abused by firms that do not need it but have political clout) and so on. 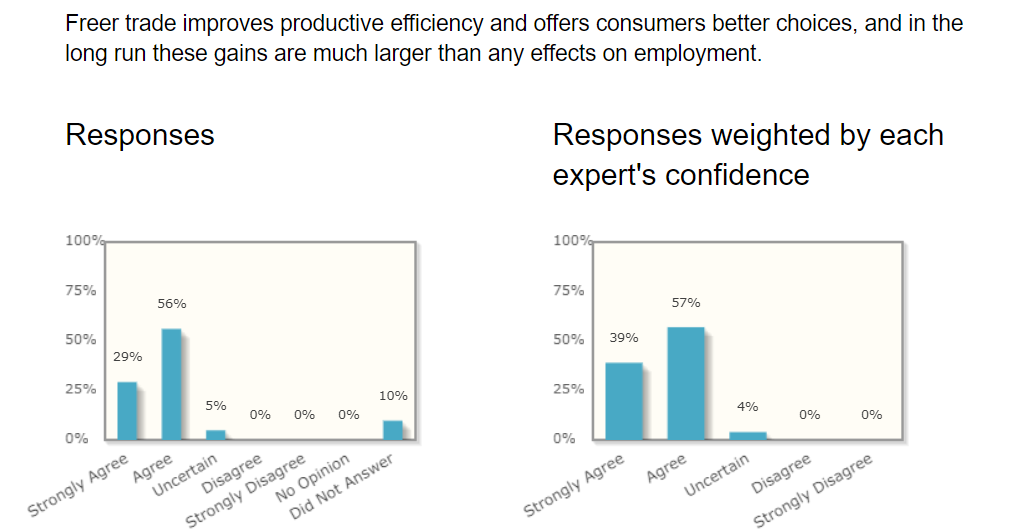 This being said, most economists would still argue that there are exceptional situations. For example, as mentioned above you don't want to sell arms (or crucial component of military equipment) directly to your enemy (although this can be still misused - Trump administration used this argument when it implemented Huawei chip ban and this was criticized by some economists). WTO allows for increases in tariffs for countries that break trade treaties or raise their own barriers unliterary (as sort of deterrent). Recently, some good arguments have been made in favor of environmental tariffs which would be applied to countries that do not have their own environmental policy.

In a specific case of Russia and EU there can be arguments for tariffs on the above mentioned environmental grounds or as a response to aggressive international policy that Russia is pursuing (landgrabs in Ukraine, threatening sovereignty of some Baltic EU members). However, this being said in principle if there would be free trade area between EU and Russia (with exception of dirty goods or some common environmental policy) it would be to the net benefit of both parties in long-run (if we ignore the political issues).

Not the answer you're looking for? Browse other questions tagged economic-growth taxation tariffs european-union protectionism or ask your own question.

1
Equality, Taxes & Business Growth
3
How does tariff increase inflation?
2
Protectionism and smaller countries
1
Are there economic models that predict (only) a medium/long-term negative effect of protectionism?
3
The economics of a "no deal" Brexit
3
Is there a way to adjust trade data between China and EU member countries for the Rotterdam effect?
0
How does protectionism harm the producers and workers in export sectors in the country implementing the protectionist policies?
2
Is my reasoning about economic growth and environmental sustainability correct?