I have 2 questions regarding ARIMA.

The MA terms are lagged errors (you don’t need to fetch them manually - for example in R you can use Arima function which does this for you and any program/language will have this basic function as mentioned +1 answer of @RichardHardy in +1 comment of @Dayne).

For example, following Verbeek (2008) A Guide to Modern Econometrics 4th ed pp 261 ARMA(p,q) in general form can be written as:  $$y_t=\theta_1 y_{t−1}+ … + \theta_p y_{t−p} + \epsilon_t+ \alpha_1 \epsilon_{t−1}+…+ \alpha_q \epsilon_{t−q}$$   The distinction between the effect of AR coefficients and MA coefficients is that they model fundamentally different forms of relationships with past realizations. AR terms model autocorrelation of the dependent variable - that is relationship with its own past realizations. MA terms model dependence on the errors that model made in the past. These have different implications for how persistent the series is.   I think it is best to visualize this. Here are two pictures I took from the above mentioned Verbeek from pages pp 260-261.

On this first picture you can see effect of autocorrelation in AR(1) process when $\theta=0.5$. You can see that even though we have only single AR term it’s effect is persistent across several periods. 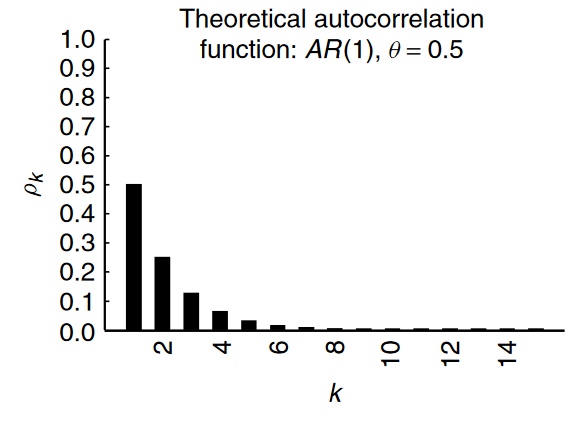 However, let’s consider now case of MA(1) process where $\alpha=0.5$. As you can see clearly below the effect is seen only for one period. 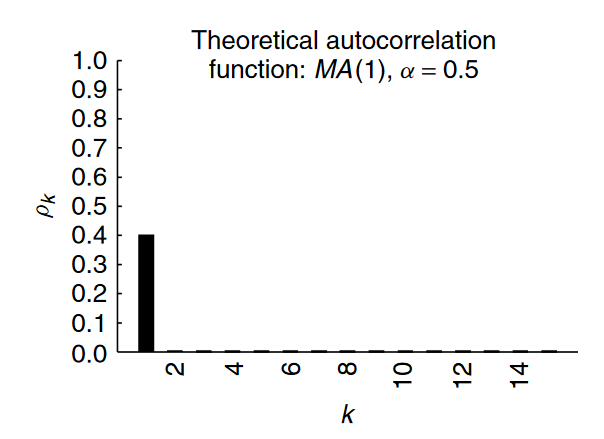 The advantage of including MA terms (provided that they actually should be there and you are not adding them just for heck of it), generally speaking, are that you will more accurately model the persistence in your model, you will have better fit and more accurate forecasts than otherwise. It is always important to get the right functional form functional form as wrong functional form can even bias the results. I mean on a very basic level (and I am oversimplifying here) this is like asking why we sometimes use $\ln y = \alpha + \beta \ln x + e$ instead of $y = \alpha + \beta x +e$ it is because we want to get the functional form right so there is no misspecification in the model.

Not the answer you're looking for? Browse other questions tagged time-series or ask your own question.

3
What to do for missing points in CPI time series?
4
VAR inversion - looking for a good resource
3
What is the reason why ARIMA(0,1,0) on $y_t$ and ARIMA(0,0,0) on diff($y_t$) are not identical time-series models?
3
Regression - Testing for autocorrelation in the presence of heteroscedasticity
1
Why must the lag length of the autoregressive term in an ARDL model be determined separately?