What Was the Accuracy of Macro Model in the Phillips' Machine (MONIAC)?

One of the most interesting economic 'artefacts' featured on the campus of my alma mater is the Philips' machine or Monetary National Income Analogue Computer (MONIAC) pictured below.

MONIAC was a hydraulic computer, with a rudimentary macroeconomic model, build by none other than William Philipps as a part of his dissertation. MONIAC could be used to visualize and even predict several macroeconomic variables depending on its calibration (such as interest rates or prices resp. inflation). The machine was originally intended just for classroom use (Bissell, 2007), but eventually several research/policy institutes around the world decided to commission the machine as well (for example New Zealand Institute of Economic Research bought one). This makes me wonder if the machine was ever accurate enough to be useful outside classroom (e.g. research/policy analysis/forecasting). Since it is based on rudimentary macroeconomic model I would expect relatively large forecasting errors.

I tried to do research on the MONIAC's accuracy but I am finding conflicting reports. According to Wikipedia:

To their surprise, Phillips and his associate Walter Newlyn found that MONIAC could be calibrated to an accuracy of 2%.

but no reference to the work where Phillips and Newlyn made the claim is provided.

I dug bit deeper and managed to find paper (Bissell, 2007) that claims the MONIAC's accuracy was reportedly only $\pm 4\%$ but again the claim is not directly supported by citation. In the next paragraph the paper cites Newlyn (1950) so I thought it might have the answer (since Wikipedia mentions Newlyn as well) but it turned out it does not mention any number for the accuracy of the machine.

This leads me to my question, is there any primary source in the economic literature for the accuracy of the MONIAC? If so what level of accuracy does it report? 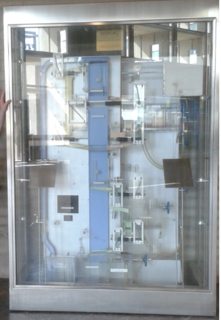 Phillips himself claims writing about Moniac like machines in 1950: "The accuracy obtained depends on the precision with which the machines are constructed, but there is no difficulty keeping it within about $\pm$ 4%" (p.284)

The article also points out that at the time of writing he was still building the MONIAC at LSE, but had already constructed one in Leeds. I suppose the LSE version turned out to be accurate upto 2%, and hence the conflicting informaton.

Two unrelated fun-facts: The MONIAC features in Terry Pratchett's Discworld novel: Making Money. As always in Pratchett's novels there are a lot of references to roundworld reality: introduction of paper money, outsourcing, inflation due to money dilution and many others

The Dutch have an expression "To have money like water" which in the Dutch context obviously means to have lots of money. The MONIAC is one of the few cases where it can be interpreted literally.

Not the answer you're looking for? Browse other questions tagged reference-request history-economic-thought or ask your own question.

14
Larry Summers on the causes of secular stagnation
1
What was Milton Friedman's opinion of Supply-side economics?
13
What have been the main developments in macroeconomics and financial economics since the 2008 financial crisis?
1
what is the most comprehensive History of Economic Thought book for an undergrad?
2
What was the “free Coynage” referred to in Dudley North's (1691) Discourses Upon Trade?
0
What was Paulus's “famous definition of price”?
3
What was the Rogoff & Reinhart spreadsheet mistake?
9
How was the year 1925 chosen as a dividing point in the history of economic thought?