What was the cause of the decline in remittances sent to Pakistan between 1982 and 2000? 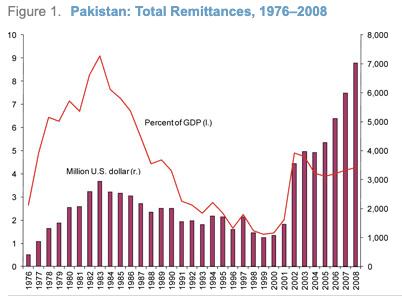 I am trying to find out what caused the 2-decade long decline in remittances as a % of GDP. I have spent an hour trying to search for explanations but haven't found anything. I know its a long shoot and thought it won't hurt to ask here to see if anyone can explain the cause

Perhaps more enlightening would be the reason why Remittances increased so much from 1976 to 1982, and then cooled off.

1977 was the year of a military coup in Pakistan (and the imposition of Martial Law), that was also, it appears, the beginning of deep structural socioeconomic changes. In such situation it is not uncommon to see a wave of emigration, among those that do not "fit well" in the new situation. But this rarely means that the emigrants severe all ties with the country back home, usually some family is left behind. Hence, increased Remittances.

In 1985 Martial Law was lifted and elections were held, and this could explain the downward trend.

So I would look into the emigration/repatrization flows in Pakistan during that era, coupled with the political situation and any economic reforms.

Not the answer you're looking for? Browse other questions tagged macroeconomics economic-growth data remittance or ask your own question.

3
How can I solve for total money spent if I use a non-constant MPC?
14
Larry Summers on the causes of secular stagnation
3
Sanity of lending out made-up money
3
what was the world's wealth in 2015?
2
What is the relationship between economic growth and equality?
0
What is the difference between Q4/Q4 and Y/Y GDP growth?
1
What is the relationship between population growth and economic growth?
3
What was the Rogoff & Reinhart spreadsheet mistake?