What is the point of monetary policy if most monetary variables are determined by non-monetary factors?

Monetary policy today is largely focused on setting interest rates in order to reach an inflation target / value of the currency. Interest rates are used to affect inflation by changing the demand and supply for saving and borrowing, i.e. demand. It is entirely monetary. However, I get the impression that inflation rates respond primarily to non-monetary factors, such as technological innovation, business growth, and the expansion of international trade. I also feel that this is true of the long-run interest rate, which has apparently fallen due to demographic changes (ageing populations causing a savings glut) and international trade imbalances (funds from trade surpluses in exporting nations being invested in importing nations' financial markets). None of these factors are the responsibility of a central bank to manage yet they seem to be the ultimate determinants of monetary conditions, at least in the long-run. Friedman's quote 'Inflation is always and everywhere a monetary phenomenon' springs to mind as a argument against what I am saying. Is my chain of thought a fair criticism of monetary policy?

These are simply thoughts I have been having so I apologise for the vagueness of the question. I'm looking for someone else's thoughts on the matter and possible ideas to develop the argument further.

I do not know of any serious economist who would think that monetary variables are not to great extent determined by the decisions of central banks.

Solving for price level and log-linearizing (so $\%$ changes in right hand side variables give us the $\%$ change in $P$) we get:

First observation that you can clearly see from the above is that technology growth or trade do not generally cause inflation. Both trade and technological growth expand production possibilities of our economies and hence they generally lead to higher real output $Y$. This causes deflation not inflation. Inflation is positive change in price level but increase in output causes decrease in price level.

The velocity depends on what nominal interest rate is so this can be affected by central bank, although velocity can depend also on other factors so it is not fully under its control.

Setting the theory aside empirically there is strong relationship between inflation and changes in the money supply. For example, consider the two scatterplot below (from Mankiw Macroeconomics pp 91-92). The first plot shows the relationship between money supply growth in the US and inflation in the US at different points in time (figure 1) and the second one does that internationally for averages for period 1999 to 2007 (figure 2). As you can clearly see data indicate very strong positive relationship. In addition you can see the same strong relationship between nominal interest rates and inflation. These data support also the theory from the above. Of course, correlation does not immediately tells you what the direction of causality is (but these are differenced data so the correlation is definitely not spurious and indicative of some relationship), but there are further academic studies that show that there is without doubt causal relationship between money supply and inflation, and also interest rates and inflation (for example see Maune, Matanda, Mundonde, 2020;; Barsky, 1987; Mankiw 2019; Romer: Advanced Macroeconomics 4th ed; Grauwe & Polan, 2005; and sources cited therein). 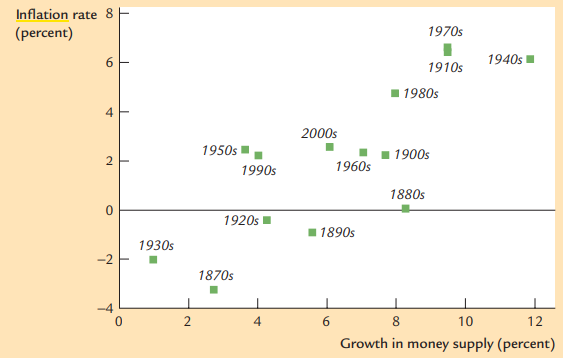 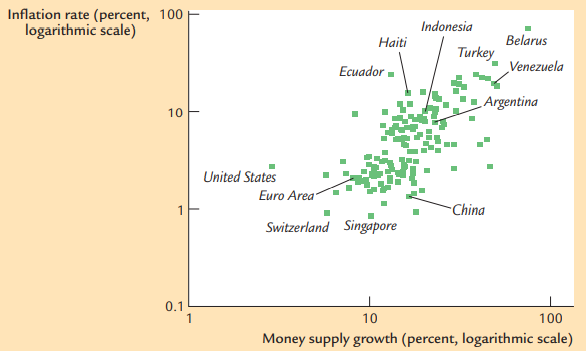 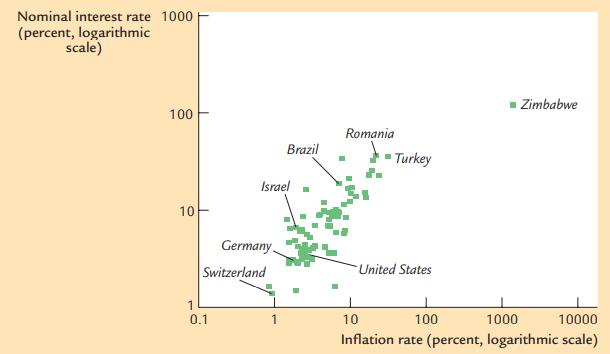 If you're dealing with low levels of inflation, then yes non-monetary factors have an effect. And they are unpredictable. That's why the Fed has been using a (modified) Taylor rule, where they look at (1) inflation and (2) the real economy (especially unemployment) and then adjust interest rates as needed. It's not perfect, but it's better than being consistently wrong like it was in the late 1960s and the 1970s.

Not the answer you're looking for? Browse other questions tagged inflation monetary-policy central-banking or ask your own question.

16
Should Finland leave the eurozone?
1
Macroeconomics - Fiscal/Monetary Policy and the Price level
4
What is the relationship between inflation and imports/exports?
2
Government debt and Fiscal Theory of Price Level
4
What is time inconsistency in monetary policy?
5
How and on what basis the inflation target is determined?
4
What was the US monetary policy like in the 70s?