Application of Laffer Curve on the price of Goods and Services

The Laffer Curve shows the relationship between Tax-Rates and the Amount of Tax Revenue Collected. Can't a similar principle be used on the price of goods?

To elaborate: The total revenue of a firm will only go up to a certain extent when they increase the price before it starts falling, just like the Laffer curve shows for tax revenue.

I couldn't find much on this on the internet; So wanted to see if there is anything wrong with this assertion.

Trivially this holds, in many cases, but it is not considered to be Laffer curve or application of the Laffer curve. This is just standard profit/revenue maximization. Let us focus on the revenue part. The total revenue is given by price times quantity $TR=pq$, now quantity will depend on some demand, for example the demand could be $Q = 100 - p$, so the total revenue will in terms of price be:

Which in this case will also give you something that looks like Laffer curve, as you can see on the plot from simulation I made in R: 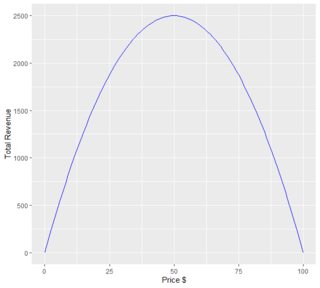 Not the answer you're looking for? Browse other questions tagged price or ask your own question.

4
Why is the Market-Clearing Price also an Equilibrium Price?
1
Converting price for service in the foreign market to local price
5
What Creates the Price in the First Place
3
How to track costs and calculate price?
0
Difference between the minimum selling price and the actual selling price
1
Supplier offers “Price Protection Tariff” w/o exit fees, and more expensive Variable Price tariff. Does that mean it is betting on the price falling?
0
Demand Curve Price not perfectly elastic