As more firms enter the market, the quantity demanded at a given price level will thus decline. Therefore, the perceived demand curve for any individual firm will continue to shift leftward until the excess profit dries up.

But my question is, will the slope of the demand curve change as it moves leftward?

Also, there's something that caught my eyes when studying this chapter. I understand that the demand curve won't stop moving to the left until the excess profit disappears. And by that point, the following two statements will be satisfied: (a) the demand curve will be tangent to ATC, and (b) MR=MC.

But I am wondering, is it possible that the demand curve intersects ATC at a point where MR = MC?

But my question is, will the slope of the demand curve change as it moves leftward?

The slope does not change because one assumes that relative prices and consumer preferences do not change. This is a ceteris paribus interpreation you want to see what happens when new competitiors enter the market (keeping everything else as it is). There are the same consumers buying the same productons but simply less (in numbers) for that single firm. Graphically the demand curve makes a parallel shift to the left.

But I am wondering, is it possible that the demand curve intersects ATC at a point where MR = MC?

Since graphs are easier to understand than text i made a little drawing, let $D'$ be the competitive demand and $D$ the demand line that intersects the ATC (your question): 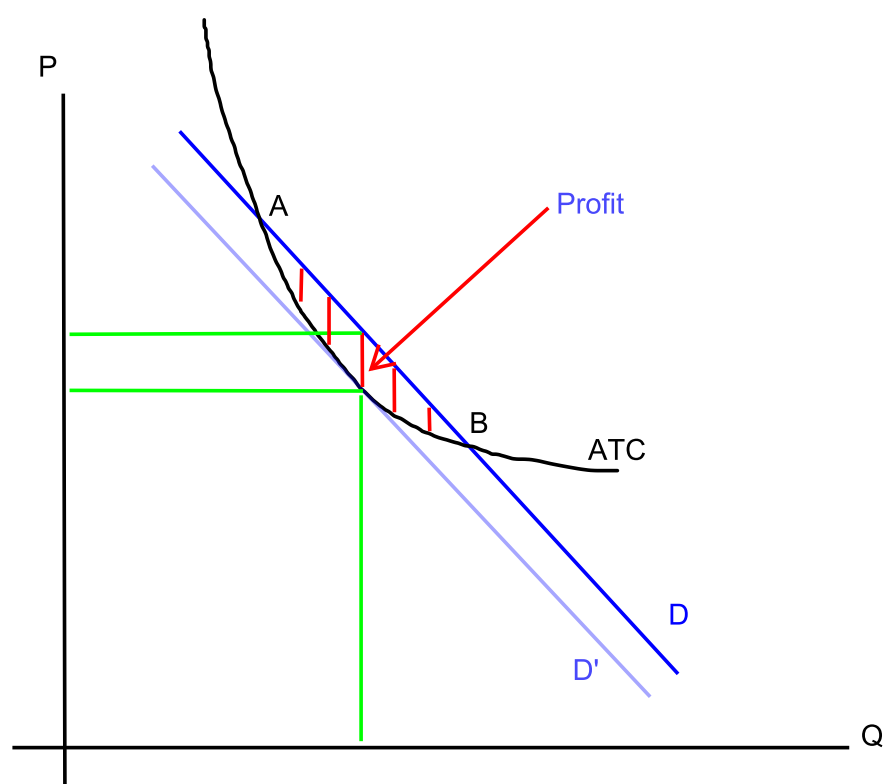 The short answer is no. The longer one is, that it is not an optimal outcome. Remember that $(P_m - ATC(Q_m)) \cdot Q_m$ is the potential profit of the firm (This is simply the difference between the ATC and demand curve, the red lines in the graph). If the demand curve interesects the ATC, there will be opportunity for the firm to change its production plan and make a positive profit. This changes the MR curve, new equilibirum will statisfy MR=MC but it will not be at the intersection point of demand and ATC curve (Points A and B). The optimal monopolistic quantity will always be greater A and smaller B because between those two points profit is greater than at the intersection points itself.

Not the answer you're looking for? Browse other questions tagged microeconomics competitive-equilibrium monopolistic-competition or ask your own question.

2
Why is AC = MC in the monopoly?
3
Why does demand curve shift in, in a monopolistic competitive market?
0
Would you consider airport parking to be a monopoly or a monopolistic market?
0
Should Company B enter the market in the following cases
1
Applicability of the linear demand function
2
How would a perfectly competitive industry respond to a macroeconomic demand shock in the long run?
1
Will there always be excess profit in the Cournot model equilibrium/monopoly