Why should prices come down (in theory) in an educated society with a well-run government?

In Chapter 1 of Robert Kiyosaki's "Rich Dad, Poor Dad", the rich dad says: "In an educated society with a well-run government, prices should actually come down".

Is there any economic theory that would support that claim?

Would that require a government/society of a particular ideology?

Sorry for the lack of research, but I was never big on studying economics. I'm mostly a software guy and an insect geek. I'm mostly looking for pointers - e.g. which economist I should read in order to understand where that quote is coming from.

Is there any economic theory that would support that claim?

In science of economics it's considered that predictable mild inflation is better than deflation (i.e. prices going down), as deflation causes higher unemployment and risks to spiral into self-systaining cycle which can be problematic to break. Also, inflation allows employers to decrease real wages of workers over years by just not raising wages (or raising not high enough). And unlike deflation, inflation stimulates people to invest money, rather than sit on them doing nothing, knowing that they will be able to buy more with them if they will just wait.

The quote is extremely ambiguous, and answer will depend on exactly how you interpret the 'well-run government', whether author assumed everything else stays constant, and what is meant by prices.

First, from macroeconomic theory we know that ceteris paribus when aggregate supply expands ($LRS_1$ moves to right to $LRS_2$), aggregate prices will decrease, as shown on the graph that I drew below: 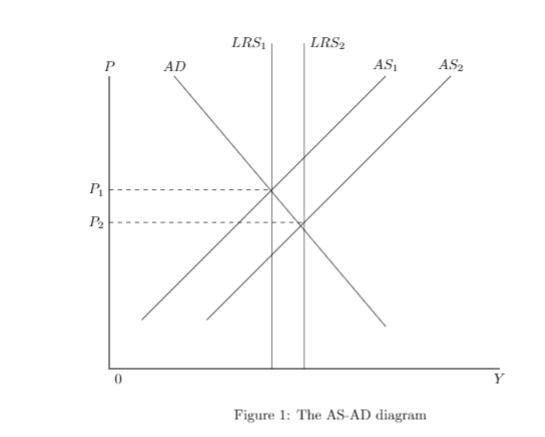 Now, education (human capital) definitely increases productive capacities of an economy which shifts LRS to the right. However, it is not enough to have well-educated people with constant level of human capital - to increase the output amount of human capital has to increase (i.e. people are getting more educated than before - or have education of higher quality). When it comes to 'well-run government' assuming well run here means in a manner that allows economy to produce more, having well run government would also shift LRS to the right.

So if the statement is interpreted as a ceteris paribus statement it would be supported by economic theory.

However, in real life it is not reasonable to say that all else will be constant. As mentioned in the other answer, there is consensus in economics that mild inflation (around 2%) over business cycle is desirable (If you want to know why see discussion in this old econ.se answer by FooBar).

Consequently, a 'well-run' government (interpreted as government that listens to experts) would always conduct its monetary policy in a way that would ensure mild inflation over business cycle meaning you would see prices forever increasing.

However, the statement could be still salvaged. In economics, we recognize nominal and real quantities because effects of inflation can be deceptive. Nominal prices increase due to inflation increases, however at the same time inflation also increases people's wages so inflation does not mean things are getting more expensive in real terms. If you recalculate everything at constant prices then even with inflation on average things will be getting cheaper over time as aggregate supply expands.

So in conclusion, depending on how you look at the statement you could say there is a support for it in the literature. However, at the same time the statement is extremely vague so it is also possible to interpret it in a way that would not be supported, so it boils down how gracious you want to be to the author in assuming what they actually meant by the statement.

Not the answer you're looking for? Browse other questions tagged macroeconomics inflation theory government or ask your own question.

4
Why doesn't the government create money, spend it for free without interest, and recollect it with taxes?
0
Increased production costs associated with increased output produced? Why do firms have prices increase with the SRAS or Supply Curve?