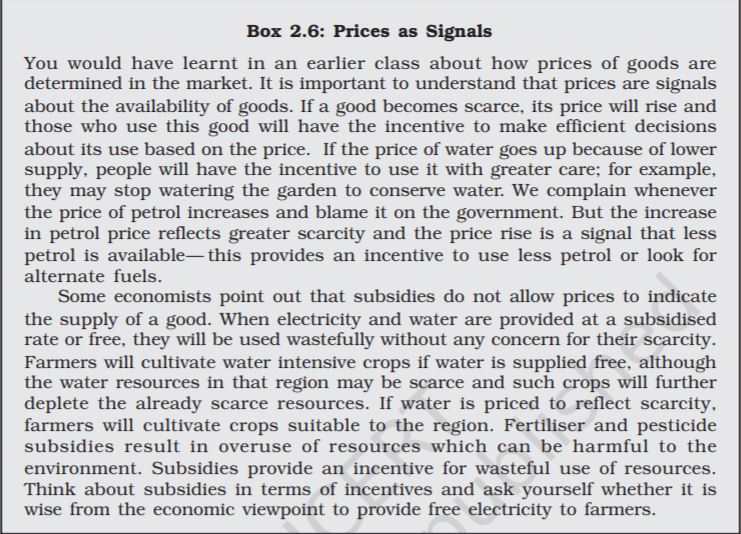 The given explanation about how subsidies unintentionally can result in resources being wasted does make sense to me. However, I just wanted a second opinion on my take on this.

To me, it seems like a very trivial claim with no little relevance in the real world. Can't this be easily avoided if, let's say, we let the said farmers consume the resources they want initially. Then, the government only releases subsidies if they deem the amount of resources used as appropriate and necessary.

All in all, please inform me of any aspects I might be missing in interpreting the given picture or any shortcomings in my "solution" to this.

The claim is definitely not trivial, otherwise we would not observe frequent draughts due to government subsidies (like drought in California that is at least partially caused by bad water and farming subsidies), environmental degradation and overuse due to subsidies to coal mining and oil production (see this IMF explainer), not even mentioning that often these subsidies perversely redistribute resources from poor to rich. Overfishing, is not just result of tragedy of commons but also prevalent bad fishing subsidies (see this article in The Economist), and so on.

Furthermore, your proposed solution of:

Can't this be easily avoided if, let's say, we let the said farmers consume the resources they want initially. Then, the government only releases subsidies if they deem the amount of resources used as appropriate and necessary.

would not work, because in repeated interactions people will expect the subsidy. In economics, subsidies are typically considered to be tied to some specific economic activity, more specifically some production (i.e. it is not the same as redistribution where you just transfer resources). Hence, farmers would essentially figure out how the subsidy varies with economic activity (unless you want to propose completely random normally distributed subsidy with mean zero and what would be the point of that?), and eventually realize that if they produce x the subsidy will be y. Furthermore, such arrangement would defeat the purpose of subsidy. As mentioned above subsidy is used to subsidize some economic activity, if you just want to redistribute resources you can give them regular transfers. If you would first let people make their choices and then subsidize the activity, assuming people would be completely myopic and not realize post hoc subsidy was connected to the economic activity, you just created convoluted welfare transfer, for which we already have better systems.

This is not to say that subsidies can't be useful tool for government in some situations. However, in most of the cases those situations occur when the price mechanism does not work properly (e.g. there are some positive externalities meaning the price does not reflect all important information). However, if price system is working properly distorting it often leads to either shortages or inefficient overuse.

Of course, if government would only use subsidies when appropriate there would not be any issue. I mean this is obvious, that is like saying homelessness can be solved by people getting houses, or opioid pandemic by doctors stopping to overprescribe opioids and patients taking them responsibly, or solving police shootings by having them just shoot when arresting dangerous criminals with guns. But neither getting right subsidies or solving those other issues is as simple as that, otherwise our societies would not have the issue.

When it comes to subsidies, the issue is that it is very hard to determine what optimal subsidy is in a field. Next, even once you manage to identify problems which require subsidies and what the value of subsidy is there are still political problems as alluded to by Dayne's +1 comment.

Moreover, the point of the box in your question, which is often mentioned in one way or another in almost every single textbook is to explain how price system functions to distribute information and give incentives to people to act on that information. This is something that most non-economists do not understand.

Consequently, the information in the box is both non-trivial and very relevant. It is relevant and non-trivial because most people do not understand how price system works and what happens when it is distorted. Moreover, we can empirically often see subsidies being misused and often even in areas connected to climate change (as mentioned above), and given that climate change is likely one of the defining issues of our 21st century, I would say this makes this issue as relevant as ever.

Not the answer you're looking for? Browse other questions tagged resource-economics subsidies or ask your own question.

4
How does the U.S agriculture subsidy not constitute export subsidies under the WTO?
2
Why does the European Union give subsidies to farmers?
0
How are petro states able to maintain gasoline subsidies without black market export smuggling?
2
Why does China spend so much on agricultural/farming subsidies?
0
Why agricultural subsidies were targeted in 1991 Indian Economic Liberalization