How did the US Government fund its deficit when the Federal Reserve was pruning its balance sheet in 2018-1019?

The primary way for Governments to fund their deficits is by issuing new currency from the central bank against new treasury bonds.

How did the US Government fund its deficit during this period?

From debt bought by households, firms and foreign governments, as government always did.

This question is based on fundamentally flawed premise that:

The primary way for Governments to fund their deficits is by issuing new currency from the central bank against new treasury bonds.

No, this is not a primary way for most governments to fund its deficit. This might occur during some periods, for example large portions of the new debt US got while fighting covid was financed by Fed purchases, but historically only very small fraction of government spending is funded by expanding money supply.

For most of the countries, money creation accounts for less than 2 percent of real GDP.

Whereas, empirically average government spending to GDP is somewhere around 40% for most countries (see OECD statistics here). Consequently, it is empirically not important source of revenue.

For example, the composition of US government debt by ownership is according to the Committee for Budget Responsibility as as follows: 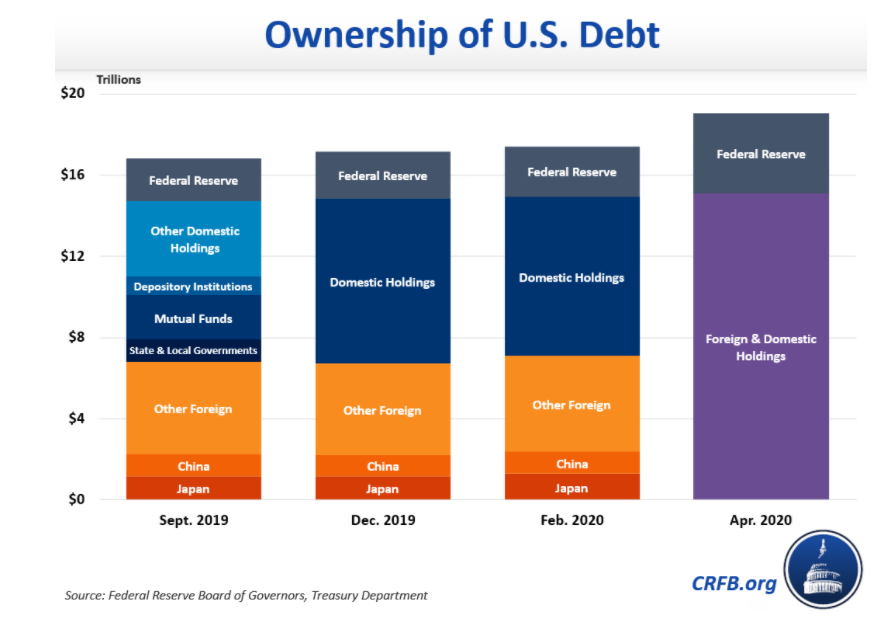 As you can see the Fed owns roughly 13% of all US government debt. Now that is total debt not a deficit, but total debt is nothing more than accumulation of yearly deficits over time. Consequently, if most of the US deficits were funded by Fed, Fed should also be the biggest owner of US government debt, but clearly empirically it is not, so at least for the US clearly central bank is not responsible for funding most of the deficit generally (i.e. there might be some periods when it is like current covid crisis, but generally it does not do that otherwise it would be biggest holder of a debt).

You will get slightly different picture in each country but for most countries and most of the time it will not be accurate to say that most of the government deficit is funded by central bank. As a matter of fact money creation usually pays only for very small amount of the overall spending.

Not the answer you're looking for? Browse other questions tagged government-debt federal-reserve government usa government-spending or ask your own question.

1
Federal Reserve Securities Coming Due
2
When a central bank buys government securities, is this exactly equivalent to printing money?
1
How does the Federal Reserve unwind the asset purchasing scheme announced in response to the 2020 Coronavirus Pandemic?
3
Why's Federal Reserve buying individual corporate bonds, when corporations have been selling them successfully?
3
Are quantitative easing and helicopter cash really different tactics? And how does QE relate to Modern Monetary Theory?
0
Why is market absorption of issued US Treasury Bonds (with the Fed purchase plan) a problem?
3
How can the Fed enforce exit criteria if they begin yield curve control?
2
Is the Federal Reserve waiving itnerest payments on its treasury portfolio?