Are US federal reserve notes money, or merely currency?

I have heard from my friend that US federal reserve notes (aka dollar bills) are not actually money, but merely currency. He told me that money and currency are different, and that money is currency with some extra properties. That is, all money is currency, but not all currency is money. What is the truth of this? Is it the case federal reserve notes are merely currency, and not money as is usually thought?

Federal notes are both money and currency.

Currency can have two meanings:

Money is more broad term in economics for a thing that serves as medium of exchange, unit of account and store of value (see Mankiw Principles of Economics 8 ed. pp 604). Consequently, money can be viewed as a sort of 'umbrella' term that encompasses currency but also much more. That is all currency is money but not all money is currency. For example, money on deposit account will be considered money but not currency. Checks are also money but not currency. In addition, broad money will include also assets that can be easily converted to traditional money such as treasury bills.

However, most of money does not have special extra properties vis-a-vis currency. There is little practical difference between money in your wallet and money on your deposit account. Sure deposit accounts with debit cards might be more convenient (take less space, most cards now have contactless pay etc) but economically they are not special. This being said when discussing broad money, such as T-bills, you could justify saying they have extra properties as well.

Currency, in the form of Federal Reserve Notes, is a component of money supply measures in the United States.

The M1/M2 money supply includes currency and other liabilities of banks.

The money supply measures reflect the different degrees of liquidity—or spendability—that different types of money have. The narrowest measure, M1, is restricted to the most liquid forms of money; it consists of currency in the hands of the public; travelers checks; demand deposits, and other deposits against which checks can be written. M2 includes M1, plus savings accounts, time deposits of under $100,000, and balances in retail money market mutual funds.

The chart below shows the relative sizes of the two monetary aggregates. In April 2008, M1 was approximately 1.4 trillion, more than half of which consisted of currency. While as much as two-thirds of U.S. currency in circulation may be held outside the United States, all currency held by the public is included in the money supply because it can be spent on goods and services in the U.S. economy. M2 was approximately 7.7 trillion and largely consisted of savings deposits. 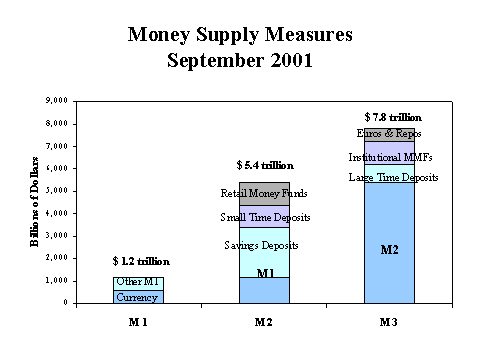 In March 2006, the Board of Governors ceased publishing the M3 monetary aggregate.

The short answer is currency (in everyday use) means paper money and coins in circulation, while money means something that serves as a means of payment, a store of value, and a unit of account.

So: Federal reserve notes are a form of currency, but not the whole of currency, since coins are included, too.

Also, Federal reserve notes are a form of money, but not all of money, because (for example) a bank balance in your checking account is also money.

Not knowing how your friend defines "currency" as opposed to money. All I can offer is that there are four different types of money issued in the United States.

Not the answer you're looking for? Browse other questions tagged money or ask your own question.

7
How is money created on net?
2
Can the US dollar collapse and what are steps that I should take in the event that this happens?
8
How and when is M0 money created?
1
How does the private bank reserve increase when money is being withdrew?
4
Gold coins as currency?
1
Fed must hold collateral equal in value to notes in circulation
1
How is reserve money 'multiplied' by the banking system?
1
why is Fed creation of fiat money valid?
0
How does the size of the largest cryptocurrency compare to the largest traditional currency?