Are stimulus checks created out of thin air? [closed]

Ask Question
Asked 8 months ago
Active 8 months ago
Viewed 112 times
-1
$\begingroup$
Closed. This question is opinion-based. It is not currently accepting answers.

My question is regarding the checks which the US government has sent out during the pandemic. Below is a chart of M2 money supply increase as a result of it: 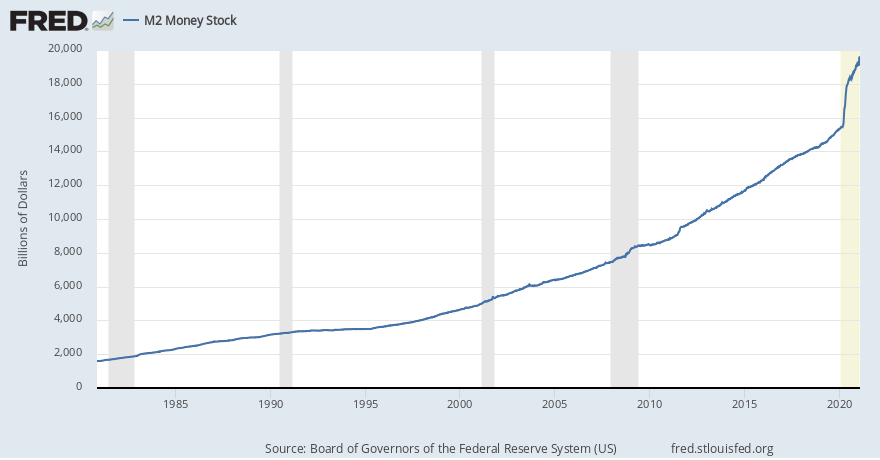 It is also said that 40% of all the m2 money supply in circulation has been put in "created" during the pandemic.

Usually money that the government creates in form of stimulus such as in 2009 and subsequently has been in form of bank reserves, against which banks loan out to businesses. So funds do not make to people in form of "money in the pocket" so to say. Thus the m2 money supply has more or less been constant. Except now...

My question is who is sending these checks to people? Banks or is it coming directly from FED? Are these checks against bank reserves which were created or was this money "printed" out of thin air?

The reason I ask is, this is not a loan which one has to return with interest, so it would seem that this new M2 money is not against any "bank reserve".

The Treasury Department of the U.S. federal government sends the checks. Assume all such payments go to customers of commercial banks and add to their checking deposit balances.

The short answer to the question is as follows. If Treasury uses debt management then on average it does not increase the M2 money supply as measured on the aggregate balance sheet of commercial banks. The increase in M2 would then be caused by Fed asset purchases from non-bank counter-parties or by the conversion of commercial bank liabilities outside M2 into M2 liabilities when banks deal with non-bank customers.

Treasury debt management means the sale of Treasuries to cover a cash flow deficit or the redemption of outstanding Treasury securities to dispose of a cash flow surplus. Most of the time Treasury anticipates a deficit and sells enough Treasuries to cover the deficit and add to its TGA balance as desired. Other times Treasury can run down a large balance in the TGA to offset the need to sell Treasuries. Other times Treasury has a surplus due to tax season and would net redeem Treasuries rather than add to its TGA balance.

If Treasury uses debt management to cover the deficit then on average no reserve balances are added to the assets of the commercial banks and no net money is added to the liabilities of commercial banks as M1/M2 money supply because Treasury drains just as much reserves and M1/M2 as it adds via deficit spending during a period.

Note the net new Treasury securities are printed out of "thin air" when debt management is used to cover the deficit so high powered financial assets are created by the federal government.

There are many parts to this question, I will offer a minimal answer.

When checks are cashed, they are cleared by the Fed reducing the Treasury’s balance, and sending reserves to the customer’s bank. If nothing else happens, this would grow the money supply.

The M2 chart you are showing picks up what the Federal Reserve is doing as part of monetary policy: Quantitative Easing (QE). There are many, many questions on this website about QE that you can consult.

Correcting some incorrect statements in question:

It is also said that 40% of all the m2 money supply in circulation has been put in "created" during the pandemic.

No, your own graph shows that is false. According to the data on M2 provided by FRED dataset and also the same data as shown above, money supply as measured by M2 increased during pandemic by about $25.8\%$ - far cry from the $40\%$ mentioned in the question.

Answers to questions above:

My question is who is sending these checks to people? Banks or is it coming directly from FED?

Neither. It should be sent by the Internal Revenue Service (IRS) (which is part of US treasury).

Are these checks against bank reserves which were created or was this money "printed" out of thin air?

The money comes from US treasury. US treasury gets its money primarily by a) taxes, b) issuing bonds (or more broadly all sort of debt instruments). Only very few banknotes are nowadays printed by the bureau of engraving and printing that is under US treasury, or coins minted by the mint. For all practical purposes those can be ignored as they form very small amount of new money created each year.

Some of US bonds are bought by US central bank (Fed) which does that by creating new reserves. Although, this is just government creating money and 'borrowing it to itself' - Fed has to send all its profits straight to the US treasury.

Furthermore, Fed does not fund the whole US budget, it is just part of the mix and so consequently the stimulus is funded by mix of taxes, bonds issued to households, firms, bonds issued to other government and then Fed as well.

Not the answer you're looking for? Browse other questions tagged banking central-banking federal-reserve usa or ask your own question.

6
How does the money supply behave when bank loans are repaid?
0
Do banks pay each other from their reserves?
2
Is money mostly created (out of nothing) by banks making loans?
1
Initial creation of reserves
1
Where does the money required for reserves and loans come from?
0
Is the equity lending involved in naked short-selling structurally equivalent to fractional-reserve banking?
5
Why are the financial intermediation theory of banking or fractional reserve theory of banking still accepted despite evidence to the contrary?