If there is a negative production externality of agriculture which is water wastage, and the government provides a 100% subsidy to the farmers so they can buy irrigation gadgets to reduce water wastage, thus eliminating the negative externality of production and increasing and improving their yield, will the graph look like what I attached as if MSC curve does shift to overlap with MPC (sorry for typo on graph) then they won't be intersecting at the optimal price and optimal quantity. 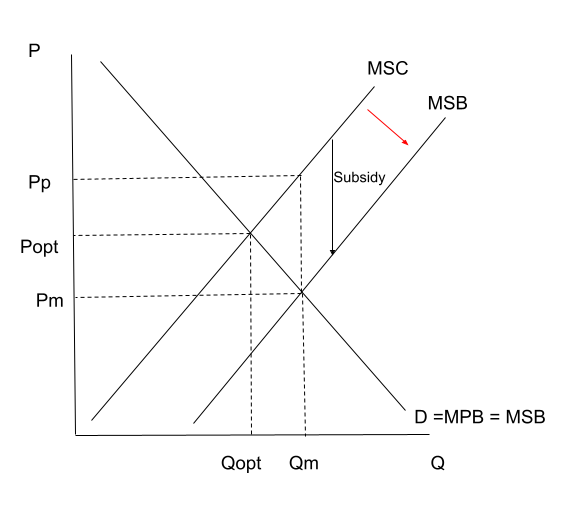 I suggest that the graph could be improved in two ways (apart from the point, which you seem to recognise, that the upward-sloping line labelled MSB should be labelled MPC (marginal private cost)).

Firstly, the inclusion of the vertical arrow labelled subsidy rather suggests that the vertical distance between the two marginal cost curves equals the amount of the subsidy (per unit of output). This is unlikely to be the case: there is no particular reason why the cost of the gadgets should equal the social value of their effect in reducing wastage of water. Instead you might add an explanation that the result of the subsidy, via its effect in reducing wastage, is to reduce the MSC of the agricultural production, shifting the MSC line down and to the right.

Secondly, there is nothing in the graph to represent the effect of the gadgets in improving yield. It might be assumed that an improved yield implies a reduction in marginal private costs (although that is not necessarily the case, eg the harvesting of the extra output might disproportionately raise labour costs). If that is a reasonable assumption in the context, you might draw a second MPC line below and to the right of the first (which would also represent MSC) which might be labelled (MPC with gadgets = MSC).

Not the answer you're looking for? Browse other questions tagged microeconomics externalities market-failure subsidies or ask your own question.

2
I need something like “how to calculate equilibrium price for complete idiots”
0
What would a negative externality diagram look like if the initial price is equal to 0 and then increased with tax?
5
How would you call a market for kidney donors and recipients?
0
What are the advantages of using demand systems estimation? How is this different from individual demand estimation for product?
0
How would you draw a MSB,MSC,MPB,MPC graph for this?