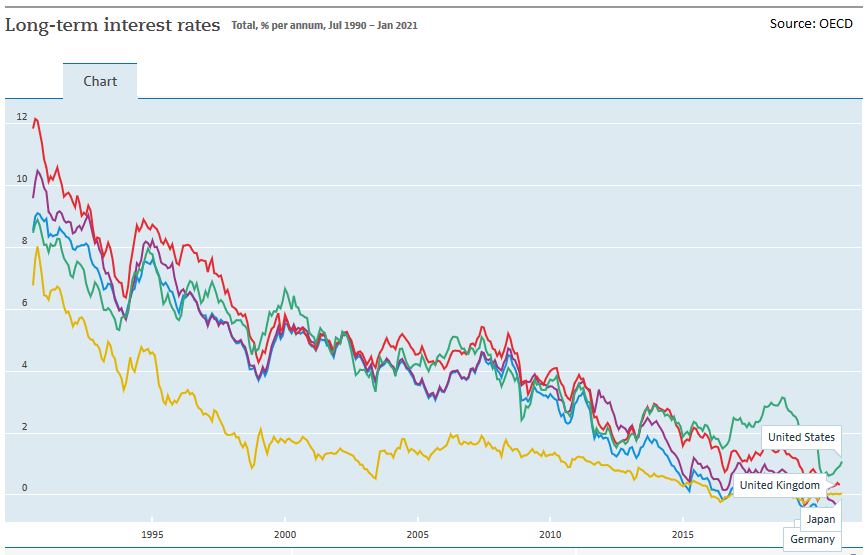 What are the risks to borrowing large sums in the current enviroment? Would inflation occur?

I was recently reading an article about Rishi Sunak's (UK Chancellor) aim to rein in public spending in the UK post pandemic, the implication being he was planning to do this much earlier than other countries.

Since the interest rates are so low borrowing appears very cheap. Conventional gilts (fixed interest) make up 75% of the UK government portfolio and the interest rates on these are approaching zero (see graph above). There is strand of thought that government ought to borrow lots while it can, this opinion appears to be widely held. The spending so far is short term stimulus such are furlough payments, not medium/long term investment.

A turbo charged economy with low unemployment could lead to higher demand, higher prices and then inflation. However for countries hit hard by the pandemic unemployment is high (5% in the UK) and likely to increase as furlough measures are removed.

What are the risks to continuing to borrow large amounts ($100Bns)to spend on short term stimulus right now?

What economic reason would there be to not do so?

The potential risk of borrowing too much now is that interest rates will be higher when the debt has to be rolled over. Even though it is completely correct to say that most government securities have fixed interest rate, most of these securities are not perpetual, meaning they expire at some point.

For example, as mentioned on the UK Debt Management Office website:

This carries some potential risk. For example, suppose for the sake of argument government could borrow now $£ 1000$ with coupon rate $0\%$ (coupon rate is essentially the interest paid on face value of fixed income security), for 5 years. That is great deal now but in 5 years government will face the following problem, it will either have to repay the debt (which could be difficult to do for country with high level of debt) or instead roll it over meaning the government issues another $£ 1000$, but this time if interest rates are higher and government is forced to issue it with, let us say $20\%$ coupon rate that would be a problem because suddenly the cost of servicing debt to the government would skyrocket.

This being said, it is worth noting that even though the above is potential risk that should be taken seriously, most economists believe that governments should borrow more when the interest rates are low, especially if they do so long term (e.g. 10, 30 or 50 years) or even better some argue they could start issuing perpetuities i.e. debt instruments where principal never has to be repaid (see discussion in Corsetti, Erce, Pascual 14 May 2020). This is because issuing long term debt or perpetuities locks the low interest rates on that particular debt for very long time or indefinitely meaning there would be plenty of time to consolidate public finances if interest rates were rising sharply. In addition, government has also other venues how to handle debt such as monetization of the debt although that can have some serious disadvantages as well but discussing that is beyond scope of this answer. Consequently, while it is definitely real risk as you pointed out in the question itself most economists would argue governments should take advantage of these low rates while they can.

Not the answer you're looking for? Browse other questions tagged macroeconomics interest-rate government-debt quantitative-easing or ask your own question.