Did William Nordhaus exclude 87% of economic industries from his climate change analysis?

In this approach, estimates of the “physical effects” of climate change are obtained one by one from natural science papers, which in turn may be based on some combination of climate models, impact models, and laboratory experiments. The physical impacts must then each be given a price and added up. For agricultural products, an example of a traded good or service, agronomy papers are used to predict the effect of climate on crop yield, and then market prices or economic models are used to value the change in output.

Keen then quotes (Nordhaus 1991) and an FAQ from the IPCC indicating that both Nordhaus and the IPCC explicitly exclude 87% of economic industries from their approach towards estimating damages, since these industries are composed of activities performed indoors. As Keen notes, just because an activity is performed indoors does not mean that it is not affected by climate change. He quotes Nordhaus saying the following,

Table 5 shows a sectoral breakdown of United States national income, where the economy is subdivided by the sectoral sensitivity to greenhouse warming. The most sensitive sectors are likely to be those, such as agriculture and forestry, in which output depends in a significant way upon climatic variables. At the other extreme are activities, such as cardiovascular surgery or microprocessor fabrication in ‘clean rooms’, which are undertaken in carefully controlled environments that will not be directly affected by climate change. Our estimate is that approximately 3% of United States national output is produced in highly sensitive sectors, another 10% in moderately sensitive sectors, and about 87% in sectors that are negligibly affected by climate change.

The IPCC FAQ is quoted as saying,

Such an obvious blunder on the part of both Nordhaus and the IPCC would be shocking. However, I'm a bit skeptical that Keen fully understands the literature here. In a later section, Keen seemingly admits that he dove into the climate econonomics literature in order to find a flaw, rather than dispassionately reviewing it in order to uncover truth. He says, "While locating the fundamental flaw in the ‘enumeration’ approach took some additional research, the flaw in the statistical approach was obvious in the first reference I read on it." Given my skepticism of his scientific neutrality, I wanted to understand how Nordhaus, Tol and other climate economists would reply to his critique.

Did William Nordhaus exclude 87% of economic industries from his climate change analysis?

No, Nordhaus did not do that but Nordhaus did exclude $\approx 87\%$ economic activity as measured by national income and Keen either confuses economic activity with industry or does not use common terminology in economics (or given that he is known for sensationalism perhaps because $87\%$ of all sectors would be even bigger portion of the economy).

As the table below from Nordhaus (1991) shows, Nordhaus split economic activity into 12 sectors, 11 of which can be considered industries (the word industry is in economics commonly applied to private sectors not to public sector, see also usage in texts such as Mankiw Principles of Economics).

However, those $42\%$ of not included sectors did generate $87\%$ of economic activity.

In addition, the assertion that Nordhaus excluded these $42\%$ of sectors on account of them 'being indoors' is simply wrong here.

Nordhaus references indoor activity in that section only in one paragraph where he says the following:

The most sensitive sectors are likely to be those, such as agriculture and forestry, in which output depends in a significant way upon climatic variables. At the other extreme are activities, such as cardiovascular surgery or microprocessor fabrication in 'clean rooms', which are undertaken in carefully controlled environments that will not be directly affected by climate change.

Hence he uses 'clean rooms' as an example of an extreme case of place not directly affected by climate change. I am an economist not a biologist/climatologist, so I can be wrong, but I think stating that clean rooms - hermetically sealed and sterilized rooms where every single precaution is made that not even a speck of dust will make it in - will not be directly affected by climate change is not completely unreasonable.

Additionally, note the above was never used in the paper as a primary reason for exclusion of the $42\%$ of the sectors (many of the $52\%$ included sectors such as electricity production are also done mostly in indoor environments e.g. nuclear/coal/gas/oil plants).

The true reason why the sectors were excluded is that Nordhaus was simply not able to find evidence for significant negative effects of climate change on those industries:

But for the bulk of the economy - manufacturing, mining, utilities, finance, trade, and most service industries - it is difficult to find major direct impacts of the projected climate changes over the next 50 to 75 years.

Note, Nordhaus does look at various reports like EPA (I988). U.S. Environmental Protection Agency, The Potential Effects of Global Climate Change on the United States draft to the congress to identify which industries are at risk. One could here levy a criticism that 'absence of evidence is not evidence of absence', but this is hardly some sort of willful ignorance or a blunder on the side of Nordhaus. 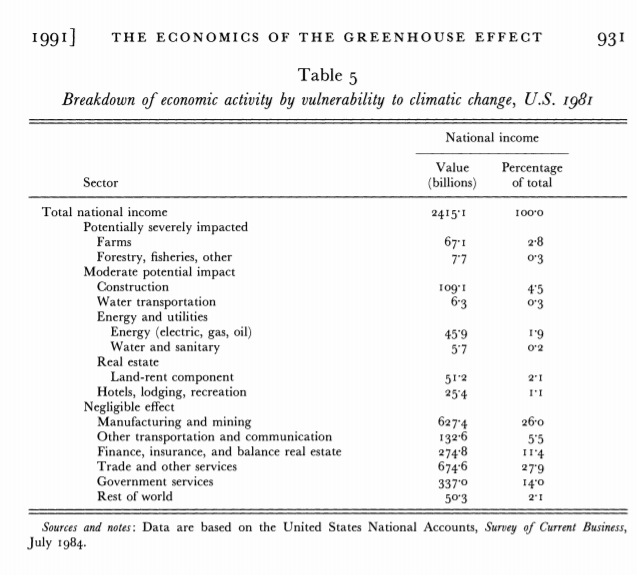 Not the answer you're looking for? Browse other questions tagged macroeconomics climate-change forecasting or ask your own question.

7
In microeconomics : is this the contradiction in the atomicity of firms ?

7
What is William Nordhaus' contribution to the economics of climate change?