MRU has the following question on a quiz:

Suppose the government forced all bread manufacturers to sell their products at a “fair price” that was half the current, free-market price. To keep it simple, assume that people must wait in line to get bread at the controlled price. Would consumer surplus rise, fall, or can’t you tell with the information given?

According to them, the correct answer is:

I don't understand how they arrive at this answer. It seems to me that without the price ceiling, the surplus will be close to 0, since there will be a price equilibrium. With the ceiling, however, people are waiting in line, indicating that they would be willing to pay more for the bread if they could (the time spent waiting theoretically converts to money). Thus, consumer surplus increases. Or am I misunderstanding the question?

The MU question you quote is poorly worded. Here the proper answer would be:

C Indeterminate with the given information

First we can visualize it as shown on the diagrams shown below. Consumer surplus is the difference between willingness to pay (given by demand)`and price they actually pay so for all consumers it is the area below demand curve and above market price i.e. the blue area on the picture. Producer surplus is the difference between market price and price at which they are willing to supply so for all producers it is the area below market price and above supply curve i.e. the red area on picture below (you can see Mankiw Principles of Economics Ch 7 for more discussion on consumer and producer surplus). Without any price celling the market will be at equilibrium where supply equals demand so there will be no shortage. After price celling producers are only willing to supply $Q_S$ while people demand $Q_D$ resulting in shortage of the good of size $Q_D-Q_S$. Shortages can result in waiting lines as usually some non-market mechanism then takes over.

We know that total surplus of society shrinks because $CS+PS$ is definitely smaller as the total colored area shrinks. However, if we only look at $CS$ it is possible that it increases because consumers both loose part of their original surplus and gain part of the surplus that was originally belonging to producers. Whether $CS$ increases or decreases depends on whether the gain from appropriating part of producer surplus offsets the loss to $CS$ from consumers that no longer can get the good anymore.

Possibly, the question has a mistake and it was supposed to be total surplus where answer b) would be correct, or there are some unstated assumptions, such as that people experience disutility from queuing (reasonable but not explicitly mentioned in the question) which would lower CS further as it would impose additional costs on consumers. 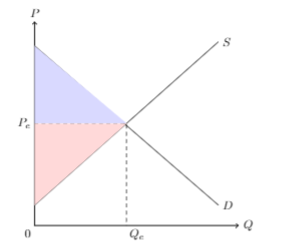 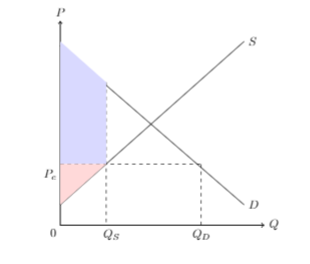 Not the answer you're looking for? Browse other questions tagged microeconomics self-study price nonexpert consumer-surplus or ask your own question.