I would really be thankful if any of you could check my answer to the following question.

Describe, using the IS-LM-BP model, the impact of a devaluation of the national currency under a fixed exchange rate system?

Under a fixed exchange rate system, a devaluation of the national currency by the monetary authority will increase the economy's exports (X) and decrease its imports (M), expanding its net exports (NX) and raising aggregate income (Y) thus shifting, both, the IS and BP curves to the right (IS0 to IS1, BP0 to BP1). At point A, the state of both balance of payments accounts improves due to devaluation of national currency and growth of interest rate. As a result, demand for the national currency increases. In order to maintain a fixed exchange rate, the Central Bank buys up foreign currency, thus increasing money supply and shifting the LM curve to the right (LM0 to LM1). As a result, the interest rate will decrease which will lead to equilibration of the balance of payments and restitution of the external balance at the point B. 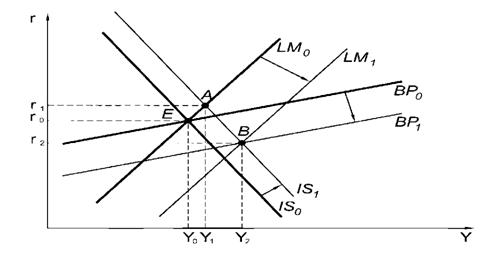 This looks good assuming that your country is a small country (i.e., the change in the domestic demand of foreign assets does not change the interest rate in the foreign country). To be clear on the full story, at point A, we have that the foreigners want domestic assets, and so that's why foreigners demand more domestic currency, and that's why (as you said) the Central Bank has to counteract by buying up foreign currency.

Not the answer you're looking for? Browse other questions tagged macroeconomics monetary-policy exchange-rates foreign-exchange or ask your own question.

5
Why was Swiss National Bank in red by keeping fix exchange rate to Euro?
3
Doubt in understanding the advantages of Fixed Exchange Rate
3
Why imports increase if higher relative inflation?
0
Balance of payments and the free floating exchange rate system
1
Mistake in Wikipedia article on Fixed exchange rate system?