This is a question from the CFA exam. With respect to utility theory, the most risk-averse investor will have an indifference curve with : (a) greatest slope coefficient (b) most convexity The answer is A but I think B is also correct. The utility function is described by $U=E(r)-\frac{1}{2}A\sigma^2$ where A is the measure of risk aversion. I want to understand this mathematically. How should we measure convexity? Is this just the second derivative or the curvature? And why is B incorrect? 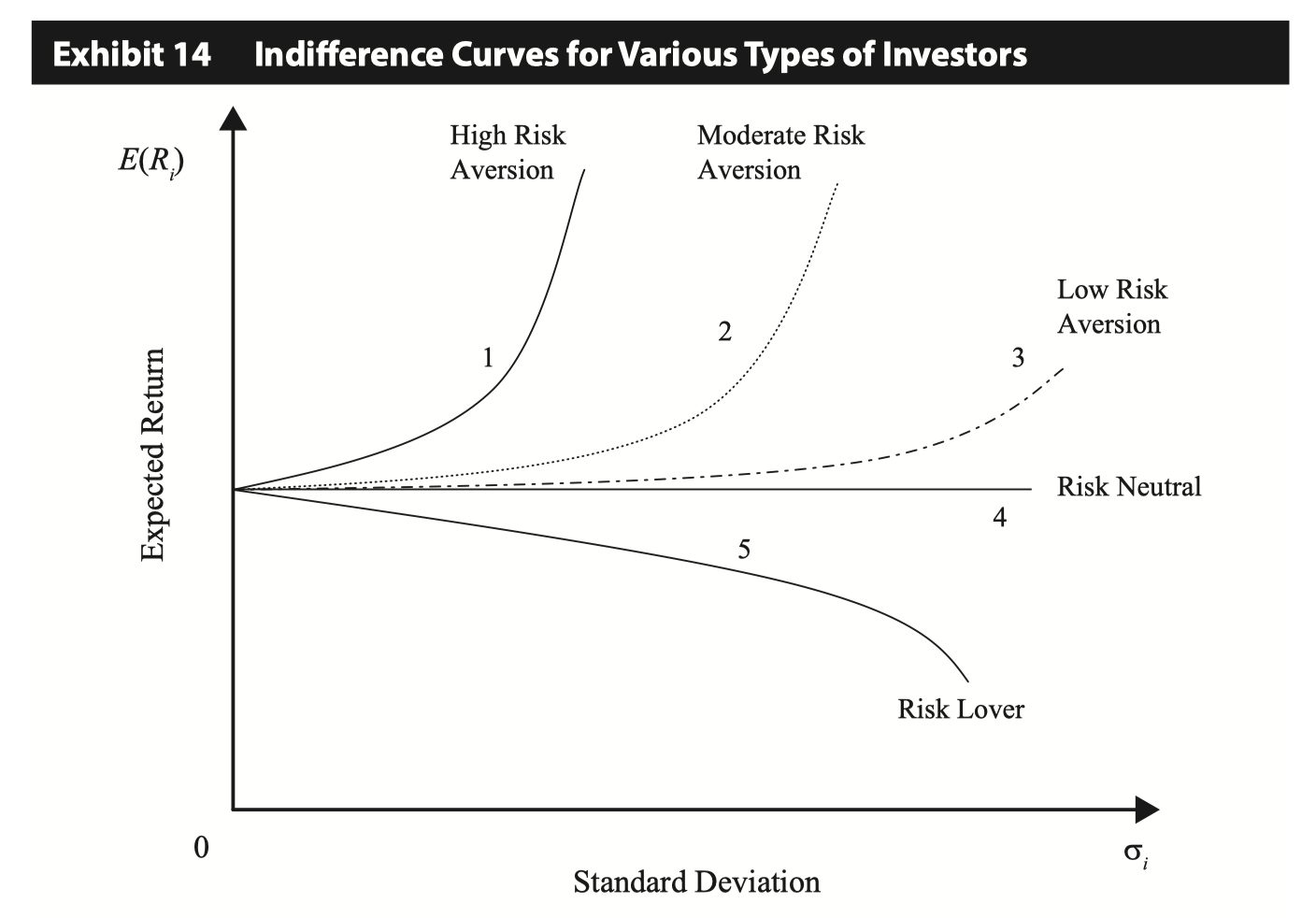 It would seem that both options are correct given the specific mean-variance utility function.

Use $\mu$ to denote the expected value. In the $(\sigma,\mu)$-plain, an indifference curve representing a particular utility level $\overline U$ is given by \begin{equation} \overline U=\mu-\frac12 A\sigma^2. \end{equation} Applying implicit differentiation, we can obtain the slope of the indifference curve to be \begin{equation} \frac{\partial \mu}{\partial \sigma}=A\sigma, \end{equation} which is increasing in $A$, the parameter of absolute risk aversion. This shows that option (a) is correct.

Moreover, if we measure the degree of convexity of the indifference curve by the value of its second derivative, we'd get \begin{equation} \frac{\partial^2\mu}{\partial \sigma^2}=A, \end{equation} which is again increasing in $A$. This suggests that option (b) is also correct.

This conclusion seems consistent with the graph you show: within risk aversion, the indifference curves with higher curvature are also the ones with steeper slopes.

This seems to be specific to the CFA exam and is a badly formulated question. First, an indifference curve for some fixed utility level can be viewed as a function mapping $\sigma$ to $\mu$. At any value of $\sigma$, this function has a slope (which is given by $\sigma A$). No economist would call this a "slope coefficient" in this context, as this term is only used in regression analysis. Second, convexity is a property of a function, not a quantity, so it makes little sense to use the term "most convexity".

If the second derivative (which is $A$) is used as a measure of "convexity", then both answers A and B are correct, which makes no sense in the context of a single choice exam question.

If the curvature of the function is used as a measure of "convexity", then this curvature is first increasing and then decreasing in $A$, so for a given value of $\sigma$ you can indeed have two investors with the first having a higher "slope coefficient" but a lower "convexity" than the second. With this interpretation, only answer A is correct. However, I doubt that it was this what the exam authors had in mind. I think it is more likely that they just posed a stupid question.

Not the answer you're looking for? Browse other questions tagged finance financial-economics portfolio-theory or ask your own question.

4
Portfolio choice problem of a CARA investor with n risky assets
4
Calculating mean variance portfolio with risk aversion parameter
14
Barro's (2009) rare disaster model in the AER: How to derive equation (10)?
2
Two asset Markowitz Portfolio Optimization and Capital-Market Line construction for a Given Risk Free Rate
5
given someone's past investing history, is there a way to calculate his risk aversion?
0
Certainty equivalent and risk aversion parameter given utility function
0
What is the Relationship between expected return and risk of corporate bonds?
2
Quadratic utility: monotonicity and risk aversion
1
How do I calculate the price and risk of a senior tranche?